Boys win plaque at annual race for the first time

On Friday, Oct. 30, the Haldane Cross Country teams travelled to Bowdoin Park in Wappinger Falls to compete in the annual Dutchess/Putnam County Championships.

The boys finished in third place, losing only to Arlington and Brewster, and won a plaque in the race for the first time in school history, while the girls running shorthanded finished a strong sixth. 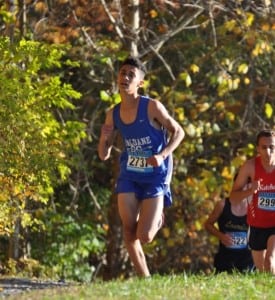 The Northern Counties is a tough race for us,” said Coach Tom Locascio. “All school sizes, from class A Arlington, to class D Haldane run in the same race.”

In the boys’ race, Theo Henderson finished first for Haldane and seventh overall with a time of 17:14. Nick Farrell was next at 17:49. Both Theo and Nick earned medals in a very competitive field. Adam Silhavy was next at 18:50 followed by Kenney McElroy, running his best race of the year at 18:53.

Jonas Petkus was close behind running an 18:57. Andrew Gannon and Ellis Osterfeld rounded out the top seven finishers for the Devils running a 19:22 and a 20:16.

“After losing the league championship to Pawling, it was especially rewarding to beat them out for the third place spot,” said Locascio.

On the girls’ side, Haldane was once again lead by Ruby McEwen, the captain, who finished eighth in the race, running a 20:58, which earned her the only Haldane girls’ medal. “Ruby is an excellent runner,” said Locascio. “In addition to being physically tough, it is her mental toughness that makes her a champion.

“They are peaking at the right time,” the coach said. “With a full squad next week, we should have four girls running 23 minutes or faster. I don’t recall that ever happening before.”

On Saturday, Nov. 7, both teams return to Bowdoin Park for the Section 1 Championship, where the boys will go for their eighth consecutive section championship and the girls will try to make it seven out of eight. The boys run at 11:30 a.m. and the girls at 1:30 p.m.