The Haldane girls’ varsity soccer team played in the Class C Sectional Championship at Arlington on Friday, Oct. 30, where Marina Martin led her Haldane teammates to victory by scoring four goals in the decisive 6-2 win over Solomon Schechter. 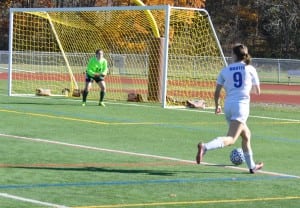 Marina Martin’s four goals led the Blue Devils to a 6-2 victory over Solomon Schechter in the Class C Sectional Championship on  Oct. 30 (photo by Peter Farrell)

The team then headed off to Middletown on Tuesday, Nov. 3, where they beat Seward 4-1 in the Class C Regional Semi-Finals. Leading the scoring for Haldane with two goals each were Marina Martin and Bailey McCollum.

Next up is a trip to Long Island on Saturday, Nov. 7, where they will take on Port Jefferson in the Section One Regional Final.