Beacon shop grew out of desire for slower pace

Kristy Carpenter’s professional life in New York City was emblematic of most people’s: fast paced. Working as a photographer for photojournalism agencies, her job seemed to dominate her life, and the work/play balance was skewed entirely one way, with constant meetings and everything moving at a frenetic clip.

Carpenter decided to make a major change. As a sideline, along with her former husband, at the dawn of the Etsy era, she started making wooden bookmarks, which they began selling at craft shows. “We met a whole new world of people, and I just decided I was sick of what I was doing, and tired of going into the city,” she says.

Six years ago, Carpenter changed directions entirely, and with a partner opened Clay, Wood & Cotton, a shop near the west end of Beacon’s Main Street that specializes in handmade items, most produced locally. After a two-year stretch in the one-room space that is now home to the Theo Ganz Studio, Carpenter’s partner decided to devote her time to her family in Brooklyn, so Carpenter took over and moved the shop to larger premises near the Bank Square Coffeehouse, expanding into two rooms, the second devoted to yarn and its uses. 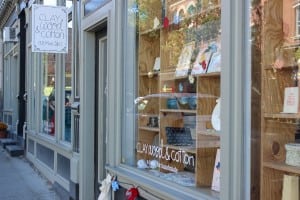 “Our goal was and is to support handmade products, to know who we’re working with, where we’re getting things from, and where things are being made,” she says. “Not all of what we have is local, but a lot of it is, and I’ve met most of the people who create what we sell, either at craft markets and fairs, or even through people walking through the door, telling me they make stuff — that can be great, or not so great.”

Of course, not everything makes it onto the shelves of the bright, white-walled space where the wooden shelves are lined with an array of textiles, ceramics, jewelry and more. Most of the stock is skewed toward items people can take home easily, as many customers are international tourists who stream out of nearby Dia:Beacon — CW&C is one of the first stores they encounter. Their favorite purchases are dish towels and art prints, Carpenter says.

CW&C also has its regulars, including a contingent of men who “come in here like clockwork, twice a year, for birthday and Mother’s Day cards — it’s very funny,” Carpenter says. And, in the ways that a shop can be more than that in a place like Beacon, Carpenter recently received a note from a customer she hadn’t seen in a while. It explained that the sender had moved back to Brooklyn and expressed appreciation for CW&C’s being so welcoming to her when she first moved to Beacon, not knowing anyone. “I came and hung out just to talk to someone — thanks for being so welcoming,” she wrote. 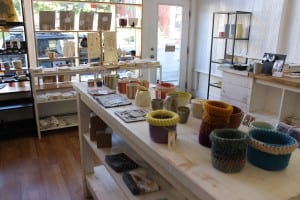 Inside Clay, Wood and Cotton (Photo by A. Rooney)

Like many a small business, CW&C does much of its advertising and marketing through social media, including Instagram and Facebook and its website. Sales went up every year after the 2009 opening, before plateauing this past year, something Carpenter blames squarely on last year’s ferocious winter weather. “Beacon retail is still dependent on weather,” she says.

At age 6, CW&C is heading toward a certain level of longevity in terms of Beacon shops. Carpenter feels its success is based on keeping prices accessible. “You can come in here and leave with something you love for under $25, and that’s important,” she says. Her prime location is also a factor as well as her six-days-a-week hours.

Carpenter also cross-promotes with complementary services, getting information out on crafting and knitting classes. The yarn component of the business stemmed from customers asking for it. Though it’s not a full-service yarn shop — “We’re a handmade store, with yarn,” Carpenter notes, CW&C “tries to hit all the basic types of yarn, including a line of American-milled and dyed. Knitting has changed a lot in recent years. So much of [shopping for] it is done online, especially the patterns — people don’t want to spend hours looking through books now.” 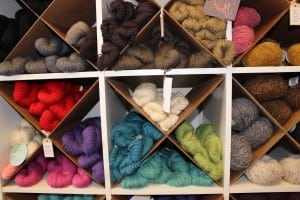 Bundles of wool, ready to be knitted (Photo by A. Rooney)

Even though Carpenter’s bank account isn’t as full as it was during her years working in the city, she says she has zero regrets over making the choice she did. “I’m living a more content life now, here,” she says. “Having something you really support, to work on, is great.”