Special classes for those in pain from war

Yoga offers a spiritually enlightening or physically curative reward to practitioners. Providing people with inner tools for focus, strength and flexibility, and restorative, deep relaxation, is especially pertinent to a population sorely in need of these things: veterans, particularly those seeking treatment at the Montrose Veterans Affairs campus. There, once a week, a yoga program is offered to inpatients in the Post-Traumatic Stress Disorder (PTSD) unit and in the Substance Abuse Treatment and Domicile program, which serves veterans who have been or are currently homeless.

During Veterans Day week, Nov. 6 to 15, Veterans Yoga Project (VYP), an educational and advocacy national nonprofit charity, is sponsoring more than 100 yoga teachers and studios across the country in hosting donation-based classes to raise money for programs that support veterans and their families. Cold Spring’s Kathie Scanlon, along with Wendy Terra, her fellow instructor at the V.A., will host a “trauma sensitive” yoga class at on Saturday Nov. 14 at 1 p.m., at Peekskill’s PranaMoon Studio in space donated by owner Ellen Forman of Garrison; 100 percent of all donations given will go to support VYP programs.

Scanlon has been teaching the yoga class at the Montrose V.A. for two years. She says that “yoga has become almost standard fare at V.A. facilities for people with PTSD.” Her class is filled with veterans from two units. The first, substance abuse, enrolls veterans in a 32-day in-treatment program. Their participation in the class is mandatory — they must come at least once, during the second week of their stay — though they may simply observe if they choose.

Others are from the domicile unit, which is a four-month-long in-patient program serving veterans who are homeless, which can mean anything from being out on the streets to just released from prison or estranged from their family. The domicile unit veterans are mandated to come to class four times during their stay. Some come for just the minimum while others attend every week. In the domicile program veterans are taught life skills designed to help them get a job and put their life back together. Because there is a constant changeover of veterans at the facility, the classes change in composition each week, sometimes with a sea of new faces. 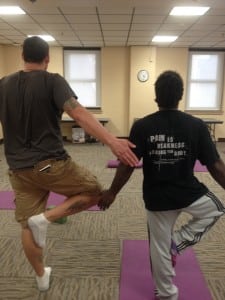 Scanlon calls “heartbreaking” what she sees, especially in the youngest veterans. “You can see the terror in their eyes; an inability to be comfortable in their bodies or on their mats. The really young ones almost always have seen active duty and are usually recently returned, over the past couple of years. You can see the trauma.” Scanlon says she can see the correlation of age to acceptance of yoga as potentially helpful. “The Vietnam-era vets often have more of the physical ailments: bad backs, bad knees, and they’re not always receptive. The younger guys are more like ‘anything that can help me,’” Scanlon says. The nature of the most recent conflicts is evidenced in how the younger veterans are presenting, “There are more kids with PTSD and it’s because of all the bombing and guerrilla warfare, the increase of firepower. So many have traumatic brain injuries.”

There is very specific training for those conducting yoga classes with veterans who might be suffering from PTSD. To start, Scanlon sets up the room differently to the usual fashion of rows. “I make sure that the guys have a lot of space between each other. I always have a wall behind them [not another person], so they can only look ahead. I position myself so that I am the closest to the door, and I put my back to it, so essentially I am ‘guarding’ the room. Often the people I can see a PTSD reaction in are people closest to the door.” Participation is never forced. “This could be a triggering situation for them — being on the floor on their backs,” Scanlon said. “But just being in the room is a good introduction and can have a calming effect. I work really hard in the first 15 minutes to establish a rapport with them, especially knowing this could be the one and only time they will have this experience. I joke with them and tell them that this is part yoga class, part stand-up. I try to give them the idea, in the initial minutes, that this could be something that could help them. For the most part, it’s pretty successful.”

Once the class begins, there are other differences from standard yoga class procedures. There’s no assisting or adjusting. There is an understanding that, because of injuries, including nerve damage all the way down to their feet, many will be unable to hold poses, and, at times, chair yoga is incorporated. Poses are chosen which focus on calming the nervous system: forward bends, inversions, lots of lower back release, nothing energizing.   “I almost always stay up in the front of the room. Before I even start walking I give everyone a heads up that I’m moving through the room. During the final period of relaxation, I ask them if I can turn off the fluorescent lights. There’s still lots of natural light. I close the door to give them a sense of privacy and security.” No music is played, as commonly-used “yoga music” can evoke traumatic memories. Scanlon watches her visual metaphors, often used to relax. Things as basic as “imagine you are sinking your toes into the sand” can have extremely negative connotations.

For Scanlon, what’s most essential in her work with the veterans is trying to establish “the connection they need back to their own body, seeing their body as a safe place to be. Helping them feel that they can re-inhabit their body and see it as dependable and reliable to them. In the two years I have been teaching these classes, there has not been a class in which someone did not express gratitude for the sense of well-being that yoga engenders. ”