Girls and boys both dominate at sectional race

The Haldane varsity cross-country teams both qualified to compete at the state championship after winning the Section 1 Class D Championships at Bowdoin Park on Nov. 7. The boys were crowned the champion for the eighth year in a row after easily defeating Keio, while the girls won by dominating Alexander Hamilton. 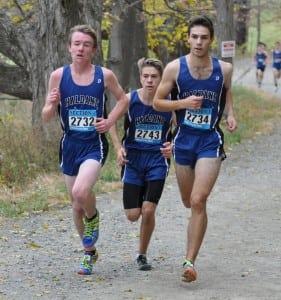 In the boy’s sectional race, Theo Henderson finished first with a time of 17:43, edging out teammate Nick Farrell, who ran a 17:47. “Theo and Nick ran together and far ahead of everyone else,” said Coach Tom Locascio. “They helped each other run a strong race.”

“This is the first time that a Haldane cross-country team has a good chance to win a state title,” Locascio said. “If we can finish on the medal stand in one of the top three spots, I will be thrilled.” The boys will run against Addison, Saquiot Valley, Lake Placid, Shelter Island, SS Seward, Notre Dame Elmira, Maple Grove, Maple Hill and Franklin.

In the girls’ race, Ruby McEwen won her third straight individual title with a time of 21:19, holding off teammate Taylor Farrell, who finished second in 21:36. The next four spots were taken by Haldane runners: Olivia McDermott ran third in 22:57, followed by Heather Winne (23:46), Abbey Stowell (24:11) and Wylie Thornquist (24:36). Meghan Ferri ran the course in 26:15.

“They ran very well today,” said Locascio. “Olivia has emerged as our solid third runner, Heather continues to run well and Abbey is hitting her stride at the right time. These girls will make the difference [at the state championship] as they support Ruby and Taylor who have run consistently well all year.”