Six-artist exhibit settles in for a stay at Matteawan Gallery

Its very name redolent of the region it inhabits, Beacon’s Matteawan Gallery interprets and celebrates that region — the Hudson Valley — in a new exhibit. Titled Myths & Legends, it offered the six artists participating a broad palette from which to take inspiration, and the results reflect not only a variety of media, but an eclectic response reflective of the area’s historic, literary and artistic variety and role as an incubator for ideas which then hatched elsewhere.

The artists involved, Deborah Brown, Deborah Davidovits, Scott Daniel Ellison, Valerie Hegarty, Jackie Mock and Wendy Small, have produced works in the form of photography, drawing, painting and sculpture. Matteawan Gallery Director, Karlyn Benson had this exhibit in mind for a long time, and she spent an extended period researching artists, who had either already created work which she thought might suit the subject matter, or those she felt might embrace different parts of it in creating new work for the occasion. 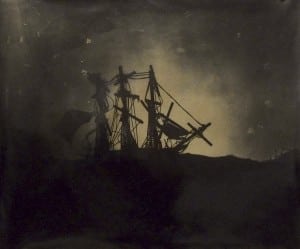 Matteawan’s recent shift to a much larger space allowed Benson to expand both the number of artists in a particular show and the expanse of ideas that comes naturally with that. Four of the participating artists in Myths & Legends live and work in New York City, while one (Davidovits) resides in Beacon and another (Ellison) in Cold Spring. Regardless, all have their own takes on the Hudson Valley. Complementing this, Philipstown storyteller Jonathan Kruk will spin some Hudson yarns at a free gallery talk on Nov. 29 at 3 p.m. — contact the gallery to reserve seats.

Sculptor Hegarty addresses the Hudson River School of Painting, printing out Frederic Edwin Church landscape paintings, then crumpling them in her hand and painting the crumpled artwork as a still life watercolor, this embodying “a striving for perfection and its necessary failures, as well as the destruction of the natural environment,” as noted in Matteawan’s description. 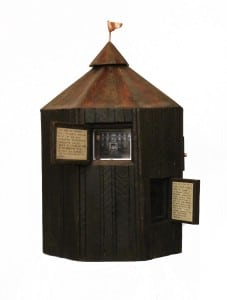 Delving back further in time, painter Ellison has imagined a pre-colonization Hudson Valley. Summoning up his youth spent outdoors in the woods, Ellison conjured what and who used to be there: a mastodon, a bald eagle and a Wappinger Indian.

In what is more of a springboard approach to the topic, Mock, who creates artworks which enhance the ordinary and celebrate the history imbued in found objects, took a road trip expressly to collect artifacts for a new centerpiece, a handmade cabinet which she constructed, then filled with artifacts relating to the beginning of the traveling American circus, in the Hudson Valley. Tucked away in the cabinet are soil samples from the site of a long-gone P.T. Barnum mansion and a piece of the pew from the church where General Tom Thumb was married.

Small had already created her photograms — pictures produced with photographic materials, such as light-sensitive paper, but without a camera — of sailing ships, but this topic prompted her to re-interpret them, imagining them as the ghost ships of legend: vessels navigating the Hudson which would disappear as other ships came close. Her darkened images, created using chemicals, objects and light, call to mind barges and other working ships. 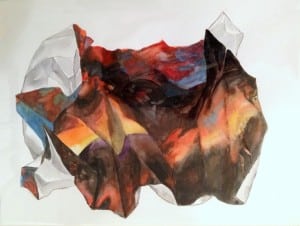 The prism of legend also inspired Davidovits, who addressed the real, but mythologized, figure of The Leatherman, a mysterious, eccentric itinerant traveler who roamed the Hudson Valley in the mid-19th century. Matteawan’s notes point out that though “much was made of his peculiar habits, what he wanted most was probably to be left alone.” Isolating elements of his appearance and way of living, Davidovits has drawn a boot, a cave opening, and a pie as well as a portrait of The Leatherman himself.

Brown’s portraits of individuals who could “inhabit the stately mansions and inns of the Hudson Valley” (from Matteawan Gallery notes), harken back to an amalgam of Classical and Baroque sculpture, 18th-century paintings and 19th-century novels. Brown’s paintings are “characterized by a tangle of brushwork verging on abstraction that somehow accentuates the feeling of being from the past.” 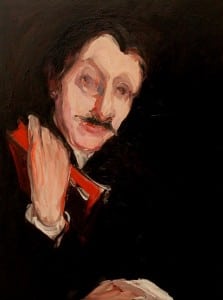 Deborah Brown, ”The Reader”, 2015, oil on Masonite.  Image courtesy of the artist

Benson heads to Brooklyn frequently to check out work being produced there. Artists she has previously shown at Matteawan have entered every configuration of the Brooklyn/Beacon nexus: some live in the city but like to come up to the Hudson Valley for frequent day trips, others prefer a more self-contained living and working in Beacon approach, and still others live in Beacon but head into the city for a few days each week, mixing urban and town worlds.

Benson has found that there is “more and more cachet and excitement related to showing in Beacon. No one views coming up as a chore any more. And they’re aware that [people who work at] Dia come to see the work here. In fact, they wind up coming again and again,” she says.