Ceremony honored those who have served 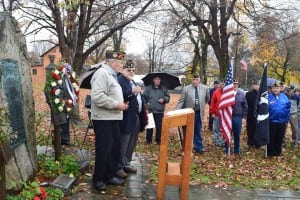 Despite overcast skies and a light rain, more than 60 veterans, residents and local leaders came out on Nov. 11 to honor those who have served in the U.S. Armed Forces as part of Cold Spring’s 2015 Veterans Day ceremony at the war memorial below St. Mary-in-the-Highlands Episcopal Church.