How much do black lives matter in American law and culture? 3 ½ Minutes, Ten Bullets, Marc Silver’s quietly probing, deeply affecting film speaks eloquently to this question in a story that unfolded in Jacksonville, Florida, well before the police killing of Michael Brown in Ferguson, Missouri gave rise to the Black Lives Matter movement and made that question part of our tortured national conversation on race. The film, which premiered at Sundance last January and won the Special Jury Prize there, will be screened at the Philipstown Depot Theatre at 7:30 p.m. on Friday, Nov. 20, with producer Carolyn Hepburn as special guest.

On Black Friday, the day after Thanksgiving in 2012, 45-year-old Michael Dunn pulled into a gas station and parked next to a car with four teenage boys who were listening loudly to rap music. An argument began about the volume of the music and ended when Dunn pulled out a gun and fired 10 bullets into the boys’ car. Three of those bullets killed 17-year-old Jordan Davis. Arrested the next day, Dunn said he shot in self-defense. Dunn is white, the teenagers, black. 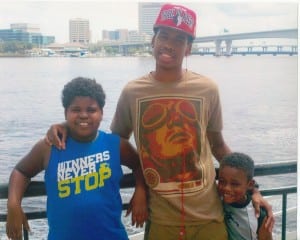 “I made the film 3 ½ Minutes because I was fascinated how racial profiling, gun rights, and self-defense laws came together to tragic effect in that very short period of time,” said Silver. “I found it impossible to turn my gaze away from the racism, and yet people were going out of their way to deny the racism at its heart. Not only did Dunn consider himself an innocent victim, but the case itself was not considered a hate crime.”

In fact, the ghost of another black 17-year-old, Trayvon Martin, whose white killer was acquitted earlier that year because of Florida’s infamous “Stand Your Ground” law, is an unquiet presence hovering over all, as Dunn, and his attorney at trial, argue self-defense, and Lucia McBath and Ron Davis, Jordan Davis’ parents, fear the worst. 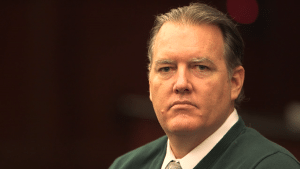 Silver does not use a narrator, but allows the characters to speak for themselves and the trial to unfold in real time. In addition, editors Emiliano Battista and Gideon Gold seamlessly and to great effect cut in a variety of audio and video footage, including the initial police interrogation of Dunn, call-in radio commentary, Dunn’s jailhouse calls to his girlfriend, and surveillance videos from the gas station at the time of the incident. 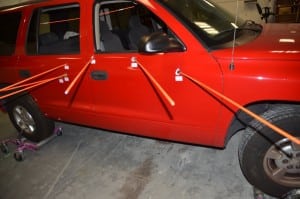 A police evidence photo shows where the bullets struck the vehicle.

On one level 3 ½ Minutes is a courtroom procedural, and on another level an intimate look at how the killing of Jordan Davis affected his parents, the three young friends who were with him when he died, and, to a lesser degree, the larger community of Jacksonville. Both McBath and Davis were still deeply traumatized as the trial got underway by the loss of their son, and Silver’s sensitive camera — he is the cinematographer — is able to bring us close to their sorrow as witnesses rather than as spectators, even as we see them as spectators at the trial, reliving the awful details of their son’s killing. 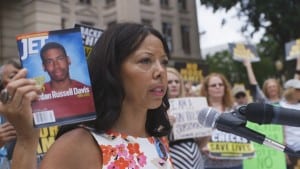 Silver had worked out an arrangement that allowed him to film from the rear of the court chambers, the only restriction being that he could not film the jury. And as we watch the judge and other court personnel, and the defendant and witnesses being questioned by the attorneys, and weigh the arguments and the evidence, we, in a sense, become the jury. The effect is riveting.

The Philipstown Depot Theatre is located on Garrison’s Landing in Garrison. Call 845-424-3900. For tickets, visit brownpapertickets.com.