Prayer can take any number of forms, and can occur at any given time. Vespers are evening prayers, and jazz vespers is a way of experiencing music in ways beyond the aural. The Jazz Vespers “services,” which have been heard and felt at Cold Spring’s First Presbyterian Church (FPC) for around 15 years now, call upon the music itself, unleavened by much overt accompanying sermonizing, to bring its players and listeners into a heightened, reflective state of being.

Described by the church as “informal, peaceful and full of inspiring words and music,” Jazz Vespers is held on the third Saturday of each month at 5:30 p.m., September through May. November’s edition, on Nov. 21, features guitarist John Stowell and drummer Sylvia Cuenca, along with Rob Scheps on soprano saxophone and flute and Cameron Brown on bass. A wine and cheese reception follows the program. 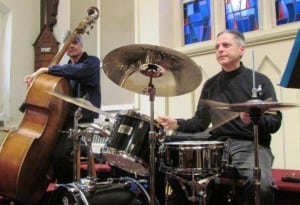 Tom McCoy, minister of music for FPC, has been music director for the vespers sessions for all of its existence, working first with FCP’s former pastor, Rev. Bill Weisenbach, who served at the church until 2002, and, for the past 13 years, with its current pastor, Rev. Leslie Mott. Before McCoy arrived, the musical component of the church services was performed on an organ. McCoy helped FPC find a piano, which he still plays today. The nascent Jazz Vespers consisted of, as McCoy remembers it, “more or less the opening of the hymnal, and then they started playing jazz. It soon became apparent that that didn’t work and I realized that I needed to start creating specific jazz charts for vespers.” Handily, McCoy had the expertise to do so, as professionally he works as a bandleader, teacher, arranger, and composer.

McCoy says the parishioners at FPC have always been supportive of the service, right from the start. “There was no one opposed to starting it, though many people were not all that aware of it for quite some time. For that reason, Leslie suggested that occasionally we would have jazz Sundays, after a Jazz Vespers Saturday; in lieu of the regular service we’d have a repeat, plus the church choir would do a jazz number and the whole congregation would have a better sense of what we were doing.” 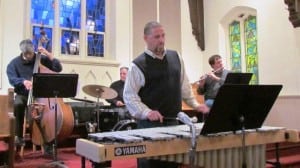 The change in ministry was reflected in the non-denominational vespers service, with Rev. Mott changing the opening sermon into a facilitated discussion. Quotes are handed out on a particular theme, which ties in to the music to be played. Those attending may choose to read, make a comment, or both — or simply observe and listen. In most ways, the service has remained consistent through the years, with opening announcements and a prayer or meditation followed by a congregational hymn, and then a jazz performance.

Top musicians were immediately drawn to playing at the service. They included players like Ed Xiques, a saxophonist who worked in the Thad Jones-Mel Lewis Band for a dozen years, whom McCoy knew through work at the Hudson Valley Philharmonic, and bassist Brown, who “has worked with everyone,” according to McCoy. They are drawn to vespers for “a variety of reasons, but especially the combination of spirituality and jazz joined together. For those players who came first ‘just because it was a gig’ — they’ve left with some sense of the magic of it. Take our most illustrious guest, [renowned jazz singer] Sheila Jordan. She loved it and she’ll be back. We get quite a turnout when she sings … or René Bailey, who used to perform with Louis Armstrong.”

Clarinetist Gareth Guest, who now assists McCoy in putting the programs together, and sits in on some sessions, describes Bailey as having “the kind of voice that brings down the house — she has deep Georgia gospel roots; she melts the snow! These singers get caught up in it,” Guest says. An added bonus is the timeframe of the concerts — the afternoon hours allow the musicians time to get to evening gigs.

The program supports itself, which is critical, according to Guest. “The church has limited funds so it’s always important that Jazz Vespers pulls its own weight, financially, which it does. Part of what it does is to reach out — to Beacon, Peekskill, so it is also a missionary sort of endeavor,” he says. “Last season was particularly successful. We reached a lot of people.” McCoy adds: “We don’t pay a lot — the musicians come because they genuinely enjoy it. Musically it has been an unusual opportunity to have world-class jazz artists play at virtually no cost. We don’t receive an offering, so contributions are welcome and we have benefactors — but of course we’re always looking for more!” The musicians always give raves to the acoustics, Guest noting that “It is so kind to woodwinds.”

For local percussionist Mike LaRocco, who is a staple at Jazz Vespers, it’s much more than just another set. “I’ve been performing with Tom and the other incredible musicians for over a decade. Each service is unique and it brings world-class music to our community. It is an honor to be a part of it,” he says. Sometimes local vocalists join in as well. McCoy mentions Cold Spring’s Lisa Sabin, whom he describes as “always good at finding material which is secular but suggestive of an uplifting spiritual feel.” Putting the programs together is like “looking at the blank page or a blank canvas,” McCoy says, continuing, “there’s a little terror involved. Usually we come up with a theme, which could be specific or broad.” 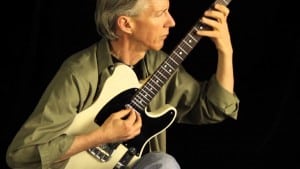 John Stowell, who will perform at the next Jazz Vespers, on Nov. 21.  Image courtesy of Jazz Vespers

Jazz Vespers services are open to everyone, whatever their spiritual bent is. Children are welcome. McCoy sums it up: “It’s not so much a blending of traditions, but coming at spirituality from a non-dogmatic point of view. It is definitely a hallmark of this congregation over the years that many are drawn to it by a sense of community. They have included people who were maybe agnostic, even bordering on atheist, Jewish, Buddhists, but they have felt comfortable being there as part of a group of people interested in spiritual values. Jazz Vespers is an extension of that.”