It was chilly and windy day on Saturday, Nov. 14, at Monroe-Woodbury High School, the site of the state public high school cross-country championships. The Haldane boys entered the meet with a legitimate chance to compete for their first Class D state title. “I knew going in it was going to come down to one of four teams: Haldane, Lake Placid, Maple Grove and Saquoit Valley,” said Coach Tom Locascio. “We have been building for nine years to get this opportunity.” 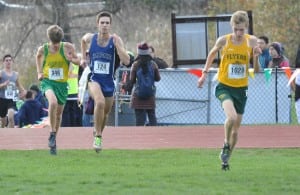 Theo Henderson races to his nine-place finish at the Class D state championship on Nov. 14. (Photo by Peter Farrell)

Run at 10:15 a.m. in front of a great crowd with a strong Haldane fan base, the first half mile played out with no surprises. All that would soon change. As the runners neared the end of Mile One, the expected order of finish was already in jeopardy. That was just the beginning of a tough day.

“Several of our runners were not placing as I had anticipated,” Locascio said. “I know what it takes to get to this meet, and for these kids to encounter difficulties made me feel for them. You work hard, run hundreds of miles and then to not have the opportunity to run your best is really sad.” 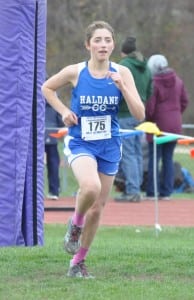 Wylie Thornquist heads for the finish line at the state championship race on Nov. 14. (Photo by Peter Farrell)

As it turned out, despite a slightly disappointing finish, the boys still finished fifth, a school best, including an individual ninth-place finish from Theo Henderson, who completed the 5,000-meter course in 17:07, a Haldane state meet record. He was followed by Adam Silhavy at 18:07, Kenney McElroy at 18:46, Nick Farrell at 19:38; Andrew Gannon was the last scoring Haldane runner at 19:46. Ellis Osterfeld and Jonas Petkus finished in 20:05 and 20:11, respectively.

The girls raced at 12:10 p.m., the last competition of the day. “I didn’t know how we would do this year,” said Locascio. “All I knew was that my girls were running better each week and that their competition today would be fierce.”

Team Captain Ruby McEwen once again led the Haldane pack, finishing 31st in 21:07. Taylor Farrell was second for the Blue Devils in 21:45, and Olivia McDermott, with a strong final 400 meters, edged out Heather Winne for third. McDermott ran a 22:37 and Winne a 22:47. Abbey Stowell ran 23:57 and won the final scoring spot for the second week in a row.

“When we really need her, Abbey always runs her fastest times,” Locascio said. Rounding out the final seven, Wylie Thornquist ran a 24:11 and Meghan Ferri ran a 24:42.

“The girls were so close to finishing fifth as the boys did,” Locascio said. “Only 12 points separated our eighth-place finish from fifth.”

With only Wylie Thornquist graduating this year, the girls’ team is in great shape to move up a few notches in 2016 should it return to the state meet.