Seventh graders fan out in villages

Always looking for a way to bridge school and community, Haldane initiated what it hopes is the beginning of a twice-a-year tradition: dispersing its entire seventh-grade class into the community to participate in small projects benefiting local entities. Organized by Middle School Assistant Principal Julia Sniffen and PTA Gang Up For Good Committee Chair Danielle Pack McCarthy, the goal was to encourage a deeper connection between the students and the community they live in.

This was triggered by, according to Sniffen, the Gang Up For Good Committee’s asking what the school could do to enhance the understanding of doing good for others. “Putting them to work, giving them service tasks, and giving them a bigger picture” were the goals, Sniffen said, adding that this also reflected conclusions reached in Haldane’s recently concluded Strategic Plan sessions. In addition, coming to more of an understanding about service makes the senior year service trip to New Orleans (planned for April, in its third go-round) the capstone of earlier exposure and experience to it. 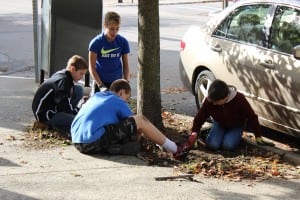 Pack McCarthy then reached out to a cross-section of community organizations — nature centers, libraries and sports groups among them — and proposed this day, asking them to come up with projects for the students. Once the school year began, each class talked about service and the myriad benefits for both the server and the served.

Each student was asked to rate the top three activity preferences from a list of five and everyone was placed in one of their top two. Their choices were: Main Street tree clean-up work; cleaning and maintaining the Nelsonville Trail; visiting and helping seniors at the senior center during lunchtime; organizing donated Little League equipment to be given to youth in need of it; and assisting Butterfield Library with general seasonal activities. 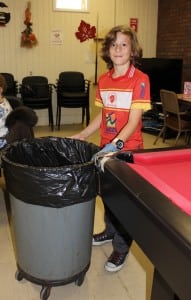 Haldane 7th-grader Frank Bentkowski is charge of keeping it clean at the Cedar Street seniors’ center, during Service Day.  Photo by A. Rooney

On Friday, Nov. 13, service teams could be spotted everywhere. Groups, accompanied by teachers and aides, worked under the direction of someone from the organization they were helping. At the gateway to the Nelsonville Trail, Parks employee Evan Thompson gave his group a quick tutorial on trail markers and how to follow trails before the group headed into the woods to perform maintenance tasks. Seventh-grader Ashley Hotaling, a member of this group, thought Service Day was a positive thing, saying that “we can help clean up the town, give the seniors some company and help others around town.” Teacher aide Doreen Ferris concurred, noting: “It’s a great idea — it gets them to think beyond themselves.”

A few minutes away, the Cedar Street senior center was a bustling place, every table filled with people at opposite ends of the age spectrum, and conversation was animated. Seventh-grader Zoe Silverman, who had visited the center previously with her Girl Scout troop singing holiday carols, was also positive about the experience, calling it “helpful to the community and fun too.” Haldane middle school guidance counselor Carol Storey, surveying the action, gave it the thumbs up. “Anytime you get the students out, interacting with other people, it’s beneficial,” Storey said.

On Main Street, windswept kids were hunched around tree pits, hard at work, weeding. Kory Riesterer and Jennifer Zwarich of the Cold Spring Tree Advisory Board had devised a plotted-out “Action Plan” for the day, complete with a diagram of all the plantings and specific, rotating, tasks for each of two groups. 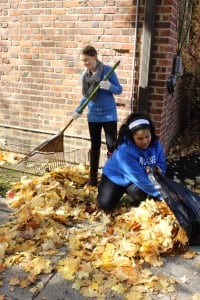 At Butterfield Library, seasonal activities translated into much raking of leaves, doing battle with the wind. Asked why she chose the library for her service, seventh-grader Arden Conybear was thoughtful: “If you think positively about it, you can make it really fun and it feels really nice to help the library. I love the library; it’s a very pretty place and the people who work there are so nice. We’re really helping it look cleaner and if it does, maybe more people will come and find it appealing to enter.”

Her cohort in raking, Sydney Light, called the day “a nice way to show your appreciation to the community and the library. A lot of people come here and don’t appreciate it as much as they should. Most kids wouldn’t think of themselves doing community service unless it’s introduced to them. Now they’ll try it and might do it more often.”

Sniffen hopes that Service Day will expand, first to twice a year, and then perhaps to other grades as well, in years to come. She sees the possibilities as limitless: assisting the food pantry, helping out at one of the pre-schools. Of community service in general, Sniffen stated, “It’s who we are; it’s what Haldane really is.”