The Brewster Bulldogs’ entry into the six-team Federal Hockey League means that fans in Putnam County now have a local professional team to cheer for. The Bulldogs, Army’s Black Knights and a bumper crop of Haldane student-athletes skating for the Hendrick Hudson High School Sailors, give fans three brands of hockey to choose from during the just-underway 2015-16 season.

The Federal Hockey League was launched in 2010 and, besides Brewster, includes teams in Danbury, Connecticut; Danville, Illinois; Port Huron, Michigan; Dayton, Ohio and Berlin. New Hampshire. Brewster’s first-year team also features a rookie coach, David Lun, who spent four seasons as a player in the Federal League before moving behind the bench. 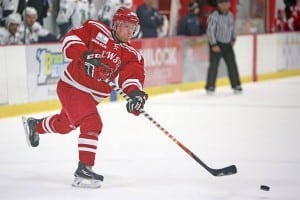 A Brewster player takes a shot on goal (photo provided)

“Our players average 22 or 23 years of age and come from across the U.S. as well as from Canada and Russia,” he said. “We’re a hard-working, blue-collar team.”

After four games, Brewster stands in fourth place, good enough to make the playoffs if they maintain that pace. Lun lists forwards Mike Zanella of Ithaca and John Scully, of Arlington Heights, Illinois, along with goalie James Robbins from Rockford, Ill., as early-season standouts.

The Bulldogs will play a 56-game schedule with home games at the Brewster Ice Arena at 63 Fields Lane. Ticket prices are $15.75 for adults and $11 for children. The next home game is at 7:35 p.m. on Friday, Nov. 27. A full schedule and ticket information is online at brewsterbulldogsprohockey.com or call 845-302-0077.

Army’s Black Knights, whose season began on Oct. 9, play 33 games, mostly against opponents from the Atlantic Hockey Conference. The team has a traditional rivalry with Air Force and hosts the Falcons at the Hollender Center at West Point for back-to-back games on Jan. 15 and 16. 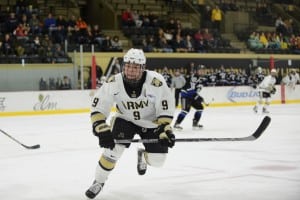 Although the Black Knight lineup includes 19 returning players, this year’s team has only five seniors. Its record as of Nov. 20 is one win (against Connecticut), two ties and five losses. The next home games are Friday, Nov. 20, and Saturday, Nov. 21, at 7:05 p.m., against Robert Morris, followed by a game on Dec. 5 against Sacred Heart University of Fairfield, Connecticut. Tickets, which cost $9 to $20, can be purchased at goarmywestpoint.com, by calling 1-877-849-2769 and at the West Point ticket office at Gate 3 of Michie Stadium.

Head Coach Mike Grean is big on this year’s Sailors, which combines players from Haldane and Hendrick Hudson high schools. “They’re hungry,” said Grean, who lives in Cold Spring. “They want to win. They want it bad.” That desire stems in large part from a successful 2014-15 season, during which the team reached the final four of the state championships for the first time. With a good crop of seniors and solid goal-tending, Grean said the goal is nothing short of the championship.

The Sailors play a 20-game schedule with home games held at the Ice Time Sports Complex in Newburgh. The season gets underway on the road against Carmel High School on Friday, Nov. 27, at 8 p.m. at Brewster Arena. The first game at Ice Time is scheduled for 8 p.m. on Friday, Dec. 4, against Cross River’s John Jay High.