The action occurred at Town Hall at a special meeting that involved touches of drama over pay increases for the councilors and supervisor and a staff reshuffling in the clerk’s office.

With an increase of approximately 1 percent over the 2015 tax levy, the new budget stays within the New York State-mandated cap. It represents tax rates of 2.37 percent per $1,000 of value (up from 2.30 in 2015) for property-owners who fund overall town-wide functions, and 3.45 percent (down slightly from 3.46) for those who live outside Cold Spring and Nelsonville and get certain town services.

Fire protection costs will hold steady, with increases of 1 percent for the Continental Village Fire Department, Garrison Volunteer Fire Company, and North Highlands Fire Department, and a zero percent increase for Cold Spring Fire Company No. 1, which serves parts of the town. For 2016, the firefighting allocation is $260,994 for Continental Village; $610,552 for Garrison; $740,015 for North Highlands, and $64,425 for Cold Spring.

The $261,000 for the Philipstown Volunteer Ambulance Corps tops the 2015 amount by $37,070, or 17 percent, an increase that Shea attributed to dire needs, including payments on a new ambulance. “There’s no way around it. Without it, they’re not going to be able to provide service,” he said. The Garrison Volunteer Ambulance Corps budget share will go from $170,000 to $171,241.

Van Tassel and Montgomery recommended initiatives to get the two ambulance corps, both of which rely heavily but not entirely on volunteers, to begin pooling their personnel and staffing arrangements. The board discussed mandating such changes in 2016, but opted instead to set aside $10,000 as an incentive for the two corps to collaborate.

“If they pooled their people, it would certainly improve the services,” Van Tassel commented.

With the pending retirement of a deputy town clerk, the board decided to reduce the number of deputy clerks from two to one and hire a “floating” professional to handle responsibilities as needed not only for the clerk but for several other departments.

“We’re eliminating the position to save the taxpayers money, to really make our offices more efficient,” Montgomery said. “It makes sense” economically. And if it means the elimination of some things currently done by the clerk’s office, “we can re-invent how they’re done,” she added. 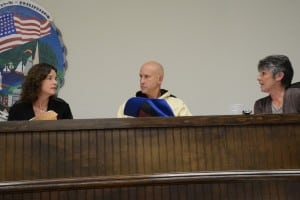 In an email alert Tuesday night, Merando warned that “due to potential budget cuts in the Town Clerk’s Office the information posted to the town’s website and municipal channel will be limited.”

Thursday night, Merando objected further to the new staffing arrangement. “I don’t see how you can justify it,” she said. “The town is getting busier. I cannot do the work we were doing before,” without the second deputy clerk. She reminded the board that she won re-election easily this month, an indication voters “think I’m doing a good job.” Reconfiguring things “is almost a way to undermine the accomplishment’s I’ve achieved,” she said. “You have nothing to say about how I run my office. The only thing the Town Board does is fund my office.”

“I don’t want to bring politics into this,” since a routine retirement provided a chance to rethink operations, Shea responded. “I think we can get by” with the altered staffing, he concluded.

The meeting began with the four councilors’ refusal to accept raises of $1,000 each and their attempts to instead give it to Shea. Coming atop the $1,000 pay hike already planned for him, their move would have brought his total pay as supervisor to $31,000. Shea, however, rejected the additional $4,000 and urged that it be saved to meet tax-cap demands next year.

Promoting higher pay for the supervisor, Montgomery pointed out that most towns in Putnam County regard supervisors as full-time officials, earning $80,000 to $120,000. “It’s not me that needs the raise at this point, it’s you,” she told Shea.

Shea agreed that someday soon his job should officially become fulltime, with higher pay. “It is a big responsibility. You run the town.” He proposed that changes be considered for the town supervisor election in 2017, “so the next person” benefits – a hint that perhaps, after a fourth term that begins in January, he will not run again.

He also took responsibility for unilaterally penciling in the councilor raises in a late budget draft and criticized the Putnam County News and Recorder’s coverage of the proposal. It ran a Nov. 18 front-page story: “Democrat Town Board Members To Give Themselves $1,000 Raises Thursday Night.”

“I thought that was inaccurate and gives people bad information,” Shea said.