A trio of masters of the spy-crime thriller genre enlightened and entertained an appreciative audience of 80 people last Sunday (Nov. 22) at a forum sponsored by Philipstown.info/The Paper. The event, held at Winter Hill in Garrison, raised funds for the nonprofit news organization.

Ru Rauch, a former Time magazine bureau chief in several European and South American cities (and a member of the Philipstown Info Inc. board), moderated the panel, which included local residents David Duffy and Alex Berenson as well as New York City resident Joseph Kanon. The award-winning and best-selling authors took turns providing insights into the mystery of writing mysteries, the origins of their books, other authors they admire, the state of publishing and problems when Hollywood calls. 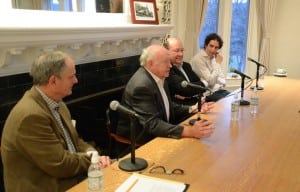 Rauch began the proceedings humorously by asking the audience to guess which of the authors was a real-life spy, supplying tantalizing biographical details and references from their work to fuel suspicions. No confirmations or denials came forth in the ensuing laughter.

Asked first by Rauch to describe the process they employed for getting a book underway, each described a different starting point.

Alex Berenson, author of nine books in a series about CIA operative John Wells already published (a 10th is due in February 2016), admitted to a problem created by his success with one character. “If you are trying to write about the real world you wind up constraining yourself.” He explained that Wells already had a revealed past going back to Afghanistan prior to 9/11, and the character could not change much as he aged from whom he already is. “Wells is not going to learn French and start oil painting,” said Berenson. “So I am trying to find stories that fit the narrative I’ve already constructed.”

David Duffy replied: “For me [a story] starts with a character. So suppose you’re a Russian kid with a horrific name [Turbo is the short version] and you grow up in the Gulag labor camps where people aren’t kind …and then at a certain age you develop a facility for languages and draw the interest of the local KGB. They’re going to recruit you. And you’re going to be one tough S.O.B.” Duffy has authored two crime novels with a few characters that have history with security services. For inspiration, Duffy said he reads a lot of newspapers (including this one). “You see stories everyday. I take disparate things and try to string them together.”

Visiting new places is how Kanon finds his inspiration for his period novels. His trips to cities such as Istanbul, Turkey; Berlin, Germany; and Los Alamos, New Mexico, where the atomic bomb used in World War ll was developed, have all inspired settings for his novels. 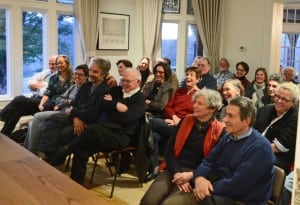 Part of the audience for the writers forum (photo by K.E. Foley)

Kanon said a lot of fiction is driven by the question “what if it were you?” He told of how a 1995 visit to Los Alamos piqued his curiosity about the lives of the people who worked there in the 1940s as he was reading what he saw as revisionist history about how atom bombs were created. He asked the audience to imagine being a physics student and receiving an invitation “to work with Nobel Prize scientists, cross frontiers of science, solve one of the riddles of the universe and win the war for us. Would I have gone? Yes, I would have gone,” as his characters do in his first novel, Los Alamos.

Rauch observed that spy or crime thrillers attract so many readers because their heroes face tough decisions with no easy right answers. These protagonists must sometimes make their own rules rather than follow orders from bosses or guidance from conventional morality, and that independent thinking has an appeal.

The authors gave evidence to support the point. Berenson said his John Wells had given up on the idea that doing the right thing mattered in the long run. Kanon said we all actually faced tough choices in our lives, and his books just took them to a more heightened dramatic place.

Duffy said readers engaged with crime drama because the protagonists are running into bad situations, making judgments about what to do — often outside the law — and always with paying the price.

In response to a Rauch query on research for books, the writers concurred that getting details correct was important and that readers often called them out on inevitable mistakes. “We’ve gotten to the point where we have so much spin in public life that we now demand accuracy in our fiction,” said Kanon to audience amusement. 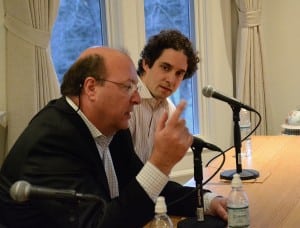 The writers all said they tried to travel to the places they write about to discover interesting aspects of characters’ lives, such as where they lived, whether they could have walked to work or what restaurant they may have liked.

Although he writes about the CIA and other government intelligence agencies, Berenson, a former New York Times reporter, said he uses open source material and doesn’t have special contacts with access to secrets. He wryly noted he is still waiting for a call from the CIA that offers him a tour of its Langley headquarters.

Kanon spoke of the legendary John Le Carre’s innovation and influence in the espionage genre. “His genius was to make his books more about office life [rather than operations] and things we can all understand, like working for a jerk. What he really knows is bureaucracy and how it functions. Everyone can relate to it.”

“To give the bad guy or girl [in a story] some sympathetic qualities so the reader has empathy for them is a tricky thing but necessary to engage readers,” said Duffy.

In a discussion of terrible historic figures such Stalin and Hitler, Kanon said he wanted more to explore the everyday characters who went along with things, who let it happen. He sees these people as those closest to our own lives and the decisions we face.

Berenson candidly said his books were too masculine and praised Kanon for his ability to better weave romantic and sexual relationships into his stories. After declaring sex was hard but very necessary to write about, Kanon told an amusing anecdote about his son hearing about sex scenes in his books from a fellow college student and then finally deciding to read his father’s books.

The writers celebrated the solitary nature of writing and the individual control of the material as opposed to the necessity of collaboration inherent in television and movie making. Berenson pointed out that authors had as much or greater chances to make money as Hollywood writers despite the very high-end money often talked about. Duffy emphasized that skills were not easily transferable from one medium to another.

Kanon, whose book The Good German was made into a movie, told of his travails in trying to be quiet about changes in the script from his book. (“I just wanted a paperback edition with George Clooney on the cover.”) But he had to draw the line at the new ending the scriptwriters had created. “I said to them: I know you want to avoid a resonance with Casablanca so you don’t want an airport scene [as the main character leaves Berlin]. But you have her leaving by ship and Berlin is land-locked.” He explained it might not be a problem in America but it could be in the European market.