Representatives of jurisdictions ranging from volunteer fire departments to New York State government convened in the Cold Spring firehouse Wednesday evening (Dec. 2) to confront the thorny question of who’s responsible for rescuing lost or injured visitors on state land in the Hudson Highlands.

Organized by Putnam County Legislator Barbara Scuccimarra, the forum reflected concern about over-burdening volunteer firefighters with calls from hikers stranded on mountains, especially precipitous Breakneck Ridge, said to be among the most popular day-hike destinations in the nation.

One point made by park officials: Firefighters often do not need to answer calls from hikers; that’s the job of state park police and rangers, with the latter having some emergency medical training, plus other skills. 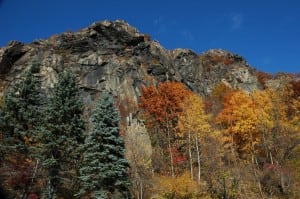 Participants agreed, though, that frequently in cases involving injuries, local ambulances and firefighters necessarily get involved.

As the 90-minute, round-table discussion continued, progress — if not permanent solutions — seemed apparent, with reports of efforts already underway and others pending or recommended. These include:

Corralling of data on the number of lost hikers aided by the staff at Hudson Highlands and Fahnestock State parks;

Creation of a “text blast” system to immediately alert all pertinent agencies (park police, other law enforcement, firefighters and other emergency responders) of calls on state park land;

Continued pursuit of grant funding for training a rapid-response rope rescue team in Putnam County, with hopes of training beginning as early as this winter;

Compilation locally of a list of old roads that could be re-opened into state park property to facilitate easier retrieval of injured hikers;

Work by a recently formed state parks task force to consider ways to deal with garbage, trail deterioration, graffiti, and other problems.

According to Steve Smith, assistant chief of Cold Spring Fire Company No. 1, so far in 2015 the company has received 21 calls at Breakneck requiring intervention. Of those, most involved at least 2.5 and often four to five hours of work, he said.

“Where’s the assistance and support from the parks, to try to do something to help us?” he asked at the forum, pointing out that an estimated 1,000 visitors a day are thought to go up the Breakneck Trail on weekends. 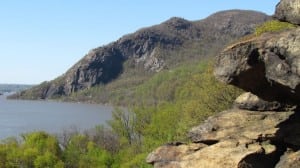 A view of Breakneck Ridge from the cliffs at Little Stony Point (file photo by M. Turton)

“We do respond to our calls,” replied Linda G. Cooper, director of the Taconic Region of the New York State Office of Parks, Recreation and Historic Preservation. “When people are dialing 911 and the calls are sometimes directed into the fire department, that may be causing you to respond when you do not need to. Our park police go into the woods to find people. We don’t think the fire departments should be responding to everything.”

One factor may be the way dispatchers in Putnam County or across the river in Orange County route 911 calls.

Capt. Michael Cappuccilli of the State Park Police said that for 15 of the last 16 or so years park police generally got the calls about lost hikers. Lately, he said, it seems many calls have been routed instead to volunteer firefighters. “I don’t know why they’re calling the fire department,” he said. “It doesn’t make sense.” Cappuccilli also said that in cases of injured hikers, park rangers stationed at Bear Mountain can respond, “bringing people out” and down a mountain. “They have all the equipment to do that.”

Anthony Sutton, Putnam County Bureau of Emergency Services commissioner, reported that recent statistics indicate 11 of 13 calls were assigned to the park police. He said his figures reflect lost-hiker incidents, not medical emergencies. Overall, he recommended “a reasonable response, that’s appropriate to the situation.”

“We’ll never do the wrong thing if we look at this from the perspective of the person who needs help,” Sutton said. “But it doesn’t mean we have to meet the expectations, or unreasonable expectations, of a person who suddenly finds himself lost or twists an ankle or didn’t realize it was going to get as cold and dark as it did.”

Phil Dinan, assistant chief of the Beacon Volunteer Ambulance company, suggested that “stupidity plays a big part in it,” such as an unwise decision by someone to tackle Mount Beacon when physically unable.

The state is taking over Mount Beacon from the environmental group Scenic Hudson, and Cooper said that incidents on Mount Beacon generally differ from those on Breakneck. “Our issue on Mount Beacon is more jeeps and ATVs,” she said.

Beacon City Administrator Anthony Ruggiero added that “we have issues of abandoned cars” up there as well, and Cappuccilli mentioned people sleeping on Mount Beacon overnight. 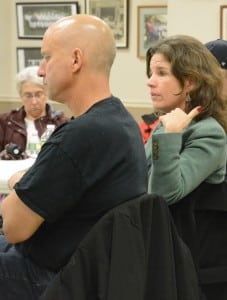 Philipstown Town Board Member John Van Tassel, a member of the North Highlands Fire Department, wondered why the park police don’t staff Breakneck and similar areas full-time on busy days. “This seems to be a real hot spot and it’s getting hotter,” he said.

Cooper responded that with budget constraints, “that’s not a great utilization” of staff. However, “we are shifting some resources here” from elsewhere, she said.

Town Board Member Nancy Montgomery proposed tapping state Office of Emergency Management money, along with state park coffers. “The critical issue is the resources we don’t have” locally, she said. “We’re talking about public safety.”