Laura Hammond to fill vacancy until May 2016

The four existing trustees of the Haldane District School Board voted unanimously last Tuesday evening, Dec. 15, to select Laura Hammond to fill a vacancy on the five-member board. Peter Henderson’s resignation created the vacancy.

Hammond, the president of a local family business, Scanga Woodworking, will serve the remainder of Henderson’s term, which ends in May 2016. She will have to participate in a public election in May if she seeks to continue in the role. 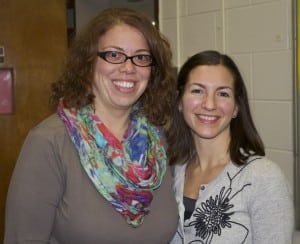 Jen Daly, school board president, said the board considered “four fantastic candidates” before deciding on Hammond. All the candidates were interviewed in a public session the week previous to the meeting. “Thankfully we had an easy time because we had a unanimous vote on the first try.

“We are fortunate to have Laura join us. She is a long-time community member. She is a Haldane grad; her husband is a Haldane grad. They have Haldane in their blood,” said Daly. She described Hammond as having financial and negotiation skills from her professional experience as well as volunteer involvement in school activities, which includes having children in the Haldane middle school.

The board heard a report from district Director of Facilities Michael Twardy, on a three-year energy-saving project that has included the installation of new heating boilers and various upgrades of control technologies to increase efficiency. He said the results so far have resulted in significant savings as measured by usage of fuel and electricity. This project is in addition to the previously reported solar energy project.

District Superintendent Diana Bowers reported that as a result of recent federal legislation, which pulled back from the controversial Common Core requirements, many changes were likely in the way districts approached instruction and evaluation. She indicated the district would have more say over approaches to teaching.

She also noted the New York State Education Department Board of Regents had recently postponed the use of student test scores as a factor in teacher evaluations until at least 2020.

Bowers underscored the continuing issue of state education funding and the difficulty in restoring levels of aid to pre-financial-crisis levels. The review process for the district’s budget will begin early in the new year.