Beacon Sloop Club works to bring the Woody Guthrie back

Anyone who has spent enough time at the Beacon waterfront for the past two years has heard the same sad question being asked over the sounds of the gulls and the tide: Where’s the Woody?

The wooden sloop Woody Guthrie, built 37 years ago for the late Pete Seeger and the Beacon Sloop Club, and lovingly maintained and sailed by the club since, had been a fixture for decades, offering sails to the public every summer. The rides may have been free but, as the Beacon Sloop Club’s Steve Schwartz explained, they came at a cost to the boat itself. 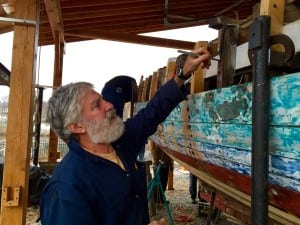 Steve Schwartz, one of the captains of the Woody Guthrie, inspecting the fastenings. (Photo by B. Cronin)

Schwartz has served as one of the boat’s captains during its entire lifespan and has seen the wear and tear up close. For starters, Beacon lies near the edge of the salt front, the constantly shifting line in the Hudson River where the salt water from the Atlantic Ocean meets the fresh water coming down from Lake Tear of the Clouds in the Adirondacks. “Fresh water is nasty to wood, and salt water is nasty to galvanized fastenings,” Schwartz said. “The combination of the two doesn’t do the boat any favors.”

There’s also what happens when a boat is maintained over a long period of time by a group of people — namely Pete, his late wife Toshi, and the rest of the Sloop Club — who attempt to make up for their lack of shipwright experience with enthusiasm and pluck. 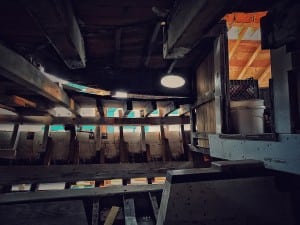 Inside the hull of the Woody Guthrie. Photo by B. Cronin.

“None of us started out as yachting experts or had extensive experience in maintaining wooden boats,” admitted Schwartz. “Even Pete and Toshi, who had the boat built on their own dime, had to learn along the way with the rest of us.”

Two years ago, after having the boat surveyed by inspectors and shipwrights, the club made the decision to pull the Woody out of the water. Estimates for the extensive repair work, including rebuilding the hull, replacing the frames and swapping out the rusty galvanized fastenings for brass ones, topped $400,000. The club’s annual budget is around $30,000. To further complicate the matter, the club calculated that it would cost $100,000 less to build an entirely new wooden boat from scratch. 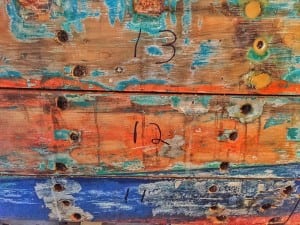 Close up of the hull of the Woody Guthrie. (Photo by B. Cronin)

While the Woody sat at White’s Marina in New Hamburg, Schwartz said club members agonized. Schwartz admits to being at the center of more than one passionate discussion. “I’m from Brooklyn, so I’ve got a big mouth and an aggressive streak,” he said with a grin. Some Sloop Club members pointed out that the decision to drop $400,000 on a boat did not sit well with their image of Seeger, the renowned activist and icon who founded the club.

“People would stand up and just scream ‘Are you nuts?’” recalls Schwartz. “‘You think Pete would want you to spend $400,000 for a boat? Do you know how many hungry people we could feed for $400,000?’ And those are great questions! You can’t just dismiss them by waving your hand and saying ‘Well, Pete liked boats.’” 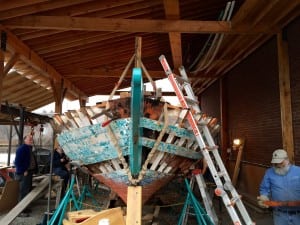 The bow of the Woody Guthrie, under repairs. (Photo by B. Cronin)

In the end the soul of the boat won out, and the Woody was hauled to the Kingston Maritime Museum to begin repairs. While Pete may not have liked the idea of spending $400,000 to repair a boat, he would have liked even less the idea of handing someone else $300,000 to build a boat and simply drop it off when they were done. Because the boat itself was never the point.

As Schwartz explained, Pete used to call the Woody Guthrie “the cheese in the trap.” Part of its appeal was to get people out on the Hudson River so that they could fall in love with it and care about its future. “You do that for 40,000 people throughout the years, you’re going to inspire at least a few of them to become environmentalists,” said Schwartz.

But Pete had already done that 10 years earlier when he created the Clearwater, the sloop that serves as a floating classroom and is currently sitting a few hundred feet away from the Woody at the Maritime Museum as it undergoes its own restoration work. With the Woody Guthrie, Pete wanted to create a smaller vessel that could be sustained and maintained by a single community — the people of Beacon. By learning how to maintain a boat, he hoped residents would learn how to face any other challenge the city faced. Even the decision to pull the boat out of the water every winter was done with the health of the community in mind. 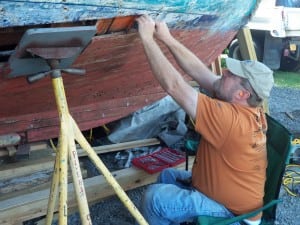 “People always told us that the worst thing we could do was to take the boat out of the water every year,” said Schwartz. “It dries out, the planks move, the fastenings change. But then we’d work on the boat over the winter alongside people who were eager to work on Pete’s boat, with Pete, hear him sing, and eat Toshi’s wonderful food. It was a trade-off. Not so good for the hull to get out of the water, but good for the rest of the boat as well as for the community to come together and get their hands on the boat.” (Besides, the one year the club left the boat in the water over the winter, it sank.)

Repair work began at the end of August by a rotating volunteer crew of about 40 people, not to mention another 20 or so who are busily raising the $400,000. About half has been donated so far, and the volunteers plan on working throughout the winter to reduce the amount of work that the professional shipwrights will have to do over the summer – and be paid for.

Fortunately, those same shipwrights are only a few hundred feet away, working on the Clearwater. Their proximity, and eagerness to help, has allowed them train the volunteers in how to do some of the more difficult work and to swing by at the end of each today inspect the work. The volunteers have already been able to replace the boat’s upper frames. 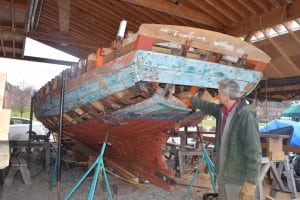 Jim Kricker, director of the Riverport Wooden Boat School, explains repairs being made to the Woody Guthrie (Photo by Michael Turton)

“We’ve reached a point where we’re doing work that we never thought we’d be able to be doing,” says Beacon Sloop Club President James Malchow. “We still need more money, but the amount of progress we’ve been able to achieve already has been amazing.” Malchow said that the plan is to get the Woody back in the water by the fall of 2016.

“Now that we’ve made this dumb ass, crazy, totally impractical decision, it’s up to us to make sure this succeeds,” added Schwartz. “And of course that was always Pete’s plan. Get people together, get them to learn how to work together, and based on that they can do amazing things.”

The decision to restore the boat instead of building a new one was a difficult and costly one, but in the end it boiled down to one thing, he said. “In a very short period of time, we lost Toshi, Pete and the Woody. The difference is, the Woody is something that we can bring back to life.”

For updates on the restoration, visit wheresthewoody.org.