The Clearwater, the graceful reminder of Pete Seeger’s love of the Hudson River, is wintering in Kingston, where it is undergoing some well-earned repairs.

The 106-foot gaff sloop, launched in 1969, has been sailing the Hudson River ever since as part of its mission to preserve and protect the river. Owned and operated by the Beacon-based nonprofit Hudson River Sloop Clearwater Inc., the boat hosts innovative education programs and is symbolic of conservation efforts on the river. Listed on the National Register of Historic Places since 2004, it is the centerpiece of the Clearwater Festival, a celebration of music and the environment held each June at Croton-on-Hudson.

The extensive repairs to the Clearwater are being completed at the Riverport Wooden Boat School (RWBS), a project of the Hudson River Maritime Museum, located at the mouth of Rondout Creek on Kingston’s waterfront.

“It needs a lot of work”

Jim Kricker is the lead shipwright overseeing the Clearwater project. He also serves as director of the fledgling boat school. Kricker had his own carpentry business for years and began building wooden boats in the 1970s. He is also experienced in repairing other old wooden structures such as historic mills, water wheels and barns. 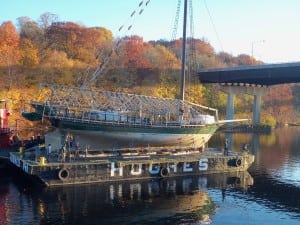 The Clearwater was hoisted onto a barge in Albany, then taken to Kingston for repairs. (Photo provided)

The Clearwater is a centerboard boat with a keel that retracts into a waterproof trunk. That trunk and the keelson are also being rebuilt. The keelson runs along the top of the keel and is fastened to it, strengthening the ship’s frame. “With a boat like this, almost every piece is part of the structure,” Kricker said. “There’s very little that is just for decoration.” The Clearwater was built at the Gamage Shipyard in South Bristol, Maine, known for producing rugged fishing boats that can withstand harsh conditions.

Plying the waters of the Hudson River, with brackish water constantly battering the Clearwater’s hull, is what Kricker describes as a “dynamic situation,” one that requires continual maintenance. And because Clearwater is licensed to carry passengers, “the U.S. Coast Guard has a lot to say about its condition,” he said. USCG inspects the repairs regularly.

Back on the river by May

Before work on the Clearwater began in November, it sailed to an Albany shipyard where it was hoisted onto a barge and transported downriver to Kingston. The boat remains secured to the barge during the repairs, enclosed in what amounts to a huge plastic tent. Work is expected to be complete by May. “Clearwater has a schedule to keep,” Kricker said.

Repairing large wooden boats is expensive. Hudson River Sloop Clearwater Inc. will spend approximately $700,000 to refurbish the sloop. Annika Savio, one of the Clearwater’s two captains, said the organization had received a grant of $425,000 from New York State Office of Parks, Recreation and Historic Preservation (OPRHP). Fundraising to match the grant is ongoing, she said; to donate, visit clearwater.org and select the “Float the Boat” campaign.

Keeping the Clearwater river-worthy has also required a considerable amount of sweat equity. Besides Kricker, the crew working on the boat includes three or four other shipwrights, the two captains, as many as eight crew members and several volunteers. “This project is unique because people are so committed to the Clearwater’s mission,” Kricker said. “There’s a level of enthusiasm you may not find on normal construction projects.”

The Clearwater organization announced on Dec. 16 that is has received an additional matching grant of $343,776 from OPRHP to restore the rigging and topsides above the sloop’s water line. That work will be undertaken during the winter of 2016-17.

A new kind of school

Work on the Clearwater and repairs to the Woody Guthrie — another sloop familiar to Hudson River watchers — are the first two projects of the Riverport Wooden Boat School. The Onrust, a replica of a 17th century Dutch boat, is also stored at the school for the winter and will undergo minor maintenance. The school itself is rapidly taking shape on the site of a former lumberyard adjacent to the museum. 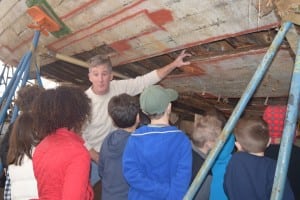 Brian Reid, a teacher at the Poughkeepsie Day School, describes the Clearwater’s repairs to his second-grade class. (Photo by M. Turton)

Jack Weeks, a retired physician and a member of the Hudson River Maritime Museum (HRMM) board, is supervising the construction and opening of the boat school. Weeks told The Paper that the idea of creating the school was first discussed only 12 to 18 months ago. Like all small museums, he said, operating the HRMM poses numerous challenges, and the museum board debated whether the scope of the facility should be reduced or expanded.

“We decided to go bigger,” he said, which turned out to be the creation of a school with three distinct components: the commercial arm for repairing wooden boats such as the Clearwater, youth programs and adult education.

“I think there’s a market out there,” Kricker said of the commercial part of the enterprise. “We’ll try to get as much wooden boat work from the Hudson Valley as we can.” The school will take on other wood-related projects such as timber framing, mill components and water wheels. “I hope this work will provide two things for the school – income and educational opportunities.”

Youth programs will begin in February, a pilot effort in cooperation with the Ulster County Board of Cooperative Educational Services (BOCES) involving six area high school students. Ultimately the youth program will be yearlong, with each class building a New York 27-foot pilot gig. Students will race the boats they build, competing against those from similar programs, including the Lake Champlain Maritime Museum, Cold Spring’s Building Bridges Building Boats and Rock the Boat, a Bronx-based program.

In addition to teaching the skills needed to build a boat, Weeks said the goal of the youth program is to get the participants “away from computers and iPhones, to learn to work together, to experience team building … to help them develop a sense of purpose.”

Four adult education classes will begin in March and Weeks hopes that initially there will be 10 to 20 participants in each of the evening classes. Subjects will include such topics as marine carving, advanced piloting and navigation skills, boat safety and servicing diesel engines. He wants to see future classes build “one design” boats such as a Lightning, Snipe or Optimist Dinghy. Anything related to maritime science is possible, he said. “Classes will evolve into whatever the public wants” and could include such subjects as blacksmithing and marine water coloring for artists.

Weeks has a $1.3 million budget to get the school up and running, including the building purchase, construction and outfitting of classrooms, kitchen, meeting and event space and other facilities. The funding has come mainly from private donors. “We received a large bequest from one individual who really supports what we’re doing here,” he said. Other contributors include Scenic Hudson, the New York State Office of Parks, Recreation and Historic Preservation, BOCES, the Hudson River Foundation and National Maritime Heritage.

Like the repairs to the Clearwater, the boat school is attracting a lot of community involvement. “I have so many volunteers who want to help,” Weeks said, “The value of [their] time is irreplaceable and it’s saving us a huge amount of money.” The tools and cabinets needed to outfit the school’s workshop have all been donated.

“There is nothing like this on the Hudson River,” Weeks said. For now it’s a mid-Hudson project, but “we want to expand that. Eventually we would like to see people come here [from outside the region], take a week of adult education classes,” and stay at local bed-and-breakfasts, which would help boost the local economy.

Weeks doesn’t spend much time wondering what his day will bring. “I’m busier now than when I was practicing medicine!” he said.

More information, including how to support the boat school, can be found at riverportwoodenboatschool.org.