Another re-invention for the familiar spot on Main

By Josie Fleming’s count there have been at least eight incarnations of what is now called, simply, Nelsonville Deli and Café. Fleming, who is back at work there again, named some of the owners and operators through the years, some of whom she could recall on a first-name basis only: “Let’s see, there were Ray and Toni Vilardi, then Eric, then Kim Hatzman, then Ray and Toni again, then of course Charlie and Judy Colamarino, then it was Pali’s, and then the other two.”

Now there are two more: Juan Tacuri and Mariana Jimbo, who have assumed the reins of the spot on the south side of Main in what can only be called the heart of Nelsonville. After taking the place over in July, they’ve spent a few months doing extensive renovations, and opened up just a few weeks ago in what is now a far more expansive looking space. In addition to the usual breakfast and lunch fare, they are offering pastas (one is penne with ground sausage and broccoli rabe in garlic and oil) and daily specials (grilled scallops were offered recently) which are available for lunch and dinner, dining in or for take-out. 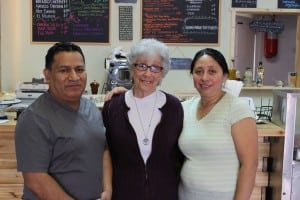 Both Tacuri and Jimbo are originally from Cuenca, Ecuador. Tacuri came to the U.S. in 1987 and learned to cook after arriving. His background in food and restaurant work includes stints doing prep work in Manhattan and Millbrook, and he worked at the much-missed Dockside until its closing. A job brought him to this area, and work has kept him here — in addition to his new business, he continues to work at Cathryn’s Tuscan Grill in Cold Spring. He has helped to renovate his new space, upgrading the electric system, putting in new floors, and adding the tables which now are perched by the windows. More are coming, and he hopes to add outdoor tables in the spring, as well.

Unlike the abbreviated hours of some of its more recent predecessors, Nelsonville Deli and Café will be open six days a week — weekdays from 7 a.m. to 8 p.m. and Saturday from 8 a.m. to 8 p.m. Breakfast choices include “build an omelet or wrap,” corn beef hash and homemade pancakes, along with assorted muffins, bagels and croissants as well as oatmeal. 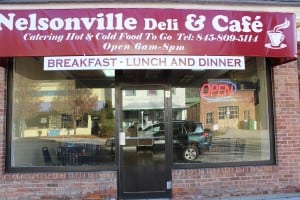 The Nelsonville Delil & Cafe (Photo by A. Rooney)

Lunch offerings include specialty sandwiches — Jimbo says the “Hot Cubano” is very popular — and a range of salads, including an arugula with pecorino, currants and sunflower seeds. There are also grilled burgers and a grilled veggie sandwich with eggplant, zucchini, roasted red pepper, Portobellos and Balsamic vinegar. A wider variety of pastas is in the works for January and beyond. Each day there is a new ravioli special and soup — chicken with white beans was in the pot recently. A range of coffees and teas is offered, and, alert to those who require it: espresso has come back to Nelsonville. 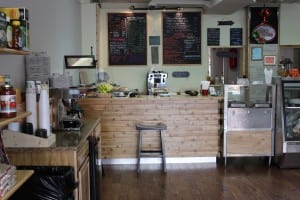 The newly renovated interior of Nelsonville Deli and Cafe (Photo by A. Rooney)

Tacuri and Jimbo are eager to meet the community. “Everyone’s welcome,” they say, almost in unison. As for Fleming, being behind the counter again is pretty much her natural habitat, and customers are definitely greeted with good cheer.

2 thoughts on “There’s a Deli In Nelsonville Again, and Now It’s Also a Café”