From washed-out Philipstown roads to deteriorated Cold Spring dams and Nelsonville’s lack of sewers, multiple hazards threaten the public well-being, according to a report that explains the risks and offers strategies to minimize them.

The 2015 Putnam County Hazard Mitigation Plan fills two thick loose-leaf volumes, detailing problems county-wide as well as in each municipality. The section or chapter on Philipstown fills 46 pages; that on Nelsonville, 24 pages, and the one on Cold Spring, 19 pages. 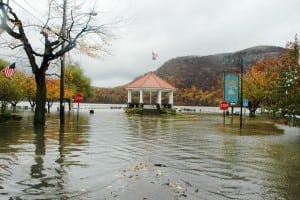 The Cold Spring bandstand during flooding caused by Hurricane Sandy in 2012 (file photo by L.S. Armstrong)

Under a federal law enacted in 2000, lower-level governments must adopt such a plan and update it every five years to be eligible for national disaster-relief funds and pre-disaster planning aid. The Putnam County Legislature approved the mitigation plan on July 7 and Philipstown’s Town Board endorsed it two days later. Cold Spring’s Village Board adopted the plan Dec. 15 and the Nelsonville Village Board has scheduled a vote for Monday, Dec. 21.

Kevin Donohue, Philipstown’s code enforcement officer and the town’s National Flood Insurance Program floodplain administrator, was instrumental in preparing the Philipstown component of the plan. He noted that the town began writing it a few years ago, before Putnam County organized a county-wide approach. The town’s draft became part of the eventual county document. Donohue said the town would revisit its portion of the plan frequently. “It’s a dynamic document,” he said. “It will constantly be updated … changing always, but for the better.” He pointed out that the plan focuses on mitigating natural disasters, not terrorism.

Each municipal chapter of the county plan lists threats and priorities for that municipality. Not surprisingly, severe storms (including hurricanes and intense winter weather such as heavy snows, blizzards and freezing ice) show up as a high hazard for all of Philipstown, the villages included.

More surpising, the chapters on Cold Spring, Nelsonville and Philipstown all mention landslides as a potential hazard. According to the county, landslides pose threats in parts of Putnam because the land contains significant karst from carbonate rocks, which increases the likelihood of sinkholes, land subsidence and related problems. According to the county 18,391 people live within a “high-incidence-of-landslide area” (about 20 percent of the county population’s of 99,710). 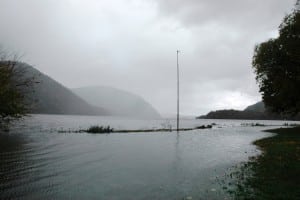 Because steep slopes exacerbate flooding, the county document also observes that Putnam County’s highest elevations are in Philipstown and that Philipstown, Putnam Valley and western Kent “have the most rugged terrain, with many high peaks having elevations of over 1,000 feet.”

The Philipstown section lists 19 projects that need tackling, or at least they did when the plan was compiled. Of those, 16 are deemed “high” priorities. However, work has already been completed on at least two: improvements to the southernmost stretch of Old Albany Post Road at Sprout Brook Road (a project whose paving element sparked debate) and installation of a back-up generator for the town communications tower off Lane Gate Road. A third priority, upgrading the town Recreation Center to serve as a public shelter in emergencies, took a big step toward realization in November with the arrival of a Red Cross trailer with bedding and other essentials.

Other Philipstown high priorities involve stream and dirt-road projects. These include:

The threats in Cold Spring include a loss of power at the West Street and Market Street wastewater pump stations. The village has been pursuing pump station improvements already. Prepared with village assistance, the Cold Spring section of the plan also terms municipal dams “a real concern” and high priority.

“The village owns three dams which currently have some deficiencies,” the plan states, although a fourth, Jaycox Pond, is “not a concern.” (The village has taken preliminary steps toward dam repairs.) The plan continues that, should there be a dam failure, the areas at Fishkill Road and Foundry Pond Road would suffer the worst damage. The dams and related reservoirs are part of the Cold Spring water system, which supplies Cold Spring and Nelsonville.

The plan also mentions the Hudson River flooding that occurred in the lower village in Hurricanes Irene and Sandy and lists as a high priority several steps to minimize future problems. These include installation of “an electrical design disconnect to de-energize this area prior to inundation, work[ing] with property owners to elevate utilities, which are often in basements,” and relocation of basement oil tanks.

Two “medium” priorities are “undergrounding utilities” (i.e., burying power lines) and storm-water and flood management along Back Brook, which remains prone to flooding.

The Nelsonville section of the plan lists nine initiatives, with most ranked medium or low priority. One high priority involves a public information campaign for residents of flood-prone areas; another is monitoring of the updated catch-basin and pipe system on Healy Road. 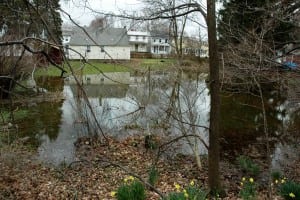 Backyard flooding near Main Street in Nelsonville in 2007 (file photo by L.S. Armstrong)

A third is more comprehensive, an effort to “complete engineering and secure funding to connect the village residents to the existing sewer system currently serving the Village of Cold Spring.” The Cold Spring system was designed, the plan notes, to handle the needs of Nelsonville. But no such hook-up occurred and Nelsonville homes and shops, often near one another, typically use septic systems or other waste-disposal mechanisms. That, plan notes, makes them “vulnerable to power outages and flooding for properties in low-lying areas.”

The Nelsonville section further notes that the village lies above the Hudson “and the contouring of the land creates what can be described as a bowl. The runoff from the surrounding hills collects in a large area of the village and has caused flooding and sewerage issues in the past.”