The Vault is latest restaurant to occupy former bank

It’s a name game at the prominent space at 446 Main St. in Beacon which, for years, housed the Piggy Bank restaurant — that name reflecting the property’s original and long-standing use as a bank.

Piggy Bank changed over in name and cuisine, first to Dim Sum Go Go and then Dim Sum Vault. Now, in what its owners hope is a final iteration, the newly reopened dining establishment is called, simply, The Vault, and the focus is on “American tapas,” which translates into many — though not exclusively — small-plate options. In fact, the present owners considered, but decided against, leasing the space years ago, and have returned now to a Beacon with a more vigorous dining economy. 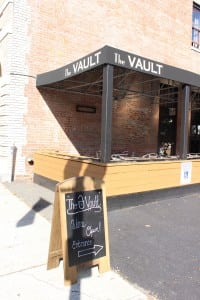 The Vault, on Main Street in Beacon (photo by A. Rooney)

The large room is filled with tables for two and four and also contains a communal table, near the raw bar and beverage bar, for convivial gatherings. Tuesday through Thursday early evenings there are happy hours, with both drink and food specials, Thursday being “Martini and Meatballs” night at the bar. A full range of specialty cocktails and wines served by the glass and bottle are offered.

John Lombardi, who manages The Vault on behalf of owner Tony DiSarro, knows the territory well — he’s been living in Beacon for more than 20 years. A 1994 graduate of the Culinary Institute of America, he has been in the food industry for 30 years, beginning with helping out at his family’s place, Lincoln Lounge, in Mount Vernon. “I started off there at age 12 and worked until I was 16,” he says. “Then I shifted to another restaurant, doing front of house, back of house, everything.” Lombardi previously owned and ran Lombardi’s, in Cold Spring, where Angelina’s is located now. He’s putting his experience to use. “I’m here to make this place work, service-wise, presentation-wise and food-wise,” he says, adding that it’s “awesome to be back in Beacon.”

Lombardi describes the food offerings at The Vault as different not just in national cuisine from tapas but in portion size as well. “Our servings are bigger than normal tapas, which usually gives you morsels,” he says. Recommending three or four dishes to share between two diners to start, he says this type of order can be augmented with a visit to the raw bar, or perhaps with an order of cheese and charcuterie, or even one of the “large plate” selections. 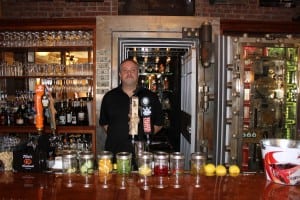 The Vault’s manager, John Lombardi, in front of its namesake, the old bank vault (photo by A. Rooney)

Lombardi praises his head chef, Amerci Rodriguez, and pastry chef, Suzanne Quillen, who work with ingredients largely brought in from local farms and very local purveyors like Barb’s Butchery for some meats, Beacon Pantry for the cheese and charcuterie, and Beacon Bread Company. Pine Plains’ Meiller Farms supplies the pork products. Quillen’s specialty is pies, including individual ones. 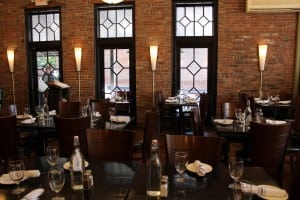 The new decor inside The Vault, which opened in September (photo by A. Rooney)

Reiterating the bank/vault theme, the menu is divided into sections which are appropriately named, beginning with “Exchange Plates,” offering small servings of seasonal soups, along with items like roast corn and Parmesan fritters in a honey chipotle emulsion; pan-roasted wild mushrooms with baby spinach, caramelized shallots and mascarpone; and crispy pork belly in an apple bourbon glaze with frizzled shallots. Prices for these small plates range from $6 to $10. 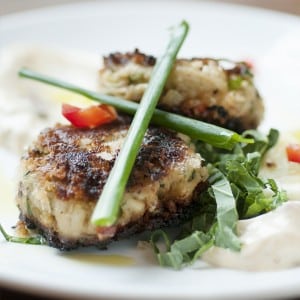 The “Trusts” category contains an artisanal cheese plate, served with quince jam, along with the charcuterie plate, while “Raw Interests” indicates the seafood bar, stocked with oysters, littleneck clams and shrimp with a chili mango relish. Finally, the “Deposits” offer up larger plates, including a local veggie plate, dubbed vegan-friendly, for $15, along with a seared Arctic Char with quinoa, corn succotash and a creamy fennel puree for $25.