Where the “cold” days are 90 degrees

At the beginning of December, I joined 58 other Americans sworn in as Peace Corps volunteers in Senegal, on the west coast of Africa. It has been a short month with many long days, filled with a new language, strange customs and the excitement of never knowing what to expect. It’s certainly not Garrison, where I grew up.

Each day so far has been slightly different, with the same pattern: wake up, breakfast, greet the compound, water, xa jara-jara, lunch, study, thresh rice, water again, read/journal, dinner, tea, read, sleep, and repeat. The routine sounds familiar, but being in Senegal, little of it actually is. 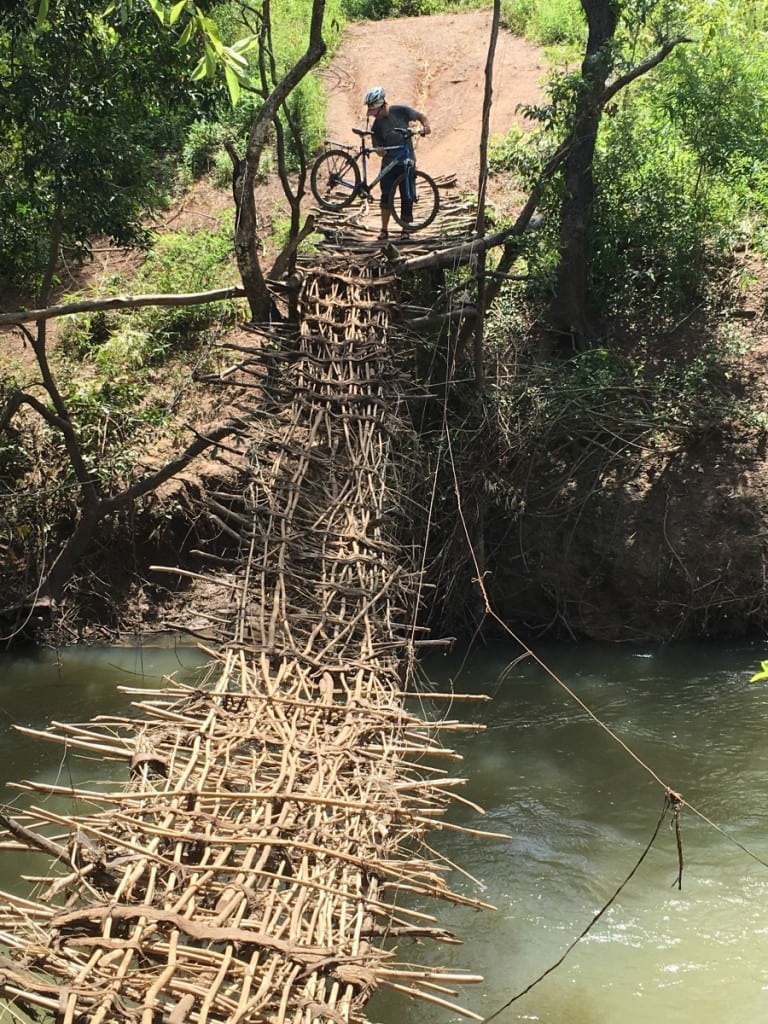 Roosters crow before the morning call to pray. They wake the donkeys, and pretty soon the whole village is moving. In this mud-hut village nearly everyone is moving before I am.

Around 7 a.m. women start to mill corn in their mortars and pestles, and it sounds like a high-energy baseline. I crawl out from under the mosquito net, pour water from a plastic bidon, and heat the pot on a single-burner, propane stove. I make gruel with fonio (a native grain), protein powder, hemp seeds, peanut butter, coconut shavings and whatever other nutrients I can pack into the bowl. Or I fry two eggs for fuel throughout my day. Then I duck under my back door, look over my garden and out toward the fallow rice and peanut fields of Dar Salaam.

Dar Salaam is an agricultural village down a bush path from an often-impassible dirt road to Kedougou. We are a kilometer from the Gambia river, and the ridge on the other side is the start of the Guinean Plateau. This is considered the mountainous and rainy part of Senegal, though no hill reaches as high as Sugarloaf or Anthony’s Nose, and no precipitation will fall between now and late May. Therefore, I must water.

With watering can in hand, I head to the well in the center of my compound. The women and girls still drum the giant wooden mortars with pestles. I greet them. Kor-tananté. Tanawanté. “Did you pass the night without evil?” “Without evil.” We speak Jaxanke, a language used by only about 30,000 people in the world.

The residents of Dar Salaam are known for their piety, although I’ve heard that other communities joke that they care only about three things: money, meat, and women. I have seen little money and no meat in my compound, though my homestay father does have three wives. He is an imam and marabou. A marabou is someone who teaches young boys Arabic and the Qu’ran in exchange for their labor on his fields. The boys are called talibé, or student in Arabic, and we have about 20 living on our compound. I greet them, pull water, pour it into my watering can, and soak my garden. They head to the fields. 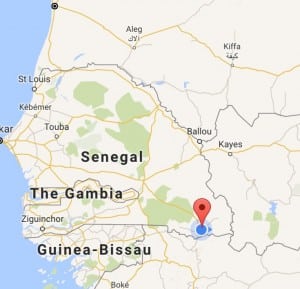 Dar Salaam is located in southern Senegal, near the border with Guinea (Google Maps)

I am a Sustainable Agriculture Volunteer, here to teach farmers techniques that will reduce costs, increase yields, and improve soil health. Much of what I will teach is basic — how to compost, mulch and intercrop. I don’t yet have the language skills to explain what and why I am doing something, so for now, I garden to demonstrate the benefits of what I will teach.

After I water, I head out to the communal gardening space and xa jara-jara. Xa jara-jara translates as “walk around and socialize.” So, I go to the sole hand-pump well in the village and pump for the women watering their gardens of mint, lettuce, and onions. A lady slides a bucket under the spout, I pump, we chat, then I help her get the bucket onto her head. She walks away and throws water over her garden beds with a bowl made from a dried gourd. Up steps the next one, and in slides another bucket.

At 11 a.m., it gets too hot to water or stand in the sun. I walk around to greet my friends, who I have not seen, xa jara-jara, then return to my hut and wait for lunch. 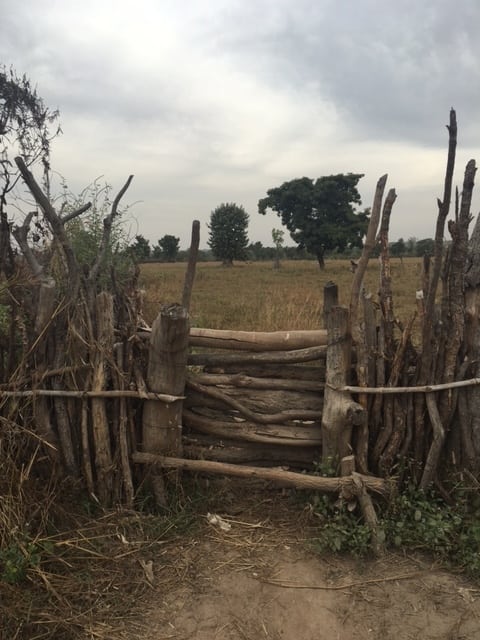 A handmade fence in Senegal (photo by William Benjamin)

Every meal in Dar Salaam has been white rice or corn meal with a watery leaf or peanut sauce — nothing nutritious. During training, Peace Corps staff warned people heading to Kedougou would likely become malnourished if they do not supplement their diets, hence my breakfast. The men and older talibé sit at one bowl, the women and children at another. My homestay father fans the steaming bowl, then pours the sauce. We all reach with our right hands and start eating. It is too hot, but everyone here has an incredible tolerance to heat. If I don’t burn my fingers, I won’t eat.

After one eats his fill, he stands up, licks his hand clean, and walks away. The hungriest uses his pinky and outer palm to squidgy the bowl clean, then licks his hand like a cat.

After lunch I am exhausted. Although it may not seem like work, getting water from a well is tiring. It is even harder to walk around town and attempt to communicate in a language that you barely know. I point at objects, ask what they are, then write them in a notebook that I keep in my back pocket. I don’t mind being the entertainment with my mispronunciations and grammatical errors, but in the afternoon, I need a break. I rest during the heat of the day, when there is nothing else to do. 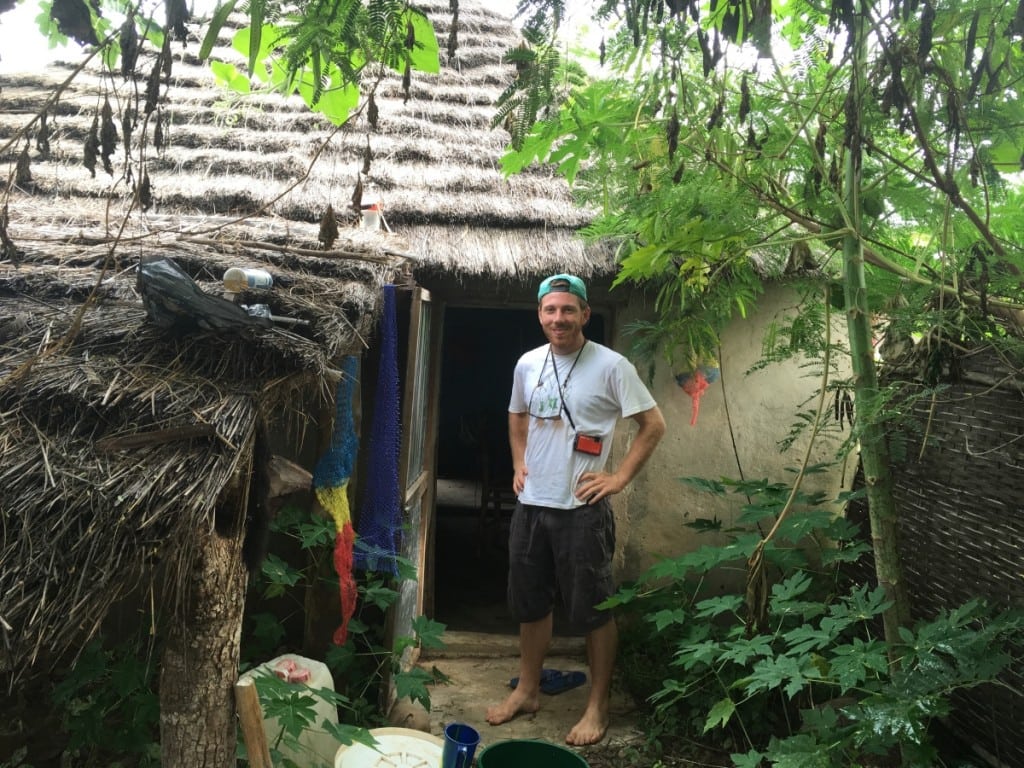 As the sun begins to cool, I head down into the fields to help with the rice harvest. The men take meter-long bamboo sticks in each hand and bat small bales of rice, removing the grain from the stalk. It’s a full-body exercise, and exhausting. I last a few bales, and start to pray for the evening call to prayer, which means the men will head to the mosque.

Senegal is 90 percent Muslim, and in my community, every man will head to the mosque. When they go to pray, I go to my garden and water again. I save the last bucket for my shower at dusk. This is the “cold” season (although it still reaches 90 degrees during the heat of the day), so I only take one shower. Since there is no running water in my community, a shower is taken with a bucket, a cup and an onion sack, which works as a loofa.

I dress, then head into the middle of the compound to read or write in my journal under a solar lamp. No one in my compound can read, but they love watching me scribble. Some nights I write their names on a piece of paper and let them try to copy the letters. The girls are the most interested and keep asking me for pencils and notebooks. I write or read until the oldest son comes to me and says, “come eat, meat”— the one phrase the last volunteer taught him in English. There is no meat. More of the same.

After dinner, I go to visit other compounds, as I know they will offer me more food and tea. I shake hands, and the men feel them for callouses, while they ask, “How is work?” We sit around a fire to warm—them in jackets or sweaters, me in a T-shirt. The children point at objects and tell me the Jaxanke words for them. I jot them down and try to use them in sentences. They look up at me, smile, then drop their eyes.

I head home, turn off my headlamp and walk under the luminous carpet of stars. Heera doron. All is peace.

Benjamin posts about his experiences in Senegal on his blog, Transitions of a Twenty Something.