The annual announcement of the season’s offerings by the Hudson Valley Shakespeare Festival (HVSF) used to have a predictability about it. In recent years, the “reveal” would come down merely to the specifics. In what has been a “one from column A” kind of way, it was a matter of finding out which drama, which comedy and which small-cast, multi-character broad comedy would fill the bill the following summer.

Last summer, however, saw an alteration, with an increase in productions to four, just two by the Bard, with a third, less classifiable contemporary theater piece (Arabian Nights), and the fourth, a solo adaptation of Homer’s Iliad, performed by Kurt Rhoads.

This new year brings even more “new” to the festival, which marks its 30th season under the tent at Boscobel. A trio of works by Shakespeare — including an all-female production of Macbeth, will be joined, in a nod toward honoring its Hudson Valley community, by a volunteer-driven production of Thornton Wilder’s Our Town populated by a mix of professional actors and designers who will work alongside members of the community.

The production takes its inspiration from the Public Works program developed by Manhattan’s Public Theater, which has sought to “engage the people of New York by making them creators and not just spectators.” Public Works has partnered with diverse organizations, conducting workshops and other activities leading to the creation of participatory theater in the service of “creating theater that is not only for the people, but by and of the people as well.” The year-long process of engagement culminates in a big show at the Delacorte, the Public’s outdoor theater in Central Park. 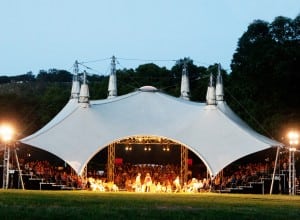 For the first time, community members will find themselves on stage under the tent at Boscobel (Photo by William Marsh)

Davis McCallum, HVSF’s artistic director, along with Associate Artistic Director and Director of Education Sean McNall and the production’s director, John Plummer, intend to create a Hudson Valley version of their own. “We thought about how we could pursue it: who is our community at HVSF, and what would it mean to turn the frame around and put our audience downstage center?” McCallum said.

Part of McCallum’s inspiration was Made in Philipstown’s Labor Day banquet, which he called “the most remarkable event I’ve ever been a part of — so filled with generosity and celebration, and such full participation from everybody. We hope that Our Town can be a kind of theatrical version of that. It’s the great American play, period, full stop. It’s filled with honesty, simplicity, power. As soon as I got this job, I thought about it; having it community-driven will make a lot of sense.”

Although many details are being fine-tuned, what is currently planned is a series of two free workshops in Peekskill, Garrison, Cold Spring, Beacon and Newburgh, in February, March and April. The workshops will serve as a way to gauge people’s interest and see “who wants to do it and build bridges between the festival and among communities,” McCallum said. “Then, depending on the level of interest, a user-friendly audition process, will take place and a company will be formed.” 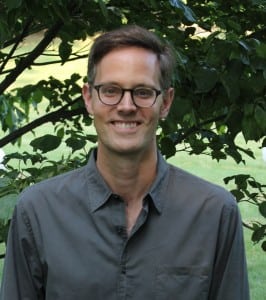 He noted that diversity is a goal, with different ages, backgrounds, walks of life and experience — from those who have appeared in dozens of plays to those who have never been on stage before — mixing together, coming to know each other and, finally, putting on a play together.

After the initial meetings and casting, there will be a short hiatus, while the festival gets to work on its summer productions. Then, in May, rehearsals will begin, probably two evenings a week and one weekend afternoon through June, increasing to three weekday evenings and both weekend days as the performance weekend draws closer. After the festival season winds down, Our Town will have access to the stage under the tent for the final week before showtime on Labor Day weekend, with three or four performances, plus an invitation-only dress rehearsal and possibly performances at other venues.

McNall, who appeared in last season’s A Midsummer Night’s Dream and The Winter’s Tale, will be one of three HVSF actors in the production, playing the Stage Manager. (“I would go anywhere in the country to see him play the Stage Manager,” McCallum said.) The professional actors will mingle with a cast of about 30. Production values will be no different from the festival’s other plays, McCallum said. 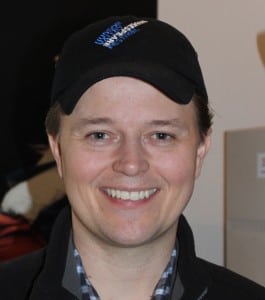 Sean McNall (photo by A. Rooney)

“The point will be we want to produce it with the full support of the theater community, with first-rate costumes, lighting, sound and props,” he explained. “Everyone will be expected to memorize their lines, but part of what will make it beautiful is the authenticity and honesty of what is brought to it. The play itself has a universality. It’s devastating and totally unsentimental. People come together to try to bring as much of themselves as they can to this play.”

Admittedly, this is a grand experiment, and that’s okay by McCallum. “We have many questions on how to budget for it, and we’ll be encountering many things we weren’t expecting, to be sure, but I have a lot of faith in the project,” he said.

Aiding and abetting this project and production will be Emily Knapp, who will act as point person. Knapp is the recipient of a One-on-One grant through the Theatre Communications Group, which paired her with McCallum for 18 months of professional development through a mentorship at a member theater. Knapp, according to McCallum, will “be a familiar face in Philipstown this year.” She, along with McNall and Plummer, will run the community workshops.

In addition to those in the community who wish to try their hand on stage, other production volunteers are welcome. “We’re going to need a lot of help,” McCallum says, “front of house, costume shop, serving food in between the three acts — people should feel free to reach out.” Community members should keep their eye on the festival website at hvshakespeare.org for details. Workshop information will also be featured in The Paper and on Philipstown.info.

Local audiences will surely embrace the ticket prices: completely free, in keeping with how the HVSF envisions the production overall: “It’s a gift that the theater company is giving back to the audience to celebrate 30 years in the Hudson Valley,” noted McCallum.

Besides “the Scottish play,” directed by Obie Award-winner Lee Sunday Evans in her HVSF debut, the festival’s other summer productions will be Measure for Measure, directed by McCallum and As You Like It, directed by Gaye Taylor Upchurch, who directed An Iliad.