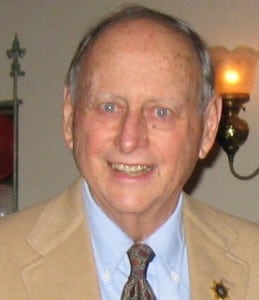 During his youth, Frank was an accomplished tennis player and an excellent student. Frank entered the Navy’s V-12 officer training program at Hobart College in 1943. He had reached the rank of Lieutenant, j.g. at the time he was discharged from active duty in 1946. Upon discharge, he matriculated at Yale University, from which he was graduated in 1948 with a degree in Industrial Engineering. Following Yale, Frank attended Cornell Law School where he received his law degree in 1951.

Frank practiced law in Carmel from 1951 until his retirement in the early 1990s. Frank served as Putnam County Judge presiding over county court, surrogate’s court, and family court matters for the County from 1974 through 1980. In 1981, he returned to private practice. As an attorney, he represented the towns of Carmel and Patterson, and the Village of Brewster, and was for 10 years, the assistant District Attorney for Putnam County. Frank also held the positions of Commissioner of Elections for Putnam County and President of the Putnam County Bar Association. He had been a director and past president of the Putnam Community Hospital, a director of the former Mahopac Hospital, and a member of the Carmel Rotary Club.

A voracious reader, Frank read thousands of books throughout his lifetime. He particularly enjoyed reading biographies of past presidents and statesmen. He was an avid golfer, sailor, and enjoyed traveling.