Update Jan. 12: The listing has been removed.

A listing on the real estate website Zillow for the rental of the Dunkin’ Donuts gas station and convenience store on Chestnut St. in Cold Spring caused a flurry of local chatter — as well as a claim by the property owner that the listing is bogus. 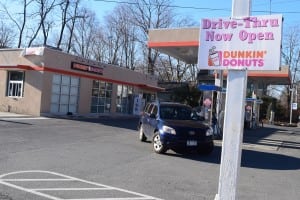 The Dunkin Donuts on Route 9D in Cold Spring (photo by M. Turton)

On Wednesday afternoon, Sunny Sheld, manager of the convenience store and gas station said that nothing at the site is available for rent. Dunkin’ Donuts Manager Heather Morgan said she had spoken to Paul Sardinha, owner of the franchise, and that he knew nothing about the property being available to rent.

The Paper spoke with Nastassia Nedaspasava, Zillow’s contact in the listing on Thursday morning. The Zillow ad includes such terms “studio” and “multi-family” causing some to wonder if the listing claimed that the building includes an apartment. Nedaspasava said that no apartment is involved. She declined to name of the person who placed the listing but emphasized that the Dunkin’ Donuts portion of the building is included in the space being offered for rent. 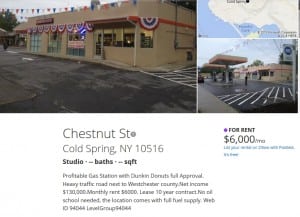 The listing for Dunkin Donuts on Zillow.

Early Thursday afternoon The Paper again spoke with Sheld, showing him the Zillow listing. He reacted immediately saying, “This is BS. This is total BS — I’m calling my boss.” Syed Hussain, a Long Island businessman, told The Paper that the real estate listing is not genuine. He went on to say that he owns 35 gas stations, mostly on Long Island, and that some include Dunkin’ Donut franchises, car washes and convenience stores. Hussain was adamant that no part of his Cold Spring operation is up for rent.

“I spent a lot of money” developing the Cold Spring site he said, adding “I’d be crazy” to rent it so soon. Hussain was equally emphatic that he owns both the building and the land surrounding it.