Parking meters are coming to Cold Spring — well, one parking meter, at least. At its Jan. 5 meeting, the Cold Spring Village Board approved a lease with Parkeon, a firm that specializes in parking management. The three-year, $11,723 lease includes installation of a pay station in the municipal parking lot on Fair Street, a move endorsed by the parking committee chaired by former mayor Anthony Phillips. 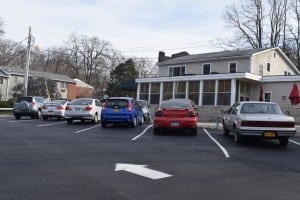 The municipal parking lot on Fair Street will soon collect fees via a solar-powered pay station. (Photo by M. Turton)

The solar-powered station, which is expected to be operational by spring and will be owned by the village after the lease is paid, will accept cash and credit cards. Rates have not yet been determined. Trustee Cathryn Fadde said that visitors who extend their stay will be able to make additional payments with a smart phone.

A number of related issues, including a recommendation by the parking committee that the village again hire an enforcement officer as it has in the past, will be discussed at a board workshop on Tuesday, Jan. 26.

Village water meters are in need of an upgrade, which will carry a significant price tag. The meters measure the amount of water used in residences and businesses in Cold Spring, Nelsonville and a small number of homes outside the villages. Meters are read and billing issued on a quarterly basis.

Superintendent of Water and Sewer Greg Phillips said the existing meters, installed in 1997 and no longer in production, are near the end of their practical life. He said he has been using spare parts to keep them operative for the past few years.

Tom Sprague of Badger Meters described for the Village Board the cellular technology used in the latest generation of meters, which would enable water department staff, residents and businesses to monitor use on a daily basis. Currently leaks and other situations that waste water, sometimes in very large amounts, can go undetected for weeks.

Phillips said that a switch to the cellular meters would also save him and his staff a great deal of time because the new meters would be monitored remotely rather than through visits to each meter. Cold Spring’s water system includes close to 900 meters that would need to be replaced at a cost of $200 each, or about $180,000. Sprague estimated that installation would cost $75 to $100 per meter, or an additional $67,500 to $90,000.  Phillips said he would prepare a report for trustees recommending that action be taken soon in order to include the cost of the meters as part of bond anticipation notes to be used to finance other water-related projects planned for 2016.