After the excesses of the holiday season, Beacon’s Matteawan Gallery shifts gears each January, inviting an artist in to work on a very specific project within the gallery space. The goal of this Winter Residency is to give artists the space to create a new body of work or to continue working on an ongoing project in a new environment. The residency focuses on work that has a “social, performative or participatory component,” according to gallery notes.

In 2014, the first year of the program, artist Angelika Rhinnhofer worked, for one week, in the gallery transcribing interviews previously recorded for a priori, a project about family history and identity, with collected narratives from individuals whose curiosity and attempts to make sense of memories, stories and facts eventually led to the disovery of their ancestry. Last year, interdisciplinary artist Mollie McKinley, in a two-week residency, made a set of “new ritual objects,” using rustic and found objects as tools of ritual transformation in videos and photographs. The residency culminated in the creation of a set/installation in the gallery which embodied and contradicted the romantic solitude of the interior winter cabin. 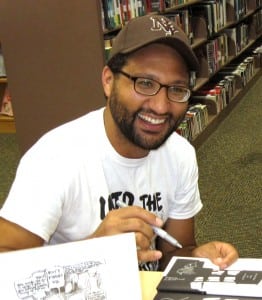 This year, Matteawan has extended the residency to a full month, as it houses Beacon artist Jean-Marc Superville Sovak, who will present I Draw & You Talk, an oral history project that combines portrait drawing with discussions of local issues and current events, thus embodying many of the stated goals of the residency. For the month of January, he will be in the gallery most days of the week, with regular hours on weekends from noon to 5 p.m. There will be a closing reception on Sunday, Jan. 31, with a talk by the artist at 3 p.m.

Superville Sovak’s project begins with a poll question for the day advertised on a sandwich board outside the gallery. People walking by are invited to enter and discuss the topic with the artist and to enjoy a homemade cup of soup while he draws a pencil or ink portrait of them. Passersby who choose not to enter will have the opportunity to vote on the topic with a “yes” or “no” opinion by dropping a pea into the appropriate container affixed to the sandwich board. 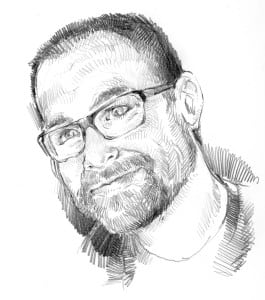 In this project Superville Sovak is especially interested in the opinions of those who may not normally visit an art gallery. The artist hopes to “physically bridge the virtual rift between the long-time residents of Beacon versus weekend visitors and those who have moved here in recent years.”

The drawings of visitors will be displayed in the gallery for the duration of the residency, after which participants can collect their portrait in exchange for taking part in the project. The conversations with Superville Sovak will be recorded, compiled and edited for a podcast to be streamed on a dedicated website. Documentation of the voting results will also be displayed on the website: idrawandyoutalk.wordpress.com.

Mattewan Gallery Director Karlyn Benson approached Superville Sovak and asked him to give the idea of a residency some thought. Superville Sovak, who works in a variety of media, including pen and ink drawing, sculpture and video, was intrigued by the opportunity to “try out something different, not having the usual trappings of programming — using the gallery as an incubator and helping artists create and not just exhibit is a great idea,” he says, noting that he was “given carte blanche; Karlyn was open and trusting. She came to my studio and I [not knowing the concept] had prepared differently, more in the ‘this is the work I’ve done’ mode whereas this was, ‘No — it’s more about work yet to be done.’” 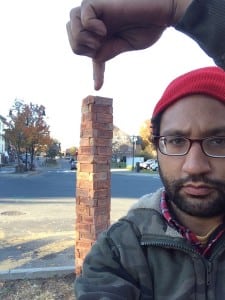 JM Superville Sovak at a Kingston biennial project he was involved with. (photo provided)

Coming up with what to do in the space, Sovak tapped into some unembarked-upon projects which had been lurking in his brain. “I had this idea in my head of doing a podcast. I was a consumer of radio and this podcast was more things that I would like to hear: aspects of artists’ lives: the grind of it all; being a parent and also an artist, things like that. That morphed into what would it be like to get someone into a gallery who otherwise wouldn’t go in? Previously I’d done an on-the-street interview series with men I thought looked like me, sort of video portraits. I began to wonder what would it be like if I drew portraits as part of this residency. Then I combined the portrait drawing and a gallery podcast all into one thing. I love the idea of the gallery becoming a special place — sort of a cross between a barbershop and a soup kitchen, with portrait drawing as the main ‘hook’.

“Then I considered that once people came in and were present, witnesses to what’s going on, well, we might as well talk, too. So the topics will be advertised, and we can stick to the script, or not. But most of it will relate to the local zeitgeist — interesting local issues. The weird thing is even though there is so much conversation generated online in all the Beacon Facebook pages, very little cross-pollination actually happens on Main Street. Gallery-goers go the galleries, Irish pub-goers go there. There’s a buffer of anonymity, yet when interaction does happen, it’s amazing. For instance the parades — well, we probably have too many parades, but hooray! — the concerts by the river, any time you have the opportunity to talk with each other, you should take it.” 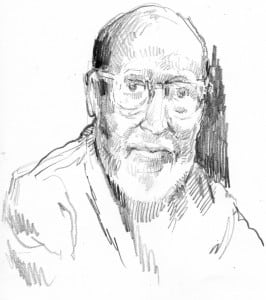 Superville Sovak hopes to be there seven days a week, largely during the after-school hours on weekdays, and far longer on weekends. When not actively drawing, he’ll be working on the website which accompanies the residency, a site which is currently bare bones but will be built up as the residency moves along.

“I have no idea how many people will turn up,” Superville Sovak says. “I’ve had a considerable amount of interest from people I know, but I’m really hoping that many people I don’t know will walk through the door.”

Superville Sovak’s work was most recently included in the Kingston Sculpture Biennial and ArtBridge 2015, and Reclaim, Reboot, Renew, Royal Society of American Art, in Brooklyn. His videos are distributed by Videographe, and have been screened worldwide. He received a BFA from Concordia University in Montreal and an MFA from Bard College.

Matteawan Gallery is located at 436 Main St. in Beacon; the phone number is 845-440-7901. For more information visit the project website, or matteawan.com or the gallery’s Facebook page.