Driving along routes 9D or 9 during the warmer months over the past few years, you may have slowed down, noticing a farm stand. If you stopped, and while making a selection from the array of produce, herbs and flowers available, noticed a sign saying “Renewal Farm” and asked the people manning the stand about it, you would have learned that the farm was not merely a place where vegetables were grown, but a comprehensive transitional vocational and housing program for 24 men recovering from debilitating addictions.

Now, that program, which has been operated by the New York City-based social service nonprofit Project Renewal, in association with St. Christopher’s Inn in Garrison, is under threat of closure due to shifting federal funds as a result of policy changes. Renewal Farm has managed to raise $150,000 through online fundraising to keep the program going through the end of June, when they hope and anticipate that other funding opportunities, including foundation grants and New York State monies, will keep it afloat for the rest of the year and hopefully many more years beyond that. 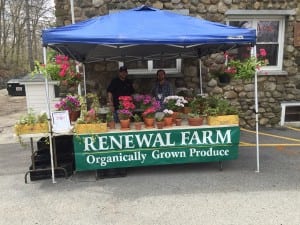 Flowers and vegetables are sold seasonally by residents and staff from Renewal Farm.

These six months are a needed “bridge,” according to Project Renewal Chief Executive Officer Mitchell Netburn, who describes the government as shifting its support now “pretty exclusively toward permanent housing for the longtime homeless. It’s been somewhat of a trend over the last few years. We’re part of eight agencies which lost funding, and while we ourselves have shifted some of our programs to permanent housing, we try not to have a cookie cutter policy, and we feel there is a need for transitional programs as well. Some people don’t have the skills to live independently and are not able to maintain sobriety for a period of time, but eventually can and do. And for many people, getting clean and sober in their own communities is very difficult. With Renewal Farm we can take them away from the temptations and place them far from their former communities, for a period of time. And this program has really worked — the cut in funding has nothing to do with performance.”

Originally launched in 1996 in much larger premises at Camp La Guardia, an 800-bed shelter for New York City’s homeless, located in Orange County, the program ended there when the camp itself was closed down in 2007. With St. Christopher’s own mission as both a Franciscan friary and a substance abuse counseling center dovetailing with the tenets of the Renewal Farm program, a request was made to Garrison and Highlands country clubs to donate two acres for use as farmland, with the men in the program, guided by a farm manager, serving as farmers. 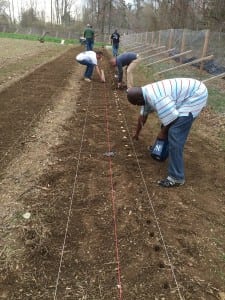 A plot of land offering much more than just vegetables, at Renewal Farm.

The donated land was transitioned into a two-acre agricultural field, with men from the program helping to clear the land and install the infrastructure needed for successful farming of it. By 2008, Renewal Farm was up and running at its new site. Residents of the program benefit from comprehensive treatment and health services provided by St. Christopher’s Inn and, surrounded by the serenity of the Garrison woods, operate the farm which serves as a workshop, educating the men not only about agricultural techniques, but helping them develop good life skills and work habits, things augmented by Renewal Farm staff members, of whom there are seven: the program director, a case manager, farm manager, peer counselor and three drivers/monitors. The produce that the farm yields is donated in part to St. Christopher’s and to the country clubs in exchange for the use of the land. It is also donated to local food pantry organizations, and some is sold at farm stands.

The program has resulted in successful outcomes overall for the men who have participated, according to Project Renewal, with far lower than usual rates of recurrences of testing positive for alcohol and drugs after participation. Residents participate in addiction treatment groups to achieve sobriety and learn marketable job skills, along with horticultural skills on the farm. According to Program Director Bill Mercer, there’s a compendium of other things which go into the care these men receive: “We drive them to job interviews, help them with studying for their G.E.D., connect them with volunteering opportunities, and we do enjoyable things with them too, like taking them bowling at West Point and hiking at Bear Mountain — things which show them that they can get enjoyment from things other than drugs and alcohol and that they are more than their addiction.” With many of the men wishing to stay “in the country” after graduation, they are also assisted with permanent housing and employment post-graduation.

In the words of Project Renewal, which serves 16,000 people overall in many different programs, largely in New York City, in their appeal for funding, “What’s the secret of Renewal Farm’s success? It is set in a special sanctuary in Garrison, New York, far from the neighborhoods and people that enable drug use. The natural beauty of the setting — along with integrated drug treatment and critical reentry services like job training, job placement and housing assistance — inspires change.” For CEO Netburn, even though Renewal Farm is but a small cog in Project Renewal’s wheel, it’s an important one. “These are people who have struggled with substance abuse for decades, and each is a life and each touches other people’s lives,” he says. 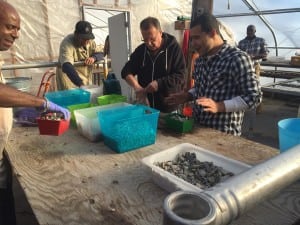 Vegetables and flowers are grown from seed by the residents of Renewal Farm.

Mercer has a deep knowledge about what he speaks: “I’ve been there myself, and I’ve never seen clients adapt so well to an environment. To remove people from the people, places and things which contribute to their addiction is a real eye-opener. Many of these men have never seen nature before — that’s one of the big plusses. And they see results: from a little seed into a beautiful plant. They come to understand that they can have a new beginning; they too can grow into a better and different person. My staff here at the farm are completely dedicated to renewing the lives of these clients. We’re in it for the clients and we hope to stay here for a long time. You have to be in it for more than money. It’s a blessing to do this — to come from that environment yourself and then be able to give back to this.”

The fundraising campaign for Renewal Farm has reached its immediate goal, but funds are still needed to keep the farm going beyond the next six months. Donations can be made at saverenewalfarm.com or at projectrenewal.org earmarked (a simple note will do) for the farm.