Tall County, the description-defying alternately plaintive and twisty roots/Americana/alt string band with strong roots in Garrison, has released its second (and fullest, with 14 songs) album, Featherweight, recorded in the Adirondacks and the Hudson Valley over several sessions in 2015. Featherweight is available for purchase and streaming at tallcounty.bandcamp.com. (Philipstown.info profiled the band in April 2015 when it played the Philipstown Depot Theatre.)

After listening to the album, we asked a few questions of Ned and Liz Rauch, who live in Garrison and are new parents. (The band’s third member, Colin DeHond, spends most of his time further north, in the Adirondacks.)

Q: Gestation has to have been a big theme around your household this year. Did growing a baby influence your songwriting?

Ned: Baby-growing spurred us toward finishing the songs and the record before baby-rearing began, as we weren’t sure how much time we’d have once Louise, who is now six months old, was born. Turns out we’ve still got time to write songs, but gigs are a bit trickier. But now I’m trying to figure out how to write songs worthy of this new, little life. I feel like they’ve got to be extra-significant, which, as I think about it, I realize is a recipe for writing lousy songs no one wants to hear. That’ll be something to sort out.

Q: Is there a different sound on Featherweight than the band’s first album, Shine? If so, how did this evolve?

Liz: I would say that Featherweight has a more sophisticated sound than that of Shine: our harmonies are better developed in this record and the parts are more considered. In recording Shine, we kept to a “live performance” method; that is, we didn’t record any combinations of instruments that we wouldn’t be able to perform live. There is an honesty to that approach that can be both challenging and rewarding. In Featherweight, we began with that approach but allowed ourselves to color the performances in a few cases with “impossible” parts: an extra guitar part behind Ned’s usual playing; two- and three-layer harmonies made up solely of my voice; Colin on percussion when he’s also playing bass. 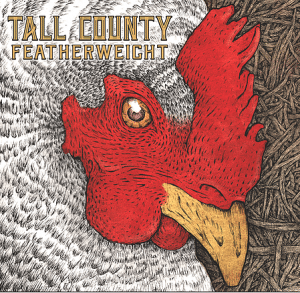 The cover of Tall County’s new album, ”Featherweight,” was designed by Matthew Chase of Philipstown.

Q: You’re obviously committed to a genre of music which doesn’t often lead to wide commercial success. As you get older, does that bother you, impede your devotion to it, or in some way does it spur you on?

Ned: Our music habit pays for itself: We produced this album with money we made from gigs, which is swell. Because we don’t rely on music to pay all our bills, it liberates us somewhat. But that’s just our situation. A lot of musicians really suffer because people — labels, consumers, streaming services, etc. — don’t seem to value music (live or recorded) very much, which is a shame.

Q: Some of your songs contain passages with let’s-see-how-many-words can fit in a short musical phrase. Others are quite sparse. Do you seek a balance between these when coming up with the 14 or so tracks which make up a full-length CD?

Ned: It just seems like some songs need a lot of words, either for narrative or rhythmic purposes; others don’t. A long record like this one needs variety. If we had a guitar break on every song, it’d be boring. Same logic applies to wordiness. And getting dressed! The other day, I found myself wearing a necktie and a scarf at the same time. Most days that’s not the case. Balance is key.

Q: How does the terrain and the environment of New York state, both this region and Colin’s Adirondacks base, influence you musically?

Ned: Judging by our lyrics, I seem to think a lot about rivers. And birds. New York City makes a few appearances in our songs as well. Mountains, too. But we don’t get too Empire State-y about it. There are no references to Shelly Silver or any of the other Albany heroes, for example.

Q: Looking at the line-up of instruments you play on this recording, per your notes — “It’s packed full of wild fiddle, low-down bass, shimmering guitar, fairly well organized vocal harmony and lots else, including dashes of mandolin and banjo and a soupcon of rummage-sale keyboard. We’ve even got a horn section” – when in the process do you decide upon instrumentation, and do you add in/take out components along the way before finalizing?

Liz: Well, the starting point will depend on who’s writing the song. When Ned writes, he typically does so on guitar, uke or banjo, so his songs start with one of those plus a fiddle and a bass. Colin generally writes on guitar. When I write, it’s on uke, so the starting lineup will be uke, guitar and bass. Once the song has its own legs — that is, a personality or core to it that doesn’t depend on our performance of it — we really try and listen for the effectiveness of the instrumentation choices we’ve made on it. Up to the moment of recording, any arrangement is up for questioning. A few examples from Featherweight: “Why Baby Why,” which started as a guitar-fiddle-bass song and was changed on the morning of its recording: guitar was replaced by uke and fiddle was dropped entirely. “Oh Henry” began as a banjo-tune in A major and ended up as a minor-key dirge with three horns, an organ, drums and no banjo at all. 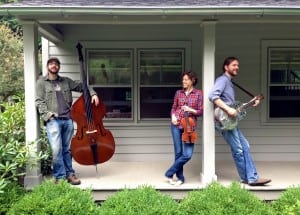 Q: What performances do you have planned to promote the CD?

Ned: We just played a couple of shows up in the Adirondacks and are trying to line up some gigs around here and in the city now. When we’ve got some dates, they’ll be on facebook.com/TallCounty.

Q: Can you talk a bit about Liz’s bread, and how and where to get it?

Ned: Yes. I can talk a lot about Liz’s bread. It’s delicious. It’s hearty. It’s organic. It’s gorgeous. It’s the best bread I’ve ever eaten. It’s all sourdough and it’s delivered every Wednesday and Saturday to our pals at Marbled Meats on Route 9 next to Vera’s and the Coffee Pantry. I wish everyone could try Liz’s bread. It’s joyful food.

Q: What are the benefits of raising chickens — album artwork aside? (And what about that CD cover?)

Liz: It’s not just that they provide us with fresh eggs; they eat grubs and stinkbugs, they fertilize the garden and take dust baths, which are surprisingly fun to watch. They can also be trained to come to you when you whistle, it turns out. As for the album art, that’s the beautiful work of our good friend and fellow Philipstowner Matthew Chase. He’s an ace of an artist and a top-shelf banjo player, too. He plays in a band with Mayor Merandy’s son, Jesse.

Inch for inch, pound for pound
They’re the meanest man-eaters in this town
They’ll swallow you whole, spit your bones out on the ground
Give you floods of affection till you damn near drown
When you need a little love and it can’t be found
Get you talkin about a snow-white gown
Try to put a ring around their finger but they won’t be bound
I’m gonna leave this sinkin city for some higher ground
Maybe a little mountain town, people smile,
they ain’t so tightly wound
Sniff me out like a couple a hounds
Don’t go, please stay, the pleas resound
Heard ‘em stop and turn around