Almost 400 in attendance at canceled school board meeting

With no Board of Education present to hear their comments, nearly 400 parents, teachers and concerned citizens packed the Seeger Auditorium at Beacon High School on Monday night, Jan. 11, criticizing a perceived lack of responsiveness from the school board and calling for the dismissal of Superintendent Barbara Walkley.

Several speakers (Meredith Heuer and Antony Tseng, along with Michael Rutkoske, who did not address the crowd) also announced their candidacy for the school board Monday night. Three of the nine seats on the board will be contested in May.

A board meeting had been scheduled for 7 p.m. but with only three members and Walkley — not enough for a quorum — present, it was quickly canceled. Scores of Beacon parents, however, remained, as hundreds more continued to file into the school’s auditorium.

By 7:10 p.m., when Heuer, the chairperson of the Beacon Arts & Education Foundation, approached the podium to speak, the auditorium was half-full, although the nameplates for Walkley and the Board of Education members were being removed from the empty table in front of the stage. 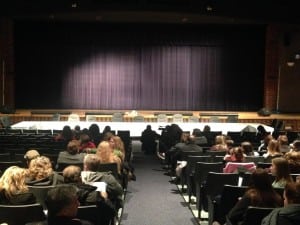 Parents begin to fill the seats on Jan. 11 facing chairs set out for board members at the front of the auditorium. (Photo by A. McKible/courtesy Advocates for Beacon Schools)

No longer an official meeting, the gathering continued for about another hour, as a number of speakers addressed the crowd, many drawing applause with the refrain “Beacon kids deserve better.”

“It was an incredible swell of support for change,” Heuer said Wednesday.

Parents’ issues with Walkley date back to her appointment in early 2015 and seemed to intensify last summer, when 27 Beacon City School District teachers were reassigned across various schools and grade levels. The move occurred in June, a day before the school year ended, and appeared to be decided behind closed doors, said Kristan Flynn, one of the organizers of the grassroots Advocates for Beacon Schools organization.

“It seemed like the public had some information that countered the administrative story,” Flynn said on Wednesday. “It felt like, ‘OK, something bigger is going on.’”

As discontent continued to mount among many parents, Melissa Rutkoske — the wife of Michael Rutkoske, the school board candidate — filed a petition in December with the New York State Education Department over “troubling, unethical, inappropriate and illegal behaviors” among district leadership, including an allegedly inappropriate relationship between Walkley and former teachers’ union president Kimberly Pilla that Rutkoske claimed involved sharing confidential information.

Walkley did not return calls and emails from The Paper seeking comment.

The petition, which included copies of emails sent to Pilla’s union account, called for Walkley’s dismissal and the appointment of new legal counsel “due to the failure of the attorney to protect the (Beacon City School District) from this behavior.” 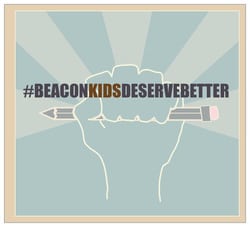 In an 18-page response, the district’s attorney, Michael Lambert, dismissed Rutkoske’s complaint as a “personally motivated vendetta” and wrote that the petition “fails to cite any district policy that was allegedly violated or any taxpayer funds that were allegedly misused.” While acknowledging that Walkley and Pilla do have a “close personal friendship,” he wrote that any attempt to “suggest through innuendo something salacious” was “outrageous and offensive.”

At Beacon High School on Monday night, Melissa Rutkoske was one of around a dozen speakers who addressed the crowd, which was announced at 376. She said that she fully expects her petition to be rejected by the state.

“Do not think that the state will come in and help us,” she said. “They will not. We have to do it ourselves. We have a big problem here, but it’s one we can fix.”

Also among the speakers were John Burns, the current Beacon Teachers’ Union president, and Larry Cohen, a former three-term board member who is now on the Fishkill Town Council.

“This is despicable, even by their standards,” Burns said, motioning toward the empty meeting table. “We can’t let this stop us. We will continue to fight and bring about some positive change in the district. They think we’re going away, and we’re not going away.”

Cohen said that while he initially supported Walkley after her appointment, he has observed inappropriate relations between school board members as well as other unethical behavior. “The consideration of multiple resignations should be placed on the table immediately,” he said.

Although Walkley did not respond to The Paper, she told the Poughkeepsie Journal on Monday that she does not intend to resign.