Facing a tax cap of 0.12 percent for the 2016-17 fiscal year, Village of Cold Spring trustees will again be challenged to produce a budget that provides necessary services while staying within the state-imposed spending limit.

As part of her monthly financial report at the board’s Jan. 12 meeting, Village Accountant Ellen Mageean said the tax cap will restrict spending to an increase of $1,882 next year within a tax levy of $1.6 million and a total budget of just over $2.8 million. The budget includes the Main Street project, the majority of which is being funded through a federal grant.

Mageean said there may be a small increase in the spending limit after the state calculates the village “growth factor.” That could result in an allowable spending increase of about $3,000 at most, “and that’s on the high end,” she said.

Deputy Mayor Marie Early underlined the difficulty that the cap presents, pointing out that some village expenses such as the cost of employee health care will increase significantly next year.

The village board can choose to exceed the tax cap but must pass a local law to do so. A tentative budget will be drafted by March 18 with a public hearing to be held in mid-April. The village board must adopt a new budget by April 29. In the unlikely event that trustees cannot agree on a final budget, Mageean said state law requires that the tentative budget be adopted.

The cost of being efficient

Village budgeting became even more daunting when the previous board accepted the state’s challenge to reduce spending by one percent a year for each of three years, 2016, 2017 and 2018, through efficiencies. That has been accomplished so far through measures such as eliminating the parking enforcement officer, improving the office phone system and savings in the cost of general insurance, part of an efficiency plan submitted to the state by the village.

When the one percent challenge is met, village residents receive a small rebate check, although the amount is so small that at Tuesday’s meeting trustees questioned the value of the effort, especially in light of the spending restrictions imposed by the tax cap. “A plan is a plan — it doesn’t (necessarily) mean it gets carried out,” said Trustee Cathryn Fadde. She said the parking enforcement officer, which the parking committee advocates reinstating, is a self-funding position.

Early added that officials from the New York Conference of Mayors (NYCOM) had indicated to her that the state has no mechanism in place for monitoring municipalities’ adherence to the efficient plans they submit.

The village’s efficiency plan also included possible cost savings that would result from moving Cold Spring’s election to November. If that were done, the Putnam County Board of Elections would bear the entire cost of the election, a savings to the village of more than $6,000.

The discussion over whether to move the village election from March to November continued as a formal agenda item. Mayor Dave Merandy has not endorsed moving the election, but said it should go to a public referendum to settle “once and for all” a debate that has been going for some time. A referendum is required if the date is to be changed; the board cannot make the switch on its own. “I really think the community is split” on the issue, Merandy said. By going to a referendum, he said, the democratic process would decide the issue.

Trustee Michael Bowman spoke against moving the election, arguing that holding it in November would make it part of a contentious national election cycle. “It’s not going to be Cold Spring anymore” if the election is moved, he said. Asked by Merandy for his view on deciding the question through a voter referendum, Bowman said he did not support the idea. 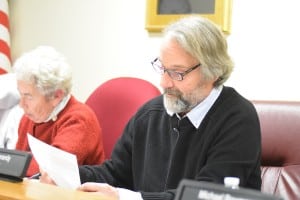 Mayor Dave Merandy feels a referendum will decide the election date question, ”once and for all.” (Photo by M. Turton)

Trustee Fran Murphy disagreed, saying that the best way to answer the question is to let the voters decide. Fadde seemed to support the notion of a referendum. She commented that perhaps voters need to be fired up to get them out to the polls on the election date question and that “if they stay home, they get the government they deserve.”

Although discussion of the election date was on the agenda, only three residents attended the meeting and spoke to the issue. Michael Armstrong argued in favor of a November election while Frank Haggerty spoke against it. Kathleen Foley supported the idea of deciding the issue through a referendum and advocated more public discussion of the pros and cons of changing the date.

Trustees will vote on Jan. 26 as to whether the question will be put on the ballot for the March election.

“What a difference a month makes” is how Superintendent of Water and Sewers Greg Phillips began his monthly report. In December, village reservoirs were at 58 percent of capacity. But the mild temperatures of the late fall and early winter have brought rain rather than snow, and within the past month reservoirs have risen to 96 percent of capacity. The board moved to immediately remove the restrictions on outdoor water use that had been in place.

Phillips also reported that he would make a recommendation regarding replacement of water meters throughout the village by the end of January. The meters, almost 900 in number, are 18 years old and approaching the end of their usable life. New cellular meters will permit the water department and residents to monitor use remotely on a daily basis.

At the wastewater treatment plant, Phillips said the new electrical service is online and powering the facility, including the recently upgraded aeration system. The new equipment and electrical service will greatly reduce the cost of operating the plant, he said.