As Philipstown residents settle in for the cold winter months, two local charitable organizations are appealing to the public for help. One makes sure families have food and coats. The other cares for animals that otherwise would not have a home.

The Philipstown Food Pantry provides nourishment for as many as 50 families, and winter signals the need for hot foods. “This time of year, clients are in particular need of hot cereal, soups, stews, broth and hot beverages such as tea, cocoa and coffee,” said Andrea Bach, the pantry’s volunteer coordinator, adding that low-sodium products are preferable, especially for seniors. 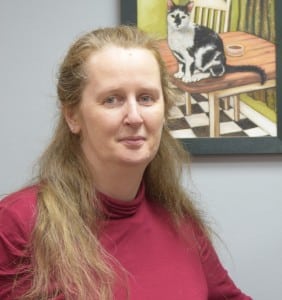 Bach said donations to the pantry sometimes tail off in winter, a time when they are especially needed. “During the holidays everyone steps up; there’s an abundance of contributions,” she said. “What’s so good about this town is that donations never really stop — but they do slow down a bit after the holidays.”

Contributions can take several forms, but Bach stresses that a cash donation is by far the most cost effective. “Money does the most good in terms of the amount of food purchased,” she said, explaining that the pantry uses cash donations to buy food from the Hudson Valley Food Bank in Cornwall at greatly discounted rates, paying only a few cents per pound.

Residents who have already purchased food items can drop them off at the pantry, located in the First Presbyterian Church on Academy Street in Cold Spring. Drop-off is on Saturday between 9 and 10 a.m. or Monday through Thursday from 9 a.m. to noon.

Foodtown shoppers can donate their Club Card points at the checkout as well as coupons earned for a free turkey or ham. Gift cards can also be donated. “Foodtown has been really supportive,” Bach said.

The pantry is also looking for help with transporting food from the regional food bank to Cold Spring. “We need volunteer drivers to pick up food in Cornwall, something we do about twice a month,” Bach said. Volunteers currently use a station wagon or a small SUV but Bach said that a bigger vehicle is needed to adequately handle the twice-monthly runs. “A pickup or a large commercial van would be much better,” she said.

Bach also emphasized that volunteers are needed year-round, “especially people with ideas for fundraising and the time and ability to help organize events,” she said.

Houlihan-Lawrence Real Estate collects coats throughout the winter at its office at 60 Main Street in Cold Spring and distributes them through the Philipstown Food Pantry. Associate Real Estate Broker Abbie Carey, who takes the donated coats to the pantry each week, said the community has been very generous. One donation stands out so far this year, she said. “We received five large bags of coats from a Garrison resident working at the Veterans Hospital in Montrose,” Carey said. “The coats were for children and the hospital only takes coats for adults.”

Winter coats for children or adults can be dropped off at the Houlihan-Lawrence office daily between 9 a.m. and 5 p.m. This is the sixth year that the company has overseen the program.

Various types of clothing as well as shoes, sneakers, belts, purses, bedding, draperies and stuffed animals can also be donated at the drop-box at St. Mary’s Church in Cold Spring. Receipts for tax purposes are available at the box, which is operated by St. Pauly Textile. Donations are distributed to needy families locally and throughout the U.S. and globally.

Helping animals get through winter

Sanctuary President Heather Canavan said most animals end up at the sanctuary because their owners grossly underestimated the work involved with keeping them as pets. “Adele was nothing but skin and bones” when she arrived, Canavan said, adding that the pig had been abused. She is anything but skinny now. “We weren’t equipped to take in a pig,” Canavan said. “But no one else would take her.” The sanctuary’s small barn was not designed to withstand a pig, and Adele has taken a toll on the wood. 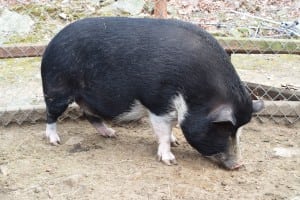 Adele was ”skin and bones” when she arrived at the sanctuary. (Photo by M. Turton)
M. Turton photo

“We need building materials and people with the skills to construct a small, proper barn,” Canavan said, estimating that a structure as small as 10 square feet would do the job. Alternatively, she said she would consider moving some of the sanctuary’s animals to an appropriate barn offsite if a suitable building is made available.

Just as critical, food to last through the winter is needed for all of the animals. “Our food needs include hay, goat, chicken, pig and parrot food as well as canned dog and cat food,” Canavan said. “And we desperately need scoopable cat litter.”

The sanctuary is intended to be a “forever home” for its residents but the current population has outgrown capacity. Homes are being sought for the cats, rabbits and ducks. “The ducks really need a pond,” Canavan said. The boa constrictor, which was found dying in a dumpster, also needs a home and comes with a beautiful, appropriate cage, she said. 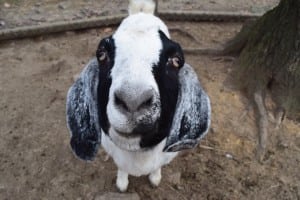 This goat is not camera shy! (Photo by M. Turton)

Canavan praised Garrison farmer Sandy Saunders, who has donated hay a number of times, and also the Manitou School in Cold Spring for a vital financial contribution.

Contributions to Shepherd’s View Animal Sanctuary are tax deductible and can be made through the organization’s Facebook page. Inquiries regarding donations of food, construction materials, carpentry and use of off-site barns, and animal adoption can also be made there.