One closes unexpectedly, another opens

It’s a cold Monday morning outside the Tabernacle of Christ Church at 483 Main St. in Beacon and the city’s newest soup kitchen is minutes away from opening its doors for lunch. There’s just one problem: The food hasn’t shown up.

Candi Rivera, who runs the soup kitchen on behalf of her nonprofit organization In Care Of, is on the phone with a social services group that was going to drop off enough pre-cooked food to feed about 25 people — Rivera calls them her “guests” —who will be showing up any minute. A recently injured foot is the only thing that’s keeping her from nervously pacing back and forth as she tries to figure out if the food is coming.

It’s not. She hangs up, looks at the eight assembled volunteers and says, “Well, we’re just going to have to do this.”

Rivera ducks out to the store to buy half a dozen loaves of bread while the volunteers (and anyone else who happens to be passing by) make coffee, set tables and thaw bricks of frozen cheese with their hands. The ancient massive stove in the church basement sputters as volunteer John Kelly fires up a skillet the size of a car tire. A donation of potatoes, onions, peppers and spinach gets diced and sauteed before being dumped into a roasting pan and slid into the oven.

“We’ll call it potato surprise,” said Kelly. This is his first time volunteering at the soup kitchen and he’s here on his birthday. His wife, Zoe Markwalter, who’s washing serving bowls and cutting boards, was one of the people who helped get the kitchen up and running in November after budget restraints forced the Salvation Army in Beacon to close their soup kitchen without warning. 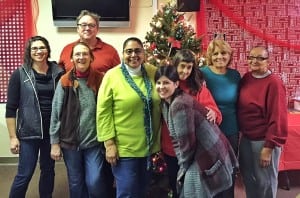 Volunteers at the Beacon Soup Kitchen after a meal. Candi Rivera, who runs the kitchen, is fourth from the left (photo by B. Cronin)

“This is what makes our soup kitchen unique, I think,” Rivera says 20 minutes later with a smile as volunteers serve plates of potatoes and scores of grilled cheese sandwiches. “When there’s a problem, the volunteers just jump in and get it done. Ninety-nine percent of the people involved here are part of the Beacon community. Originally we talked about this being a temporary thing, but if the community can sustain this then we can make it permanent.”

Pitching in and getting it done is what made the Beacon Soup Kitchen happen. On Nov. 14, shortly after the Salvation Army had closed, a group of community leaders met at the First Presbyterian Church, including Rivera, Markwater and other members of Common Ground Farm, and Dutchess Outreach. The church, who has been running a soup kitchen on Saturdays, agreed to open on Fridays, as well. Rivera knew that United Tabernacle had the space. All they needed was a commercial refrigerator, a reliable stove, volunteers and food. The group made plans to meet again.

They didn’t need to. On the following Monday, Dutchess Outreach told Rivera it could donate food to get the kitchen going. Ella’s Bellas in Beacon donated a consumer refrigerator to hold the kitchen over until they could find a larger, commercial one. On Tuesday, members of United Tabernacle made a flier. On Wednesday they distributed it. Thursday they opened.

Only six people showed up for the meal, significantly less than the 45 or so the Salvation Army was serving on a regular basis.

“We knew we still had to let the word get out,” Rivera said. “I went around to the guests and said ‘OK, I need something from you. I need you to go out and tell people you know that we have a new soup kitchen here and that they’re welcome to come.’ ” Soon the kitchen was serving around 25 people a day, but Rivera knows that the need is greater.

“There are people like single parents who work, families, who need this but can’t come when we’re open” on Monday to Thursday from 11 a.m. to noon, she said. Eventually, Rivera would like to serve at locations throughout town on Sundays, when more people could take advantage of the program.

The Beacon Soup Kitchen is still looking for a commercial refrigerator, a reliable stove (“The stove top is pretty good, but sometimes the oven acts up,” Rivera said) volunteers, food and cash donations. Prospective volunteers can sign up online through the Beacon Soup Kitchen’s Facebook page or by calling In Care Of at 845-831-1300. Tax-deductible cash donations from individuals and the Beacon Sloop Club, as well as a grant from Sam’s Club, allow Rivera to make emergency runs to Key Food when something is needed or to trips to wholesale markets to buy things like meat in bulk, which can then be frozen.

For food donations, Rivera said she needs non-perishable food in bulk that can used to make large meals either at the kitchen or at home by volunteers. “We have a lot of good cooks in this church that I’ve been calling on,” she said. Long-grain rice, crushed tomatoes, dried beans, cooking oils, salt, pepper, hot sauce, pasta, coffee, tea, sugar and spices top the list. Disposable utensils and serving ware are also always needed, as well as anything perishable that can easily be frozen such as cheese, butter or broth. Donations can be dropped off at the church Mondays through Thursdays from 10 a.m. to 12:30 p.m., or by making an appointment with Rivera.

For now, the kitchen will remain at United Tabernacle. “Will this be the place forever? Only God knows,” Rivera said, as her satisfied guests begin making their way back outside. “Good lunch today!” said one to those cleaning up in the kitchen before leaving. Rivera smiled and thanked her.

“She’s not just saying that, you know,” said Rivera with a laugh, after the woman had left. “She tells it like it is. On days when the food’s not so good, she lets us know!”