On Monday, Jan. 11, Haldane High School’s chapter of the National Honor Society (NHS) inducted 46 students and elected six seniors as officers at a dinner at the Taconic Outdoor Education Center in Cold Spring.

Kristen Peparo, a math teacher at Haldane, and Nancy Martinez, an English teacher, who serve as advisors to the group, welcomed parents and relatives and members of the school administration before Haldane High School Principal Brian Alm pushed students to consider the weight of their achievements and build upon them in their future. Martinez also shared the history and background of the NHS, which honors academic achievement. 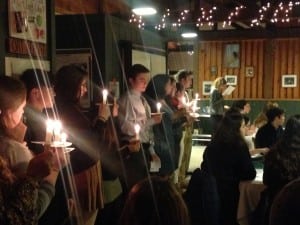 Each of the new officers spoke about one of the four pillars of the NHS: Anna Birn (president) discussed service, Corydon Zouzias (vice president) covered scholarship, Melissa Tringali (treasurer) addressed leadership and Maisy Curto (one of three secretaries, with Allison Marino and Adele Westerhuis) spoke on character.

Each officer lit a candle representing their pillar, and then the members were called up individually to give a brief speech about the pillar of their choice. Members also lit their candles and recited the National Honor Society pledge before District Superintendent Diana Bowers closed the ceremony.