The saying that money goes out as fast as it comes in is a good thing as far as the Community Foundations of the Hudson Valley (CFHV) is concerned. It’s what it’s all about, in fact. This independent philanthropic organization gives and receives: working with people who wish to become philanthropists and helping them support the charitable causes they feel most drawn to, on the one hand, while providing, from pooled funds, grants and other support to community organizations in need, on the other.

There are approximately 700 such foundations nationwide, handling roughly $35 billion in assets. Dutchess County accounts for nearly all of the CFHV’s assets, administering some $49 million in assets for 470 funds; with Ulster overseeing about $2.7 million in 58 funds and Putnam County $246,000 in nine funds.

The Community Foundation for Putnam County has maintained a low-key presence since its founding in 2008, but now, thanks to a $100,000 matching challenge grant by the Dyson Foundation for projects of lasting impact, and the appointment of Nancy Rossi Brownell, a Cold Spring native, longtime volunteer and CFHV board member as vice president of Putnam, its profile is rising. Brownell, along with CFHV board member Nat Prentice, are spreading the word about the benefits to Putnam communities reaped through working with the Putnam foundation.

For Brownell, involvement with the CFHV began with a party — the foundation’s annual garden party benefit. Brownell’s in-laws had set up a scholarship fund through the foundation, and a few people at the party suggested she join their benefit committee. She rose through volunteer ranks through the years and, recently, she found herself “stepping out of volunteering and stepping in” as a foundation employee. 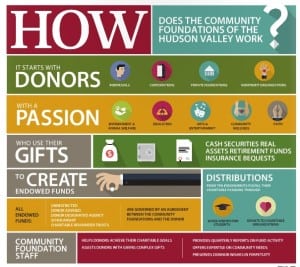 A chart from the CFHV annual report explains how it works. (Click to enlarge)

Prentice, who has long roots in Garrison, became familiar with the foundation while studying “to get me more initials after my name,” he jokes. During the process of obtaining those initials — CAP, for Chartered Advisor in Philanthropy — he became familiar with the organization and “came to understand that it defies a one-sentence description; I got fascinated.” When friends on the board came calling, hoping he’d become involved in a “you’d be helpful in helping people become aware of what it is” kind of way, he joined them.

Prentice is pleased to be working with the CFHV of Putnam County, noting that he speaks with both donors and nonprofits and thinks “many feel a little neglected in Putnam. Everyone’s excited that we are on the ground. There’s a lot of need here, and sometimes people feel ignored. This way private funds can benefit particular charities.” 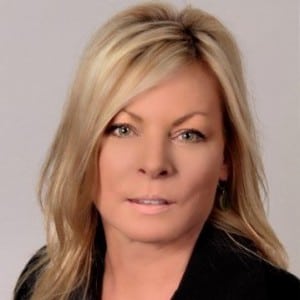 Looking first at the giving side of the equation, Brownell says people often think establishing a charitable fund is only for the very wealthy. “A lot of people have charitable goals, but think they don’t have the means to do it,” she says. “We help them to, in a thoughtful way. You can write a check to something you care about but not know where it’s going. We do. When we dispense money out to a nonprofit on your behalf, we know what they’ll be doing with it.”

Community foundations work with individuals and businesses and with those who serve them: attorneys, accountants, financial planners, etc. designing gift plans specific to the donor’s situation and instruction and aligned with the donor’s values.

There are other benefits, according to Brownell: “When you start something up with us, it is in perpetuity. This can help with potential family disagreements and succession difficulties and other situations which do arise. And sometimes particular nonprofits go out of business; if that happens, we can approach the redirection of funds in a very mindful way, knowing the intention of the foundation.”

The establishment of funds needn’t solely be through cash. It can be donations of real estate, stocks, valued artwork, IRAs, “many different types of vehicles,” according to Brownell. And the funds themselves can be set up in a number of beneficial ways, including supporting a specific charity, or broader programs in the arts, for community health, faith-directed, education, animal welfare, virtually anything. 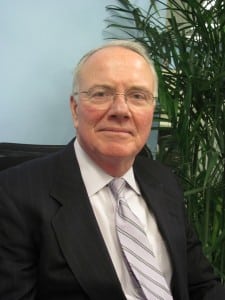 Funds can be restricted to one particular thing, or unrestricted, with just a directive to be given back to a particular community. And they can be directed to entities outside of the geographic area, as well — such as an alumnus directing funds towards an educational institution in another state.

Along with more traditional unrestricted, donor-designated, trust and scholarship funds, there are also special “Donor Advised Funds,” which Prentice calls, “a simple vehicle; they are set up and can be pre-funded, giving a tax credit, with the monies dispersed in later years. You can choose how and when to disperse and the community foundation does it for you.”

In fact, donors are sent periodic lists detailing particular donation opportunities, and these can be very specific — for instance a recent one provided the opportunity to fund an excursion to the Bardavon in Poughkeepsie for a group of seniors. The small scale nature of it is precisely what makes it a community foundation. “These funds pass to your heirs,” Prentice explains, “and it’s a way of establishing your wishes beyond your life.”

Working with the monies from established funds, CFHV has an investment committee which consists, Brownell says, of “top experts in the field. Historically we have done very well. These volunteers are recruited for their expertise and tend to be a group made up of community activists and leaders.”

Prentice notes that the CFHV investors “have the luxury of taking a permanent approach to it.” Gifts are invested for growth and income, and a set amount is designated for grants which will strengthen the community. Once a gift has been made, the donor may choose to stay actively involved with the grant-making process, or simply leave that function to the foundation.

A sampling of Putnam County nonprofits which have received gifts from funds established with CFHV includes many familiar names, among them: Manitoga, St. Christopher’s Inn, PARC, Support Connection, Graymoor, Hudson Valley Seed, Green Chimneys, Hudson Valley Shakespeare, the Putnam Humane Society and local fire departments and food pantries. Beneficiaries in other counties the CFHV serves have included libraries and community housing groups, and many funds have been directed toward food and hunger initiatives.

There are also 11 scholarship funds available to Putnam County students as well as Partnership in Education grants open to teachers in the county who submit proposals, which in the past have ranged from equipment needs to field trips.

Information on these funds (the application deadline of the partnership grants is March 15) as well as larger CFHV endeavors is available at cfhvny.org. To contact the foundation, call 845-452-3077 or visit its site.