Following a community potluck, Hasan Azad, a doctoral candidate in Islamic Studies at Columbia University, on Jan. 17 offered food for thought on civil rights and Muslims in America during the 20th annual gathering and lecture to honor Dr. Martin Luther King, Jr., at the Desmond Fish Library in Garrison.

In addition to tracing the history of “othering” in the western intellectual tradition, Azad explained the corruption of Islam by the terrorist group ISIS before ending on a note of hope inspired by Dr. King’s belief that moments of crisis yield opportunities to make the American dream a reality.

“Racism runs through the veins and arteries of the United States,” Azad said, due to the country’s Enlightenment foundation and colonial history, which made it necessary for white Europeans to identify groups as “inherently different from and inferior to” themselves during their colonization of the “new” world.

The scholar cited as part of Americans’ collective unconscious the elimination of Native Americans; 350 years of slavery; discrimination against Jews, Italians and the Irish; and the internment of Japanese citizens during World War II. He argued that “Western intellectual tradition is fundamentally rooted in the idea of othering, of creating difference, of degrees and levels of preference and subjugation.” He said it is “no simple quirk of fate” that anti-Muslim rhetoric in America has emerged as “massive structures of institutionalized racism” against blacks and other minorities are exposed.

The us-versus-them mentality, Azad said, has roots in the modern Cartesian notion of the individual subject confronted by an object it seeks to know, to name and implicitly to dominate, often without adequate consideration for the independent existence of a world beyond the self. Thus the “other” is invented by the self, sometimes out of “fear of darker aspects of ourselves that we want to stamp out.”

For Westerners, he suggested, these aspects might include the acknowledgment that modern ideals of reason, freedom, justice and equality have yet to be fully realized in Western nations, and that many Western freedoms exist at the expense of freedom elsewhere. Muslims have been “othered” in the West for a long time, Azad said. 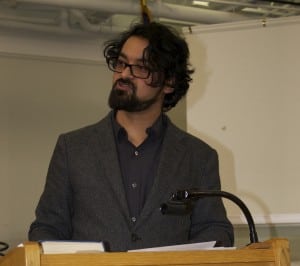 In the wake of the Paris attacks, the question, “Is Islam violent?” has become for the West more rhetorical than genuine, in Azad’s view. ISIS is “doing unimaginable things in the name of Islam,” Azad said, but stated that ISIS is without “historical or intellectual substance, an Islam that bears no resemblance to the Islam that it is trying to replace or the Islam it is seeking to recreate.”

According to Azad, ISIS draws inspiration not from Islam but from Wahhabism. This anti-intellectual sect emerged in the 18th century with the claim that its followers sought to purify Islam by purging idolaters. Wahhabi’s followers gained land in exchange for granting political legitimacy to the Saud regime in 1932.

The Islamic State, Azad said, is a “contradiction in terms,” considering that states are an invention of modernity, “a function of diplomacy among European powers competing for the wealth of colonies.” Sharia law, which Azad noted was originally local, ethical and non-punitive, became reconfigured in the modern state, losing the institutions that kept it rooted in people and communal cohesion. As a result, it was no longer a subject for intellectual study and development, and is therefore no longer fully understood by those who claim to implement it.

To conclude his lecture, Azad read from the transcript of a 1968 television interview in which Dr. King described American blacks as living in a “triple ghetto of race, poverty, and human misery,” noting that those who rioted were few, but that “a destructive minority can poison the wellsprings from which the majority must drink.”

The solution, in Dr. King’s view, was to find solutions to real social problems. “We are in a moment of crisis, but every moment of crisis not only has its danger point but has its opportunities,” King said. “My great hope is that America will see the opportunities to make the American dream a reality.”

Sharing that hope, Azad suggested the audience consider three questions: (1) “To what extent have these conditions described by Dr. King really changed for blacks in America? (2) To what extent are these conditions entwined with issues of Islamophobia, a symptom of deeper issues? And (3), how can we think ahead and move forward globally and locally for the sake of all humanity and all the world’s inhabitants?”