In a wide-ranging interview with Philipstown.info/The Paper, U.S. Rep. Sean Patrick Maloney expressed regret over his “yes” vote in November on a House bill that sought to certify procedures for admitting refugees from Syria into the United States. The hastily written American Security Against Foreign Enemies (SAFE) Act of 2015, passed by the Republican-led House but was never taken up by the Senate, came in the wake of the terrorist attacks in Paris that killed 130 people.

“Let me say something to my progressive friends,” said the Democrat, who represents the 18th Congressional District of New York, which includes Philipstown and Beacon. “I think I blew it on that vote. But what I want people to know is I thought there was a better way forward. We should be able to guarantee to the American people that refugees don’t pose a threat. The people we have been admitting from Syria are mostly kids and old ladies and people with family here. There has not been a single incidence of violence from anyone we have admitted.”

“I just didn’t think it made sense not to certify that and stand behind it,” he added. “And I thought the president was missing an opportunity to build bipartisan support for admitting more refugees as he wants to do to meet the need and do so with support from the American people.”

The legislation would have further tightened the certification process for refugees from Syria and Iraq hoping to enter the U.S. by requiring three agencies (the FBI, Department of Homeland Security and the Director of National Intelligence) to affirm that a refugee applicant is not a threat to Americans. President Obama and refugee advocates have argued that stringent screening is already in place for refugees, with wait times approaching two years. 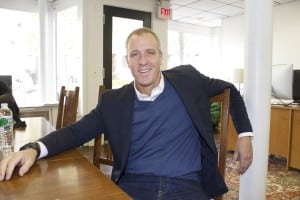 At the end of a discussion of the terrorist threat from ISIS and the refugee problem facing Europe, Maloney was asked about his position on refugees coming to the U.S. and his rationale for his vote. Maloney said his basic position that further certification would help convince a broader swath of the American people that admission of more refugees is doable hasn’t changed. However, he said he regretted that his vote gave the wrong impression of his intent.

“What the issue became in the Congress was a symbolic debate between the two sides,” he said. “I think I missed that. So,  while I continue to believe there was a better way forward to stand behind the extensive screening process we already use and improve on it to help refugees who desperately need help, I think I missed the symbolic meaning to people and I am sorry about that.”

Maloney is in the second year of his second term and faces re-election in November. He has told The Paper in the past that he is especially proud of his work in 2015 on federal road and rail infrastructure legislation as a member of the House Transportation Committee. The bill, which received bipartisan support, will fund a variety of projects to upgrade highways, mass transit systems and, Maloney stresses, local bridges, which he said he particularly advocated for. 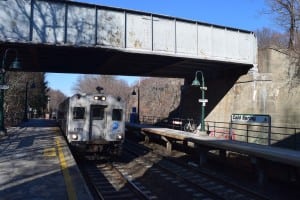 Money for better train safety technology, another Maloney special issue, is also in the bill, which he said would benefit both the Metro-North system and the freight line on the west bank of the Hudson “where oil trains are a tremendous danger.” Maloney stressed that the legislation is ”fully paid for with real dollars,” allowing state and local officials to propose and plan projects.

Healthcare provisions for first responders on Sept. 11, 2001, were made permanent in the last year’s budget bill, another issue Maloney said he made a priority. “One of the worst things I’ve seen in Congress is them coming down to Washington and standing outside in the cold,” he said. “Now they won’t have come down and beg.”

Maloney also heralded last year’s Every Child Succeeds legislation, which he supported. He said it corrected the national approach to student testing and returned more control to the states. The bill replaced the No Child Left Behind law, which originated in the George W. Bush administration.

Throughout the interview Maloney made reference to working with Republicans to accomplish goals. “I made a decision at the outset to get things done,” he said. “I chose imperfect progress over perfect gridlock,”  citing issues such as crop insurance, train safety and better care for military veterans where he said he was able to work across the aisle.

“Republicans run Congress [the party has a majority in both houses] and most local officials in the district are Republican so that’s who I have to work with to get things done,” he said.
Maloney said he was able to address the coordination of federal programs to combat Lyme disease, a growing problem in the Hudson Valley, by working with the Republican Chris Gibson, who represents the 19th Congressional District.

Maloney believes there is a bipartisan opportunity for progress on criminal justice reform in the present congressional term. He said he wanted to work on making progress on the use of federal dollars for more drug treatment options, such as in the pre-booking stage of a police action.

Further, he said he was supportive of state initiatives on reconsidering treating 16- and 17-year-olds as adults. He also favors increasing educational opportunities in prisons, but said he understood the reluctance of many to use tax dollars to fund the programs. He supports New York governor Andrew Cuomo’s proposal to use forfeiture money from the Manhattan District Attorney to pay for college classes in state prisons.

The U.S. House traditionally has less influence on foreign policy than the Senate, although if a president wants to fund programs or wars he has to come to the House because funding bills originate there.
“Americans should not [have to] take all the casualties and spend all the money” in the battles for control of Syria and Iraq and to battle the Islamic State. “Our Syria policy is not working, said Maloney.”

He said he hoped the president could “rally the world to a true coalition” with “the moral authority to do something” toward destroying ISIS. He expressed regret the president had “missed an opportunity in the aftermath of the Paris attacks” in November to act toward this goal.

He did, however, praise the administration’s nuclear deal with Iran, which he said was “going pretty well.”  He thought it vital to maintain strict compliance but acknowledged “we’ve made it much harder for them to get a nuclear weapon.”

Maloney said he enjoyed good working relationships with Philipstown Supervisor Richard Shea and Beacon Mayor Randy Casale. He said he was excited to see the progress being made in Beacon now spreading to Newburgh.

He said he had worked on land conservation language in the congressional agriculture bill (he also serves on the Agriculture Committee) and believes preserving open space to be a critical factor in creating economic opportunity.

The challenges of increasing rents and first-time home ownership are issues Maloney said he often hears about from residents. He said he is working on legislation that would allow a first-time homeowner to withdraw money tax-free from an IRA for the down payment.