As Americans grappled with the events unfolding in Ferguson, Cleveland, Staten Island and other places as a result of unarmed minorities dying at the hands of police officers, Beacon Mayor Randy Casale and Chief of Police Douglas Solomon discussed how to make sure that the same thing didn’t happen in their city.

After convening members of the clergy and other community leaders, a group called Beacon Speaks Out was formed to examine how to improve relations between Beacon residents and the police force. “Our goal was to be as proactive and as transparent as possible, so that mistrust doesn’t grow or breed,” said Solomon.

Now, after a year of discussions, on Saturday, Feb. 6, at 1 p.m., Beacon Speaks Out will hold a public meeting and workshop at the Memorial Building, 413 Main St., to share its progress and goals. 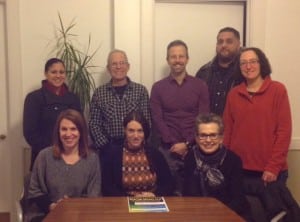 The group last held a public workshop in May to examine the relationship between the department and Beaconites. After soliciting comments and ideas, Beacon Speaks Out met weekly to distill that feedback into eight recommendations. The group then worked on implementing its plans.

Changing the public’s perception of the department was one of Chief Solomon’s main goals four years ago when he took over as police chief after serving in the same position in Monticello for nearly 10 years.

“The Beacon Police Department had a negative reputation with a lot of members of the community when I got here,” he said. “Whether that reputation was justified or not, isn’t for me to judge. I’ve just had to know that it existed.”

Solomon said he has tried to be more accessible and visible than his predecessors, strolling down Main Street whenever possible and attending community events. “There was also an attitude here of ‘That’s the way we’ve always done it,” he said. “That’s not a good answer.”

Solomon admitted that some members of the department were initially suspicious of Beacon Speaks Out. “We’re police officers, we’re suspicious by nature,” he admitted. “That’s our job.” But as the group continued working throughout the year, he said it became clear that the two organizations had shared goals. “There were no hard pills to swallow here,” he said. “A lot of the things they suggested we were working on anyway.”

Some suggestions have already been implemented. This fall, the department began “sector policing,” which involves splitting the city into three sections (north of Main Street, South of Main Street, and east of Fishkill Avenue). This approach allows officers to concentrate on certain areas of town and spend more time out of their patrol cars, walking the streets and engaging with the community. The city also recently approved funding of a dedicated Main Street officer and members of the force have begun training in crisis intervention, and will soon begin additional training in nonviolent conflict mediation.

“Obviously we’re already try to de-escalate things as it is,” said Solomon. “It makes things easier. But some officers are better at de-escalating things than others, depending on their personalities and demeanors.”

The department will be posting police blotter reports online in addition to their current print incarnation in the weekly Beacon Free Press. And thanks to a grant, the department will roll out body cameras on officers over the summer that will integrate with the cameras already installed in patrol cars. “The officers actually want the body cams,” said Solomon. “We’ve had a number of situations in the past that ended up in personnel complaints and lawsuits that, if we had had body cameras at the time, would have been resolved.”

Solomon said his department will need the sustained help of the community in order to act on all of the recommendations, which is where the meeting on Sunday comes into play. In addition to presenting the recommendations and initiatives, Beacon Speaks Out will be looking for volunteers. “If we’ve learned anything in this past year, it’s that it takes a village,” says Brooke Simmons of Beacon Speaks Out. “It takes having support from the broader community.”

Diversifying the police force, for example, won’t happen unless the community gets involved. Of the 31 Beacon police officers (with three or four more due to be hired), one is female and five are minorities. As of 2013, Beacon’s population was 43 percent minority.

“The minority community has to buy into getting our young people involved in civil service careers,” said Solomon. “Not just as police officers but government jobs in general. That’s something that I know the mayor has been pushing for, that the high school should be encouraging people to look into civil service jobs. Our ability to go out and recruit is limited. It’s a got to be on a community level with the school district involved and we need minorities to take the test.”

Simmons agreed that going forward, the Beacon City School District needs to be part of the initiative. “The youth are such a big stakeholder in all of this,” she said. One of Beacon Speaks Out’s proposals, Get Home Safely, would work on informing youth about their rights and responsibilities as citizens and provide tips on staying out of trouble.

“We’ll need volunteers to get this program up and running, and to make it sustainable,” she said. “When these issues come up, we make a lot of noise, and we get a lot of press. But then how does that information and education move forward?”