Long-time Beaconites are familiar with the story behind Melio Bettina Place, but many newer residents probably don’t know that the street owes its name to a major figure in the city’s history.

In February 1939, Bettina, a professional boxer who lived in Beacon with his parents and six siblings, defeated “Tiger” Jack Fox at Madison Square Garden with a sixth-round technical knockout to win the Light Heavyweight World Championship. It was a very big deal in Beacon. “That was before television,” recalled Vinny Bettina, Melio’s nephew. “Every radio in Beacon was tuned to that fight.” 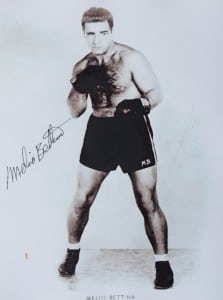 Many residents took special excursion trains to New York City to watch the fight in person, although a snowstorm hurt attendance. Bettina received $750 for winning the title. The purse, which in that era was based on attendance and not television contracts, was always on Bettina’s mind. “The only thing that ever frightened me when I entered the ring was seeing an empty seat,” he told his nephew.

Melio began boxing during the Depression, in part because he could make more money in the ring than at the few, low-paying regular jobs available. His winnings helped support his extended family. His father, Vincenzo Bettina, worked on the Beacon ferry and at what locals called The Biscuit, the Nabisco printing plant that is now Dia:Beacon.

Bettina turned professional and was managed by Jimmy Grippo. He split his training between Grippo’s third-floor gym on Beacon’s Main Street and a facility located at the base of Mount Beacon. Some believed that Grippo, who was also a magician, hypnotized Bettina before his 1939 championship bout. When Vinny Bettina asked Melio about Grippo’s hypnotic powers, his uncle replied, “The only thing he ever hypnotized was the money.” 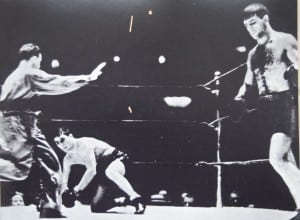 Five months after defeating Fox, Bettina fought Billy Conn in a highly anticipated bout at the Garden. The fight would have unified Bettina’s New York State Athletic Commission title with that of the National Boxing Association, but Conn won a unanimous but disputed decision. The New York Times had Bettina winning the majority of rounds. Bettina also lost a rematch two months later in Pittsburgh, again by decision. The victorious Conn went on to fight Joe Louis, losing to the heavyweight champion from Detroit. (Highlights of Bettina’s bouts with Zale and Conn can be found on YouTube, and below.)

Vinny Bettina said his uncle also wanted to fight Louis but that the Brown Bomber declined to take on the southpaw, who had a reputation as a solid puncher. A fight between Louis and Bettina was scheduled in 1941 but canceled. Vinny recalled that his uncle once said of Louis, “He fought a lot of tomato cans.” Vinny once said he had asked Louis why he never fought his uncle. The champ was said to respond, “It wasn’t smart business to fight your uncle in those days.”

Melio Bettina did eventually meet Louis, although not in the ring. Both served in the military for a period during World War II and were stationed at Camp Shanks in Orangetown in Rockland County. The camp, nicknamed “Last Stop USA,” was the largest point of embarkation for troops headed overseas. Professional boxers fought exhibition matches to entertain the troops. 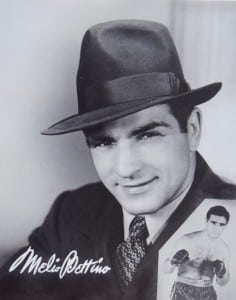 Wearing a fedora made in Beacon, Bettina was featured in Cosmopolitan around 1940 (photo courtesy Vinny Bettina)

Although Bettina probably never sparred with Louis, he did spar with numerous well-known fighters, such as Jake LaMotta, the inspiration for the film Raging Bull. “LaMotta could get a bit dirty,” Bettina once told his nephew. Other notable partners included heavyweight champion Jersey Joe Walcott and light heavyweight champion Archie Moore.

When Max Schmeling knocked out Joe Louis in June 1936, Adolph Hitler sent Schmeling’s wife flowers and a message congratulating “our greatest German boxer.” As part of a propaganda campaign to lessen the sting of Schmeling’s victory, President Franklin D. Roosevelt posed in photographs with Bettina, who was seen as a rising star. Another Beacon resident, James Forrestal, the first U.S. Secretary of Defense, was also in the photos. Beacon’s J.V. Forrestal School now bears his name, as does the aircraft carrier USS Forrestal.

A photo of Bettina appeared in Cosmopolitan in the early 1940s. The black-and-white portrait shows the boxer looking dapper in suit and tie and wearing an Adam’s Hat, a fedora his nephew said was manufactured in Beacon, known then as “The Hat Making Capital of the U.S.” Bettina also made the cover of The Ring magazine in 1938.

Bettina’s last title shot came in 1941 when he lost a decision to Anton Christoforidis in Cleveland. He entered the ring for the last time in 1948. The 5’ 9,” 175-pound leftie fought 100 bouts during his 14-year pro career, with 36 of his 83 wins by knockout. He suffered 14 losses and had three draws. 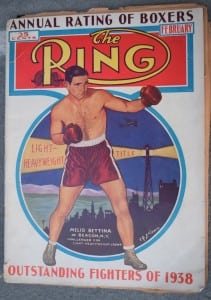 Bettina appeared on the cover of Ring Magazine in 1938. (Image coutesy of Vinny Bettina)

After boxing, Bettina turned to car sales to make a living. He managed Shaw Motors for many years, the local dealership that later became Healy Chevrolet.

Vinny Bettina said he asked his uncle why he had returned to Beacon. “He told me, ‘If the Hudson Valley is good enough for Roosevelt and Vanderbilt, then why not Bettina?’ ” Melio listed St. Rocco’s as his favorite Beacon hangout.

Melio Bettina was inducted into the World Boxing Hall of Fame in Los Angeles in 1996 but was unable to attend due to poor health. His brother Joe and former Beacon Mayor Jim Fredericks, who was a cousin, stood in for him.

Bettina died on Dec. 20, 1996, at age 80. “He was a teddy bear,” another well-known Beacon sports figure, former Notre Dame basketball coach Digger Phelps, told the Poughkeepsie Journal. “You never heard anything bad about Melio. He loved Beacon and Beacon gave it back to him.”