Referendum will appear on March 15 ballot

The stage is set for a public vote on whether Cold Spring should stick with its traditional March election or move it to November, when residents would also cast votes for town, state and national candidates. At their Feb. 2 meeting, village trustees approved the referendum for the March 15 ballot.

A November election would be run by the Putnam County Board of Elections, at no cost to the village, which now pays for the March election. Besides that savings, proponents argue fall elections would give trustees more time to prepare the annual budget. Currently at least two trustees are elected each March, with an end of April budget deadline only weeks away. Those in favor of keeping the March elections say the savings and budget benefits are not significant enough to justify the loss of a village tradition.

Deputy Mayor Marie Early introduced the idea of a referendum in December, listing the pros and cons of a date change. The issue was had been discussed during Ralph Falloon’s time as mayor; the board opted to keep the March date but pay the county Board of Elections to run it.

Although she has not said how she will vote on the referendum, Early speaks positively of November elections. “If we can eliminate $6,500 [in spending], we have to seriously consider that savings,” she said. A change of date wouldn’t take place until 2018, but she said the current board is feeling pressured by its late April deadline to draft the 2016-17 budget.

Budget pressure will no doubt be a factor in 2018, as well. The state-imposed budget cap will allow a spending increase of $1,800 to $3,000 next year and Early has said cuts will necessary. 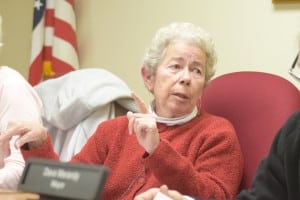 “There will definitely be increases in some costs next year,” she said. “We have little control over salary increases. And it’s difficult to eliminate positions — we don’t have many to eliminate.” She cited health, liability and unemployment insurance premiums as likely to increase.

Early feels a date change could improve budgeting. “If residents vote for a November election it would give those seated on the board more time and control over the budget,” she said. “Having people vested in the budget cycle earlier is a very positive thing.”

She also said planning capital spending is a challenge as part of a tight budget. “We need to do a better job with infrastructure budget needs,” she said. “If a garbage truck breaks down or we need a new police car it’s a problem. If we want to improve office efficiency through increased automation, it’s a problem.”

The state government also plays a role. “The state doesn’t provide the tax cap or growth factor until January,” Early said. “We need to restructure the budget calendar. It needs to be in our faces at the beginning of the year. We’re now in the process of trying to get budget figures earlier.” She said the state determines budget milestones, but “with regard to the latest completion dates, not the earliest.”

Any benefit to budget?

Kathleen Foley, a village resident who has been following the budget process, supports holding the referendum, but not moving the elections. She said she isn’t convinced by the argument that it would improve the budget process.  “The board could do capital planning in July if they wanted to,” she said. She said the operations budget, which she described as “cyclical and routine,” could be dealt with earlier regardless of the election date.

“The budget is a public process done over a period of time,” she said. “Someone is always going to be the new trustee. People considering running for the village board should sit in on budget discussions.”

Foley said she questions the village board’s decision last spring to take on a challenge from New York State to reduce spending by one percent a year for each of three years, which is one reason the cost savings of moving the election are appealing. Residents would receive a rebate check once the efficiencies are implemented. “The ramifications of not meeting those budget efficiencies was never made clear,” she said. “The perception was that if the village didn’t follow through with November elections and save $6,000, the refund checks would be at risk. I’m not sure that was the case,” she said, adding that adequate information was never presented. 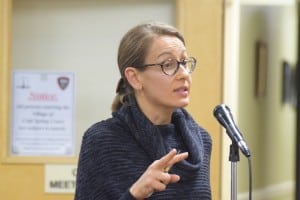 Adding to the confusion, she said, are that efficiencies proposed by the Town of Philipstown and Haldane Central School District would be factored into the refunds. Foley said that trustees should consider whether a potentially small refund check was worth reducing services.

Giving trustees two-year terms deserve discussion as much as the election date, she said. “A four-year election cycle should be looked at,” she said. “It would get us out of a perpetual election cycle that exhausts voters. It would also give trustees time to get their footing and get something done.”

Foley agreed with those who feel a move to November would leave village candidates and issues “getting lost in a cacophony of town, state and national elections.”

Trustee Michael Bowman cast the lone “no” vote on the resolution to approve the referendum and has consistently opposed November elections. In an email to The Paper, he said he doesn’t believe moving the elections “will do anything to increase interest or accountability in the budget process.” He also expressed doubt about any cost savings associated with having the Board of Elections run the elections.

November elections “are an attempt to push the Village … into the realm of national politics,” Bowman wrote. “It isn’t a secret that Philipstown’s political registrations weigh heavily to the Democratic side, and that in recent times [at all levels] it has been the exception that people will cross the aisle to vote for another party.”

In the past, Bowman said, village candidates have run based on issues, not party identity. “If the election moves to November it is not far-fetched to imagine candidate’s names alongside councilman, supervisor, legislator, governor or president not only in the ballot box, but also on signage throughout the Village,” he wrote. “It will just be one more unique small town trait that we lose.” He said he feared fall elections would “ramp up the party rhetoric locally, causing a more divided community.”

Michael Armstrong, another village resident who closely follows the budget process, weighed in via email. “Apart from saving $6,000 per year, moving (elections) to November would consolidate the noise and disruption of the election cycle from two three-month periods each year to just one,” he wrote. “Voters would go to the polls once, not twice.”

Armstrong said he disagreed with Foley that an improved budget process has nothing to do with election timing. November voting “would shift a highly disruptive event, the election, from falling just before the Village budget is due [in April], to a schedule that would provide an ample window for an in-depth review of the Village’s objectives, constraints, and opportunities,” he wrote.

November elections won’t solve all the village’s problems Armstrong conceded, “but as things stand today, we are almost certain to continue superficial budget reviews that pretend to be tough by arguing about the cost of toilet paper and police uniforms.”

One thought on “Cold Spring Election Date Moves to a Vote”