Three Haldane seniors signed national letters of intent on Feb. 3 to play volleyball and soccer at the collegiate level. The brief afternoon ceremony at the high school was part of National Signing Day, an annual ritual in which student athletes officially commit to colleges and universities. 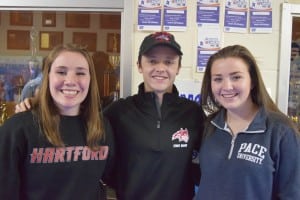 Nicole Etta will attend the University of Hartford to play Division 1 volleyball while studying honors business and accounting. A four-year varsity athlete, she was a member of the 2013 Haldane team that won the Class D state championship. In 2014 and 2015 she was named to the All New York State First Team, the New York State All Tournament Team and the Poughkeepsie Journal All Star First Team. “I’m going to miss Haldane, but I’m very excited,” she said. “It’s going to be a real challenge playing volleyball at that level.”

Macdara Heanue signed to play Division 1 soccer at the State University of New York at Stony Brook, where he will study business management. In spring 2011, he trained at the Empoli Academy in Italy and that fall joined the FC Westchester Soccer Club. In 2014 and 2015, he played for the Everton FC Westchester club as part of the U.S. Soccer Development Academy and was also invited to attend the U.S. Soccer Federation Training Center in Portland, Conn. “I like that Stony Brook emphasizes skills rather than size,” he said. “The coaches and other players were great; it is a very welcoming environment.”

Bailey McCollum, who will play soccer for Division II Pace University, which has campuses in New York City and Pleasantville, has not yet selected her course of study. In four years of varsity soccer, she scored 80 goals, had 48 assists and helped lead the team to the 2014 state championship. Twice named team captain, she was selected as League Player of the Year in 2015. “I’m really excited,” about heading to Pace, she said. “All my hard work has paid off.”