The Putnam History Museum’s first offering in its 2016 Salon Series held on Jan. 30 was a tasteful event. And the taste was whiskey.

More than 50 people attended the $40 a ticket evening hosted by Ralph Erenzo, co-founder of Tuthilltown Spirits Farm Distillery in Gardiner. Erenzo, who is also the distiller at Tuthilltown, provided a historical tour of the American whiskey landscape, including, most recently, the rebirth of small-batch spirits produced at microdistilleries in the Hudson Valley and across the country.

The evening had an air of authenticity as small samples of unaged whiskey (known as “white dog”) and baby bourbon were passed among the attentive audience. Cold Spring’s Max Watman, author of Chasing the White Dog: An Amateur Outlaw’s Adventures in Moonshine, was also on hand to dole out Manhattans mixed using Tuthilltown products. 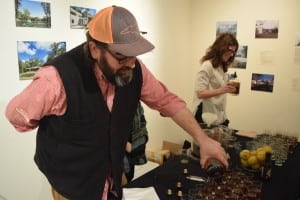 Prior to 1920, there were some 1,200 small distillers operating in New York. Prohibition, which began in 1920, put an end to that. Federal law, known informally as the Volstead Act, made it illegal to manufacture, sell or consume alcohol.

“Prohibition was political,” Erenzo said, “and it ended because people were literally dropping dead from drinking bad alcohol.” After Prohibition ended in 1933, the industry came to be dominated by about 30 distillers that include household names such as Jim Beam and Makers Mark.

In 2007, the Farm Distillery Act enabled small distilleries to produce spirits and to distribute their own products. Under the law, microdistilleries are considered farm operations, while large distillers are industrial. In New York, seventy-five percent of the ingredients used at microdistilleries must originate within the state. “At Tuthilltown we use 100 New York State ingredients with the exception of our single malt whiskey which uses Canadian malt,” Erenzo said.

Established in 2005, Tuthilltown was one of 10 microdistilleries that initiated what has become a growing trend nationwide. There are now 120 small distilleries in New York, including 25 in Brooklyn. Erenzo said that at first, Tuthilltown’s distilling process was developed strictly by trial and error. “In New York we all started from scratch,” he said. “There was no manual, no guidebook. When building inspectors looked at our new facilities they just threw up their arms.” Some of the early methods were rudimentary. Erenzo recalled using a forklift to raise a barrel of whiskey high enough so that it could be drained by gravity.

The Gardiner distiller has grown considerably in 10 years. In 2014 it produced 60,000 proof-gallons of spirits. The following year production increased to 75,000 and Erenzo anticipates that 2016 will see 100,000. Whiskey accounts for more than 95 percent of production. 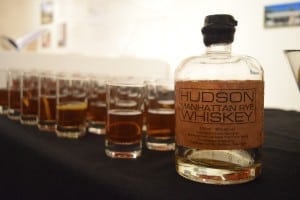 The laws governing U.S. whiskey production require that the oak barrels used to age the spirit be used only once. Tuthilltown purchases its barrels from a cooperage in Kentucky and has also purchased a share of a second manufacturer in Minnesota. Erenzo said that he invested in the Minnesota cooperage after realizing that with a burgeoning microdistillery industry, barrels would become more difficult and expensive to buy.

As a cost-saving measure, Tuthilltown breaks down its used barrels and ships the staves to Scotland where the barrels are reassembled and again used to age spirits. Scottish law permits reuse of barrels.

Erenzo said that unlike the brewing industry, in which large beer producers fought the arrival of microbreweries, large distilleries largely ignored microdistilleries, believing they would not succeed. But there are now more about 1,000 small distilleries across the country. 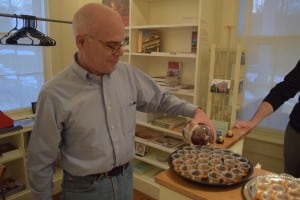 Adding to the farm distillers’ strength is that small distilleries are gaining importance as regional tourist destinations that contribute significantly to local economies. Erenzo used apples as an example. Before Tuthilltown began producing apple vodka, cider apples garnered six cents a pound for local farmers. “The same apples used in spirits increased their value to farmers eightfold.” Tuthilltown purchases apples and grain grown within 10 miles of the distillery.

Tuthilltown Spirits is located in a gristmill built in 1788 and is listed on the National Register of Historic Places. The facility includes a tasting room, tours and a restaurant serving seasonal cuisine featuring Hudson Valley products. Its product line includes six varieties of flagship Hudson Whiskey as well as liqueur, bitters, gin, wheat vodka and apple vodka.