Fear and loathing of dinner: the preparation and execution of it, that is, has been known to strike the best of us, particularly those with unforgiving children with growling bellies. All too often there’s the inclination to give in: to fast, processed, “easy” foods, giving their server an acute aftertaste of guilt. 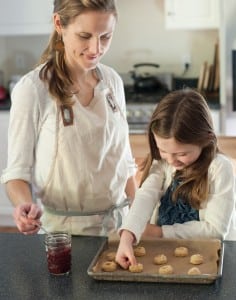 Beyond the recipes, the book was formed from the question Sizemore poses to herself, “What tools do I have so that I can act as, effectively, a sous-chef?” She explains: “I don’t like all the little gadgets that are out there, but certain things — like food processors — can really help with preparation, because prep is often the hardest part.”

Sizemore grew up in a “traditional” household when it came to cooking; traditional in this instance meaning the recent traditions of a harried parent being too busy to utilize her skills. “My mom is a great cook, but she didn’t have a lot of time to cook and so we ate lots of processed food,” she says. “I watched the Food Network growing up and taught myself how to cook from it. When I was in high school there was a shift, and the whole family got involved and now that my mom is retired, she’s become an incredible cook.”

At college in Colorado, Sizemore says she had an “amazing cook for a roommate. I had never had sushi or curries, anything like that, and it opened up my palate.” Moving to New York after finishing school, Sizemore discovered she could have a career in food without being a restaurant chef. She ended up working for a company which imported specialty foods and attended culinary school, then branching out into many facets of the cooking industry. “At culinary school I learned the technical side of things, which I absolutely needed to do, and that opened up other doors to me.” 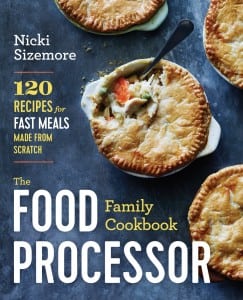 The cover of Sizemore’s new cookbook.

The Food Processor Family Cookbook begins by demystifying its central apparatus: Sizemore says many food processors lurk in dusty kitchen corners because they came equipped with “too many bells and whistles” and are difficult to clean after use. That’s a shame, she says, because “they actually can save you so much time: you can shred a pound of cheese in 30 seconds, for example, or instantly chop up vegetables to make a tomato sauce with, and those finely chopped vegetables then cook faster; it’s the perfect tool for making sauces to set off a beautiful plate of vegetables or a simple seared steak. Food processors use aromatics, herbs, ingredients like ginger and garlic to make sauces in a matter of minutes, which then make for very special meals. Plus, it’s also great for pastries, batters and pie crusts. I’m a cook, not a baker, but with a food processor I can start with wet ingredients, and not dirty a lot of bowls, and that’s important because part of the battle is the clean-up involved.”

What’s key to mastering both the equipment and, bigger picture, putting flavorful and healthy dinners on the table, is menu planning. Just a bit of time spent thinking things out can reduce prep time. “That’s my whole philosophy — meals and recipes that can be made in under an hour. None of my recipes are all that complicated. And there’s always also a wing-it night, otherwise it becomes too overwhelming.”

Some of that comes from developing time management and organizational skills. “If you have that you can do anything,” she says. “Breaking a recipe down and knowing where to start can be as simple as measuring spices before cooking begins.” Experience counts too. “Learning how to use your senses — hearing and smelling the simmering, gauging when it starts to shift; these skills can be applied to a family kitchen.”

Inspiration for creating recipes comes in different forms, according to Sizemore. “It’s sometimes as easy as visualizing, or a photo of food that gets my mind going, or a restaurant meal where I taste, say, lemongrass and realize, ‘I should put lemongrass in my stew,’ ” she says. “But it can also be just forcing myself to use the ingredients I have.”

Sonoma Press approached Sizemore (an editor there was familiar with Sizemore’s blog and philosophy), dangling the idea for the cookbook. Sizemore quickly embraced it, even though her lack of experience in that area was intimidating, “I haven’t ever written a book proposal and I kind of didn’t know where to start so [being given the topic] was a good way to do something with some focus,” she says. 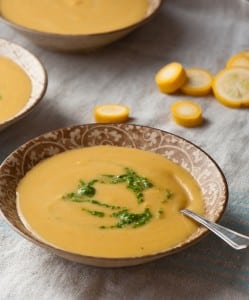 After sharing recipes for the kitchen, which feature sauces, dressings, condiments and spreads, the book moves to recipes for the table, with chapters on breakfasts, snacks and side, soups, salads and dinners of different stripes, including vegetarian and vegan. Every recipe is tagged if vegetarian, vegan or gluten-free. Sizemore feels the book will be of most benefit to “busy families looking to incorporate more wholesome foods into their routines, and also to people new to the kitchen — people who might actually own a food processor, but haven’t dug it out in a long time [but might] take another look at it because it can produce easy, delicious results.”

For the past four years, Sizemore’s kitchen has been located in Cold Spring, which she and her husband first experienced on a day’s drive out of the city. “We stopped at the farmers’ market when it was outside Butterfield, and I thought ‘We’re going to move here someday,’ ” she recalls. After a brief sojourn in Connecticut, which wasn’t right for them, they upped and moved to a place which was.

“Within a couple of months we found a community of really good friends, and with access to amazing local food,” she says. “Going to the farmers’ market can plant some lightbulbs, like, ‘What can I do with a pound of kohlrabi?’ ” Sizemore taught some classes at the Philipstown Community Center and now teaches private classes, either in demonstration or full, hands-on participation format.

Together with her blog, the notion of writing another cookbook someday and just making the meals in her own household, she is happy with what she’s doing and where she is, noting, “My roots are planted here now.”

The Food Processor Family Cookbook is available locally at the Cold Spring General Store on Main Street in Cold Spring, or through Sizemore’s website at nickisizemore.com.