When Suguru Miyagi takes a stroll in an urban area, he registers the architecture, the pace, the people, but his eye also takes in the less obvious, or, as he describes it, “I notice the ordinary, and then I bring it to a different place.” The Garrison-based designer revels in the smaller things which punctuate these settings: torn-off strips of duct tape or remnants of posters removed from walls; the creases and folds of strewn plastic garbage bags. “I love the action, light, movement of them.” 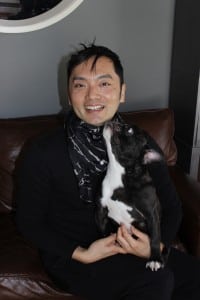 Textile designer Suguru Miyagi, wearing one of his own creations, accessorized by his color-coordinated French bulldog.  (Photo by A. Rooney)

Miyagi has worked for years in the fashion industry, designing graphics used on textiles by labels like Calvin Klein, Kenneth Cole, Tommy Hilfiger and Levi’s, as well as working on logos and branding. More recently, he has created his own line, Suguru, which consists of luxury silk and silk-cotton printed scarves with imagery developed from what transfixes Miyagi: urban landscapes.

With observations made in abandoned, then redeveloped yet not completely sanitized parts of New York City, where he used to live, and Beacon — which passes for urban, locally — Miyagi transforms them, using the Japanese concept of wabi sabi, which he describes as “beauty in imperfection.”

Likening it further to a Zen Buddhist principle (though he tempers it by cautioning “not to make it too lofty or spiritual”), he explains: “The spiritual world emerges from poverty and desolation. If you turn it on, you can see things in ordinary things. I don’t use conventional beauty.” Or, as a fellow artist described it to him, “You do the high-low thing.”

(For all his attraction to the beauty of grit, Miyagi’s Garrison home, which he shares with his partner and their French bulldog, is surrounded by woods, curtained off by trees during the verdant seasons.)

Most of Miyagi’s designs are created digitally after a lot of drawing and conceptual thinking. Often, small touches of Japanese iconography are incorporated, as befitting someone who grew up in Okinawa, Japan, where, he recalls, his “mother used to always wear silk scarves.” He moved to New York at 19 to study at the Fashion Institute of Technology, after a brief sojourn at a community college in upstate New York, which he hadn’t realized wasn’t New York City when he applied there. “The first winter was shocking!” he recalls. 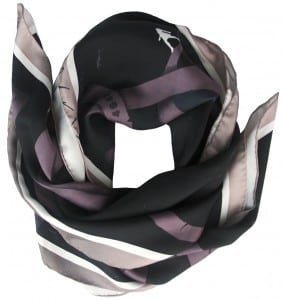 Miyagi returns every few years to Japan, where some of the scarves and stoles are hand-printed and hand-stitched; others are made in China — Miyagi’s background in the fashion industry aided him with the manufacturing. Some of the seven individual designs, each in a specific color, are inspired by nassen, a traditional, multi-step Japanese silk printing technique utilizing rice paste. These are set on either silk-twill or silk-cotton fabrics.

He began by marketing the scarves through his website; he has since expanded into wholesale and plans to reach out to retailers. He hopes to design pillowcases, as well. Miyagi participated in the three-year-old Beacon artisan fair Work:Shop during the past two years after attending the first as a customer. 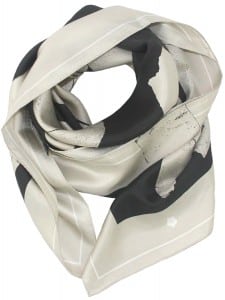 That experience surprised him; “I’m a little shy and I didn’t think I would enjoy talking to people as much as I did,” he says. “I didn’t realize how receptive people could be about the subject matter [of the designs on the scarves]. I expected that in Williamsburg, not here, but paradoxically, being here you often think about the city — maybe it works that way. If I spend more time in the city again, maybe I will start making nature designs.”

As for how to wear the scarves and stoles, Miyagi is considering doing a YouTube tutorial, but he says that, really, “it’s up to you. Most women wrap the silk ones in sort of a posh, Hermès-type way, but because my aesthetics are a bit rock ’n roll grungy, I like them worn casually. With the silk-cotton blends, just throw them around your neck.” Above all, “feel happy wearing it, and confident.” That, he says, “is the best part of this.”

Miyagi’s scarves can be shipped worldwide. Visit sugurustudio.com, or The Roundhouse in Beacon also carries his designs at stackroundhouse.com.