The CineHub is just that: a hub for those working in cinema. Much as collaborative workspaces for freelancers with desk jobs have flourished, The CineHub provides a creative and social center for filmmakers and video production professionals in the Hudson Valley.

“We wanted to create a culture here,” explains Tara Latorre, who partners in the enterprise with Edward Roy. “We knew there were a lot of professionals in this industry working in the Hudson Valley, and wanted to bring them all together. We started with annual mixers, to get to know each other, and that led to developing this space.”

Its space, at the back of a Beacon complex a stone’s throw from the Metro-North station (making it convenient for a city commute), began “completely raw,” says Roy, who runs a production company, J6 MediaWorks. The build-out began in January 2014 and the space is still, intentionally, a work in progress, transformable depending on the needs of the people using it at any given time. 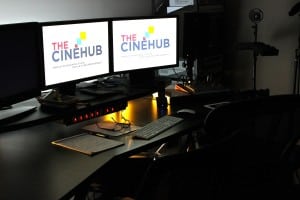 The editing suites at The CineHub provide equipment which has many functions, including sound editing to color grading. (Photo by A. Rooney)

There is a large editing suite, as well as smaller private and semi-private editing rooms; a 700-square-foot soundstage studio/product photography room with green-screen capabilities, which, with the addition of benches, transforms into a screening room; cubby work spaces; a common space which doubles as a green room; and a “huddle room” for conferences and client meetings.

All of the components of the space are rentable, either on a flat-fee, project-based basis, or hourly to annually for freelancers and others with less extensive needs and requirements. The editing suites can be used for anything from sound to color grading; the “cubes” (cubby spaces) were being used by an editor and a cinematographer at the time of The Paper’s visit.

The sound stage, in its screening-room capacity, hosts films under the banner Cine Beacon every Second Saturday from April to November, showcasing Hudson Valley filmmakers and/or films made in the Hudson Valley as well as emerging filmmakers. It has been the site of Beacon International Film Festival events and can seat 60 to 70 people. 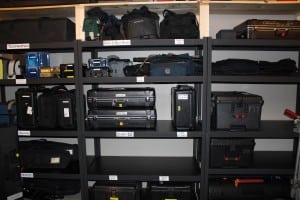 Shelves at The CineHub, filled with rental equipment, including teleprompters, monitors, rain hoods, tripods and cameras. (Photo by A. Rooney)

The CineHub also rents out equipment: tripods, cameras, microphones, lenses, filters, video monitors, teleprompters, light panels, dolly kits. Members can rent out their equipment (as most aren’t shooting things all the time) instead of having it gather dust in a corner.

Roy, who grew up in Washington state and spent time in the U.S. Air Force as a jet mechanic, came to New York for college, first studying filmmaking at Brooklyn College, then transferring to SUNY New Paltz and earning a communications degree. He worked in an animation studio in the city, then traveled, eventually returning there, working as a freelance editor, producer and camera operator. Upon moving to Beacon in 2008 he discovered “a lot of disconnected filmmakers,” he says. “They would head into the city for jobs. There seemed to be a need to connect. So I started by doing mixers, then thought ‘Wouldn’t it be nice if there could be a place to come to work next to each other?’ ” 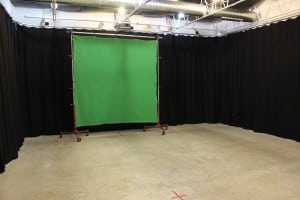 The 700+ square foot soundstage doubles as a screening room, with benches stored behind the curtains.  (Photo by A. Rooney)

Latorre, who was working for Roy at J6 MediaWorks after graduating from SUNY New Paltz with a degree in media production, recalls that they were looking for new office space. “We saw this and something just happened — we knew it wouldn’t be just office space,” she says. “We jumped in … and since then it has always been transforming, which isn’t a bad thing.”

Roy concurs: “First we were a collaborative center, then after a year we became a resource center, because not everyone needs a long-term space and we found we couldn’t rely on that sort of participation alone. Collaborating, while one of the opportunities here, was too narrow a scope. As we build it, we see that many of our peers are missing company … You come to work and get immersed.

“Unlike a place like the [collaborative workspace] Beahive, we wanted to focus on one particular industry. When we bring in qualified and busy professionals, they cross-pollinate.”

Latorre adds, “We’ve heard from members that they like looking over and seeing others working — it stimulates them.” 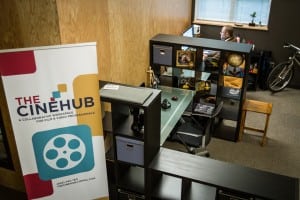 Smaller ”cubby” spaces are available for rent at The CineHub. (Photo provided)

Most of CineHub’s business (about 75 percent) is commercial, with the remaining being “personal, passion projects,” according to Roy, who notes they also do some pro-bono work, most recently for the New York State Special Olympics taking place in Dutchess County in February. Much of the business has come “through getting people here during events, spreading the word via social media, things like that,” Latorre says. “We’re just very connected with a lot of the filmmaking community.”

The pricing, much lower than that of similar facilities in the city, is an inducement, and with the ease of walking from the station, Roy and Latorre hope to attract more city-based production personnel. The CineHub is open from 8 a.m. to 6 p.m. Monday through Friday and can also be booked for after-hours and weekend work. Events, screenings and workshops also can be booked.