As more new residential housing is built in Beacon, the expected impact will be the expansion of the tax base to support the city’s growing economy. At the same time, however, officials are likely to find themselves at odds with two important Cs: character and cars.

Indeed, the city’s character — and how to maintain it — and residents’ cars — and where to park them — were the two issues raised during a sparsely attended but at times energetic public hearing on Tuesday night (Feb. 9).

The Beacon Planning Board held the hearing to gather feedback on the redevelopment of the historic Beacon Theater, a project that drew more than 80 people to a public meeting in October but only a handful on Tuesday night. Sandwiched around that hearing, the board approved a residential/retail project that will bring 28 apartments and more than 11,000 square feet of retail space to Main Street. It also scheduled a public hearing for next month on another 50-unit project near the Metro-North train station.

More than 400 new apartments and condominiums have already been approved and are in various stages of construction around the city, with 75 to 100 of them potentially ready for occupancy in 2016.

The 80-year-old Beacon Main Street Theater was sold to Brendan McAlpine of McAlpine Construction last year after the previous owner, 4th Wall Productions, fell behind on mortgage payments. The McAlpine family also restored the factories on East Main into the complex known as the Roundhouse, which is considered to have been the catalyst for the transformation of Beacon’s east end. 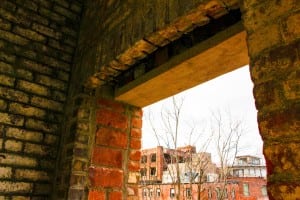 Beacon construction area near the Roundhouse (Photo by Anita Peltonen)

This time around, McAlpine drew some criticism when he abandoned 4th Wall’s plan to restore the space to an 800-seat theater, instead announcing his intention to introduce a 195-seat multi-purpose performance space along with 32 residential units.

While Tuesday night’s hearing was lightly attended, it gave a few residents a forum to express their concerns with the theater’s redevelopment.

Theresa Kraft and Donna Francis, who represented the Beacon Historical Society, spoke separately but had the same message — each called for a citywide moratorium on new apartment buildings, especially those that encroach on historically significant areas within Beacon.

“Our city’s history is an important part of American history,” Kraft said.

Anthony Fox owns the nearby 463 Main Street building, and he told the board he believes parking will become a major issue on that stretch of Main.

“We have no parking at the moment, and when you add that many units, where do we go?” he asked. “We’re parking two blocks [away] on the weekends.”

Planning Board Chair Jay Sheers explained that the board doesn’t always have the jurisdiction to require building applicants to provide additional parking. A provision in the city’s zoning code indicates that structures and land uses in existence prior to 1964, which would include the theater, are not subject to the parking requirements that newer buildings would be.

The board’s charge is to determine if building projects meet the city’s stated requirements, not to judge projects on their individual merits, Sheers said. “There are legal limits to what we can do,” he said. “We’re doing what we can do.”

As part of its review, the planning board asked that theater developers look into restriping the section of Van Nydeck Avenue that sits between Teller Avenue (Route 52) and Tioronda Avenue, behind the theater, for maximum parking efficiency. The street is not currently striped for parking.

As for a moratorium on new building, Sheers said that if such a request were ever considered, it would be by the City Council, not the planning board. Council member Margaret E. “Peggy” Ross sat in the front row for Tuesday’s hearing.

In other business covered Tuesday night, the now-approved 249 Main Street project will bring housing and retail to an existing space at the corner of Main and South Elm Street. City Building Inspector Timothy Dexter said Wednesday that he believes the relocation of the site’s present tenants will begin this summer.

Also set for a public hearing next month is The View, a 50-unit residential project proposed for the wooded area on Beekman Street, southwest of City Hall. After leveling the hill between Beekman and City Hall, the development proposal includes as a visual amenity a rooftop garden, which will be roughly level with the stretch of Route 9D that runs in front of City Hall.

The River Highlands project, another development not discussed Tuesday but proposed near The View, could potentially add 70 units on a neighboring lot off 9D, south of City Hall.