Three candidates have qualified for the upcoming Cold Spring Village Board election, according to the Putnam County Board of Elections, the agency that will oversee the voting on Tuesday, March 15. The race is for two open seats as incumbents Michael Bowman and Cathryn Fadde did not file for reelection. 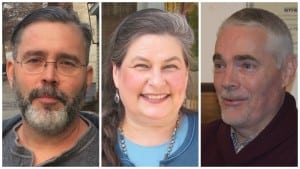 Expected to run as a team are Lynn Miller, co-proprietor of Main Street’s Go-Go Pops food store and Steven Voloto, owner of a local general contracting business, SDV Contracting. Miller had previous experience as a village trustee when she was appointed to fill a vacancy for a year by then-Mayor Seth Gallagher in 2009.

Also running is Barney Molloy, the former chairman of the Village Planning Board who oversaw the approval process for the Butterfield development project now under construction on Route 9D in the village. Molloy ran for mayor last year against Dave Merandy, losing by a two-to-one margin. Molloy, also a former member of the Village’s Code Update Committee, resigned in protest last year over Merandy’s decision to change the consultants working for the committee.

Like many local governments in New York, Cold Spring finds its budget squeezed by a state law that keeps a cap on revenue-raising through property taxes. Accordingly, the new trustees will find themselves grappling with difficult issues such as maintaining the current level of services, including the village police force, while costs (for salaries, healthcare and worker’s compensation insurance) race ahead of revenues.

Implementing the village’s adopted Comprehensive Plan is another challenge involving, among other things, updating the zoning code and finding new sources of revenue such as the use of the boat club site after the environmental cleanup project is over or the possible introduction of paid parking on Main and other streets.

Funding capital projects such as repairing village dams and upgrading the water treatment plant are also on the agenda.

The candidates will all be offered an opportunity to be interviewed by The Paper/Philipstown.info and are invited to participate in our election forum.  Look for an announcement soon.

Also on the ballot

Cold Spring voters will also decide on whether to move local elections from the traditional mid-March date to the national Election Day in November.  If approved, the change would take place in 2018.

Thomas Robertson, who lost last year in a runoff with Danielle Pack McCarthy, is the only candidate who filed with the Nelsonville Village Hall for that village’s election.  There is one seat open; incumbent Will Duncan is not running again. Nelsonville conducts its own elections.