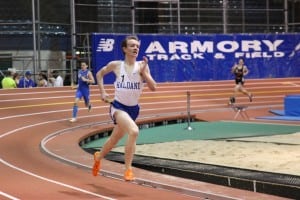 Nick Farrell of the Haldane relay team races to a first-place finish in the 4x800m event in the League Championships held at the New York Armory Track & Field complex in New York City on Feb. 6. Farrell and teammates Kenney McElroy, Theo Henderson and Jonas Petkus set a school record with a time of 8:31.45. 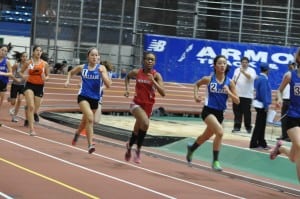 Heather Winnie (2) and Ruby McEwen (1) compete for Haldane in the 1000m at the League Championships at the Armory in New York City on Feb. 7. McEwen placed first and Winnie third.