After 12 years as executive director of the Hudson Highlands Land Trust (HHLT), Andy Chmar will retire on July 1, to be succeeded by Michelle Smith, a Cold Spring resident who has served on the environmental organization’s board since January 2014.

“Michelle combines extraordinary credentials with a deep commitment to both our organization and our region,” said board chair Nancy Berner. “I can’t imagine a better person to lead us at this time in our mission to protect the Highlands.” 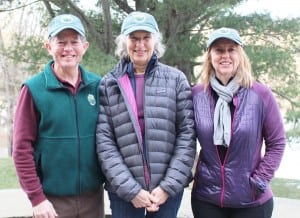 Smith most recently was a managing director in the Investment Banking Division at Goldman Sachs & Co. A native of Australia, she also has served in leadership roles with the Sierra Club and Georgia ForestWatch. She currently is on the advisory board of the Beacon Institute for Rivers and Estuaries and helped found Renewable Highlands.

The Hudson Highlands Nature Museum will honor Chmar at its annual New York City benefit, to be held from 6 to 8 p.m. on Wednesday, Feb. 24, at the Chelsea Park, 260 W. 26th St.

After attending West Point and serving 22 years in the U.S. Army, Chmar retired in 2000 as a colonel and settled in Cold Spring. In 2002 he and his wife Gayle (also a U.S. Army colonel) and three neighbors partnered with HHLT to preserve more than 70 acres adjacent to their properties in the North Highlands.

Soon after, he joined the HHLT board and, a year later, became its executive director. During his tenure, the land trust has grown from one full-time and one part-time staff member to six full-time professionals, and the land preserved by the trust has quadrupled to more than 2,200 acres on both sides of the Hudson River.