Most “what you should never do” lists for starting a business include: (1) don’t plunge ahead without doing a great deal of research and planning, and (2) don’t become business partners with a casual friend.

Those recipes for disaster have instead become ones for success for Sharon Burns and Christine Lawrence, co-owners of Beacon’s specialty shop, Dance Bag, which has held its own for 10 years in the face of larger dance merchandise stores like Capezio.

Occupying the northwest corner of Chestnut and Main, the store draws students from Pine Bush to Peekskill and from across the Hudson. Its owners have kept costs down by splitting the work week, allowing each to spend more time with their children when they were small. In the long term, they have not had to hire additional staff. Some customers, used to coming to the store on a particular day of the week, perhaps in tandem with taking a dance class, have never met one or the other despite shopping there for many years. 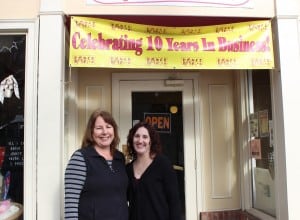 The store began after a fifth-grade friendship between their daughters. “They were 10 years old, and went to a lot of dance competitions together,” explained Lawrence, who was raised in Rochester and moved to Beacon in 1996. “We noticed there were a lot of vendors there. We had never seen that kind of fun stuff at the local stores around then; it was all just black leotards. We thought it would be great to have a place like that in Beacon.”

Dance Bag opened only three months later, on “sort of a whim,” according to Burns, who grew up in Westchester and moved to Beacon in 1988 as a newlywed. Despite having no retail management experience, the women jumped in. Fortunately both had bookkeeping experience.

There was a learning curve. “Inventory was a big problem in the beginning,” says Burns. “There were some companies which wouldn’t ship to us because there were other businesses in the area and there were rules.” Bloch and Capezio said they would, however, so they placed their first orders there. “But we didn’t order enough and we wound up with, like, one of each size,” Burns recalls. “By September, when it gets really busy, we had a problem: every day people would come and buy our one thing of each that we had!” 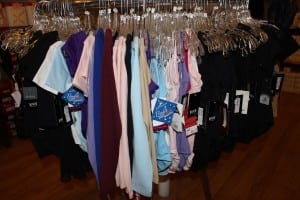 Leotards in a variety of colors (and black). (Photo by A. Rooney)

At the same time, they didn’t have to compete on price with the larger dance stores, thanks to the institution of minimum pricing on certain popular products (including pointe shoes) dictated by dancewear manufacturers specifically to keep small places afloat. No stores are allowed to sell items below a certain percentage-based price point, which was a set amount below retail.

With those restrictions in place, Dance Bag has been able to focus on the upsides of running an independent, community business, including service, which extends to shoe sizing (some stores charge for this service if you don’t purchase shoes) and keeping track of sizes for return customers who have forgotten what fit. As a result, “we have a lot of customers who will only shop here,” Lawrence says.

Even though a quick scan of the premises reveals a lot of pink, the bestselling color is still the traditional black. What of the frequent scenario where the child picks out the most expensive shoes and the parent begs to differ? “We try to have a spectrum of prices from economical to high-end, and plenty in between,” Lawrence says, “We have situations where some moms want shoes two sizes too big ‘to grow into.’ We have to explain that it’s not like Nikes, it can affect things like ankles.” Early on, both owners received training in the complex variations of pointe shoe fitting; in the meantime, they have been self-taught.

Having been open for 10 years, the Dance Bag owners have watched their customers grow up. “We’ve seen girls go from elementary to college age,” Lawrence says. “We’ve seen them learning to drive, then arriving without their moms and with their own credit cards. We see them through the awkward years, with the braces, and then they turn into beauties. And yes, they do see some boys too, more since the popularity of shows like Dancing with the Stars and So You Think You Can Dance. Most who come in here want to be dancing, they’re not dragged in. And they’re doing things like jazz and hip-hop.” 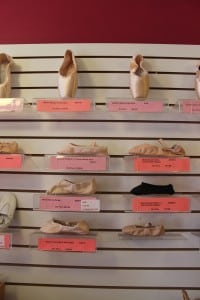 Pointe shoes and ballet slippers, along with tap, character and other dance shoes, line the walls at Dance Bag. (Photo by A. Rooney)

Burns adds: “We know when there’s been a new class added at one of the studios we work with.” She and Lawrence also visit Newburgh’s Bishop Dunn Middle School each year during school musical time to fit and take orders for all the shoes.

Not much of Dance Bag’s clientele is tourist-driven, although “every now and then city people get excited when they see us and come in during the weekend,” Lawrence says. “We market to the dance studios, and if there’s something they or an individual wants us to carry, we’ll find it.” They also sell gift cards (“sometimes grandparents in other states call us up to order them”), offer birthday and tights club (buy 10 and get one free), maintain a large email list and hold regular sales.

One thought on “Light on their Feet”